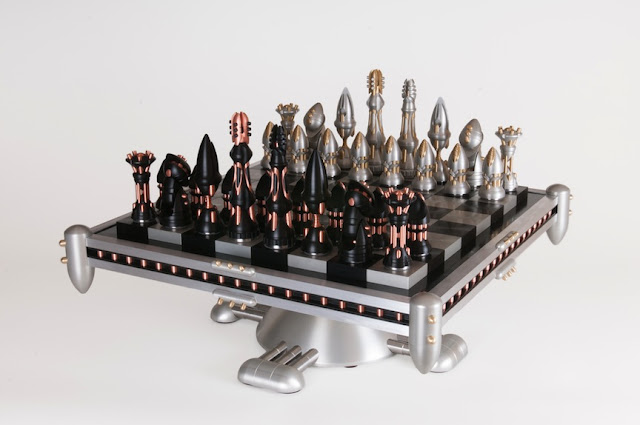 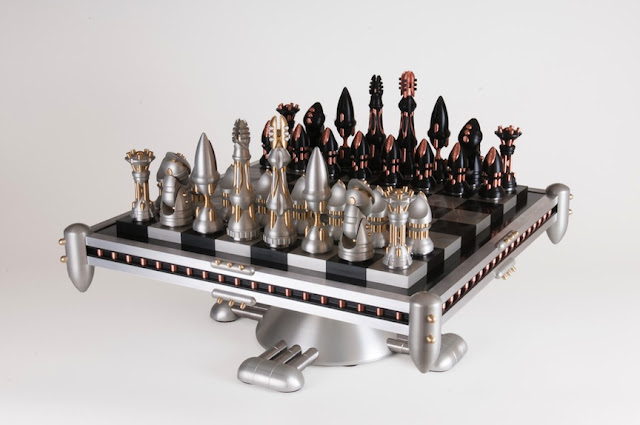 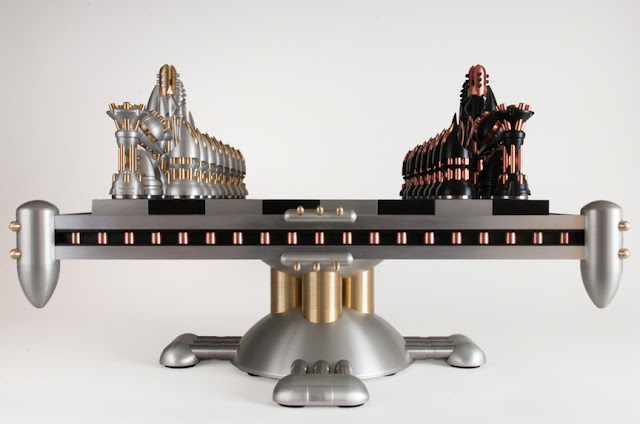 This always flatters me, but I always decline. It is not that I don’t think some of the ideas would make for interesting projects, or that furniture or anything with function is somehow beneath me. It is simply because, as an artist, I am just much more interested in my own work, which involves exploring that blurry space where objects with no function begin to suggest that they might have one, without ever truly making that transformation. It is objects that defy categorization that most interest me, and I try to limit things that will distract me from that. 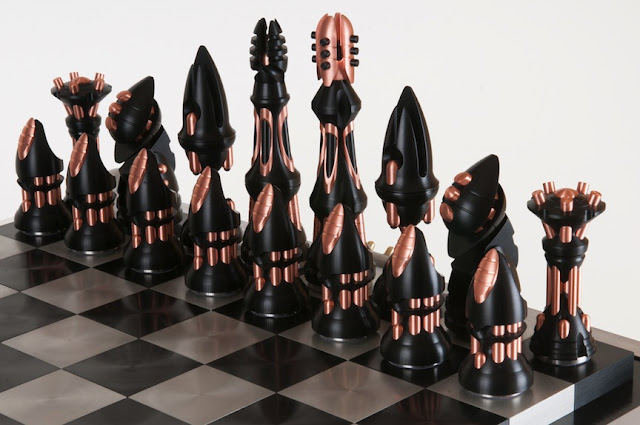 But the proposition of making a chess set, held a number of unique challenges and opportunities that I just could not resist. 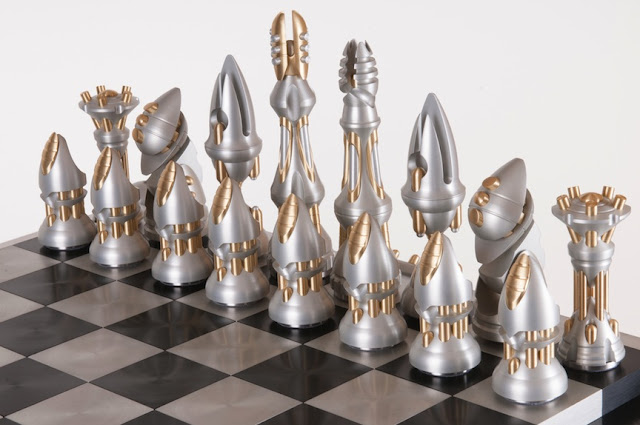 For one, there is actually quite a long history of fine artists creating chess sets. Marcel Duchamp, Bauhaus, Calder, Damien Hirst, Yoko Ono and too many more to list, have all designed a chess set for one reason or another during their careers. So it would seem to me, that there must be some sort of universal appeal to this particular exercise for artist of all kinds. 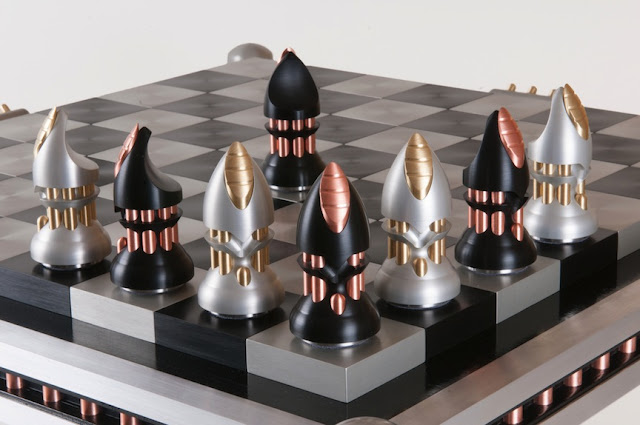 Additionally, I personally have a short history of making two separate chess sets in my youth, which I had all but forgotten until this project surfaced. My first, I built when I was in middle school. I had stumbled across a large box of hardware and bolts in my basement. A find that I quickly and instinctively assembled into a crude chess set made of wing nuts and other fasteners. And then again years later, when in high school, I set about commissioning my classmates and artist friends to each create a unique set piece based on their particular art for a community board I was making. 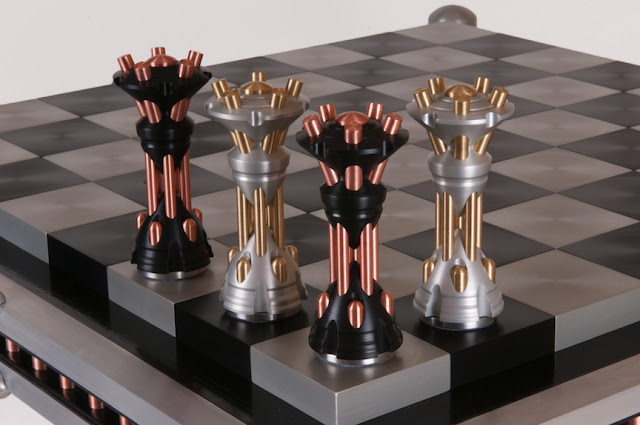 I think chess provides a unique medium, because though each piece is symbolic of a function, it does not have a rigidly defined form, and so there is a lot of room to work with when designing, yet the frame work of the game provides an interesting context for the pieces one makes. So when a patron of mine asked me if I might consider designing a new set based solely off of the language of my current body of work, I jumped at the chance. 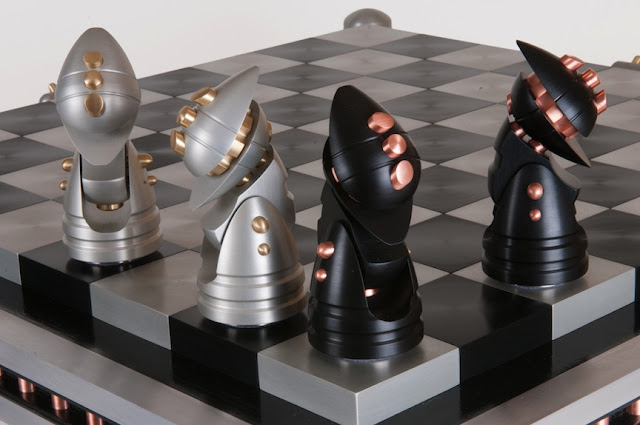 Little did I realize at the time what a monumental challenge it was going to be to make pieces that remained true to my aesthetic while performing their function in a playable chess set.  During my research, I discovered that many fine art chess sets are purely conceptual works, they sacrifice their ability to be a playable set in order to make some sort of point or to subvert the purpose of a chess board entirely. 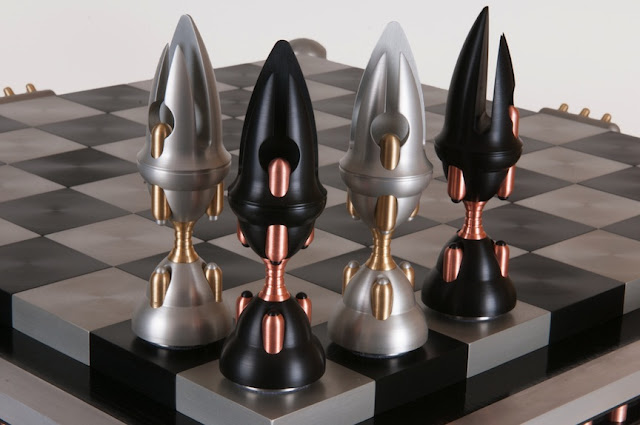 One thing my patron wanted, and indeed that I wanted as well, was that the set not only remain playable, but to do so exceedingly well. 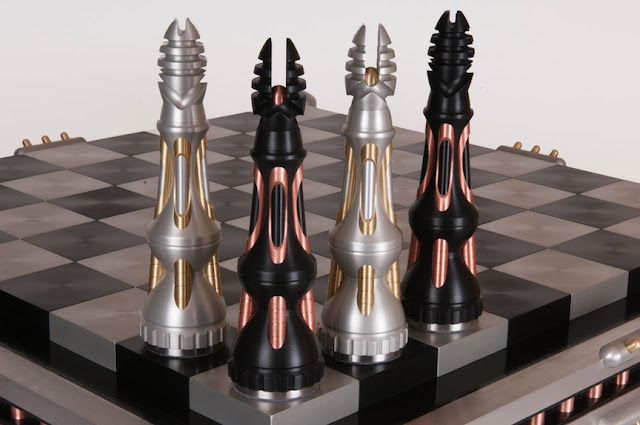 This might well be a compromise to some artists, but I have always felt being subversive was sort of low hanging fruit, blowing things up and making them purely about you as an artist can often be the simple route. So for me in this case, maintaining playability represented a basic respect for ones medium and merely provided the constraints that I needed to work within. This is actually one of the core ideas I work with on a daily basis, I am endlessly fascinated how constraints themselves can be a powerful creative catalyst. So the constraints of a chess game seemed no different, so long as it did not inhibit what is most basic about my decision making process. 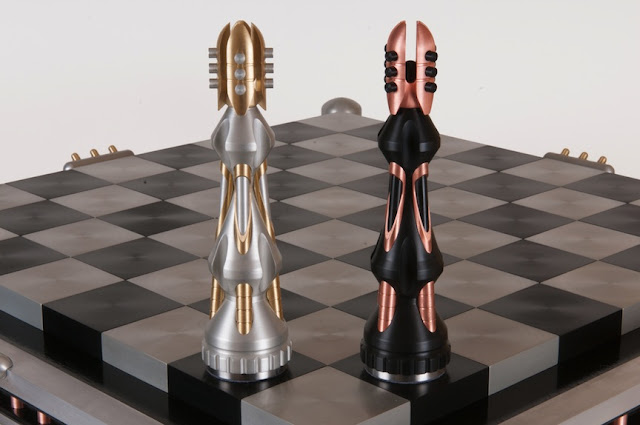 From the earliest sketches and conversations, on up through its lengthy construction phase, this project has taken well over a year to design and build. But in the end, I think I was able to thread the needle and make a set where each piece truly functions as its intended symbol in a playable chess set, while also being able to stand-alone and be recognizable as one of my sculptures and pare that with a chessboard that stands as a sculptural object in its own right. 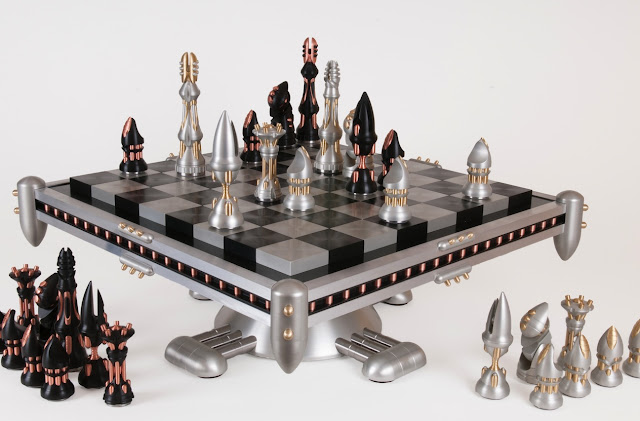 So after this long process, I am happy to share the final images with you all. But now I am eager to start working on the many, purely sculptural ideas that have been piling up while I have been so busy working on this project. So keep an eye out, as I hope to have some works coming out in just a few short weeks.