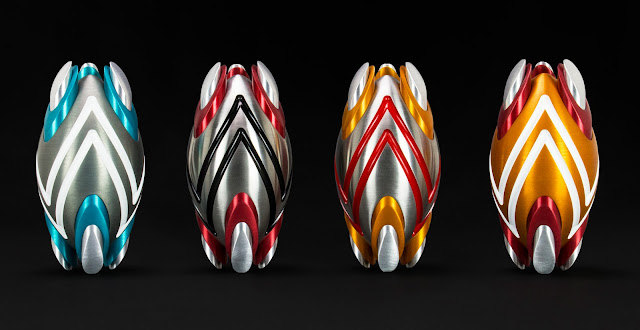 I have been hard at work on a pair of large Sculptures, but completion of them remains quite a ways off. After several weeks of toiling away, and with quite a few more weeks left to go in the build, I decided it was time to take a creative break from the long slog of the big build.

To clear my head I turned my efforts to something smaller. Something that I could get out into the world a bit sooner. So here we are, at the end of that break with some new works for November!

I also thought I would take this opportunity to share a couple of other side projects I have been working on this year. Some collaborations with other artists and craftsmen that I have found very fulfilling. 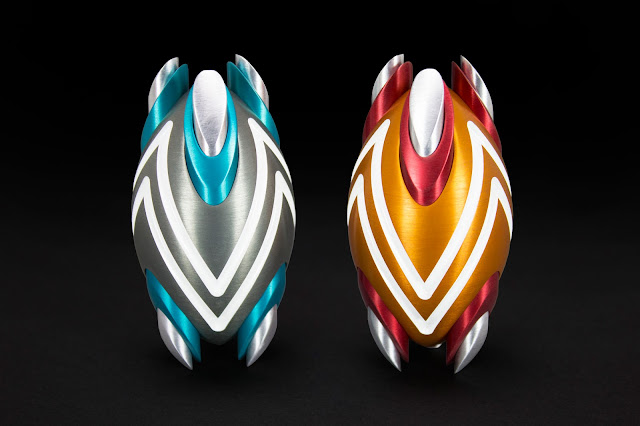 These little experiments are a continuation of the color process layering work I have been doing as of late. I decided earlier this year to revisit some of the powder coating work I started many years ago. I have been mixing the use of the colored powder with re-machining as well as anodizing, and the results have proven very promising.

I always feel it is easier to take risks and try out multiple combinations all at once with these small editions, one of the reasons I do them so frequently. As always, I tried to take full advantage of that luxury, but I likely could have made quite a few more of these, as there seems plenty of room to experiment further. 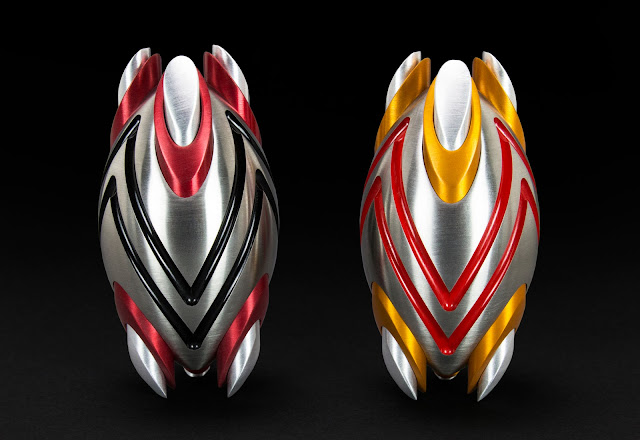 The pair with the Stainless steel bodies have a bit more heft than the pair with the anodized aluminum bodies, but both feel very nice in the hand. The pin-striping style details could not have turned out better, and I am glad I dug out my old supply of red powder as it really speaks to that look. 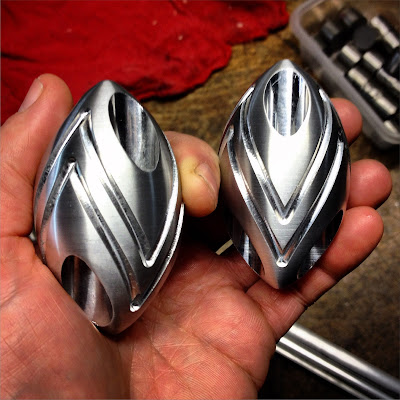 A shot of the aluminum blanks right after milling. These looked nice all by themselves.

Since this was a relatively quick study (I do mean relative), I did not make a proper drawing this time around, so we will have to do without.

Anyhow, they turned out great and I look forward to getting a bit of feed back on them. 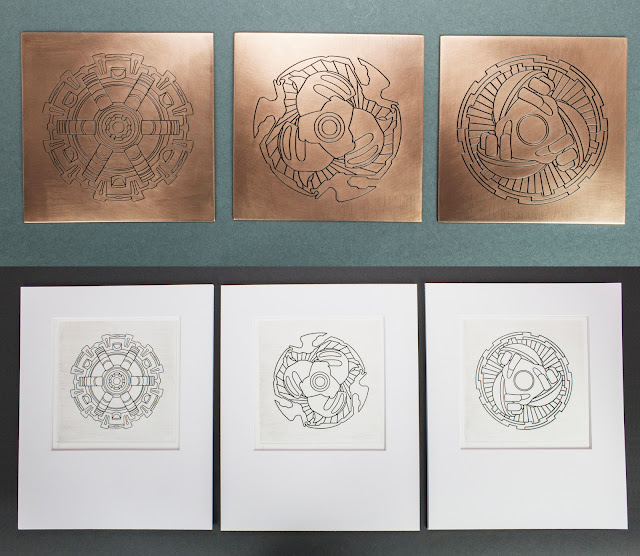 OK, Now For My Side Projects.

Over the last year, I have been meeting with Matthew McLaughlin, a print maker in the Washington DC area, as part of a cross discipline collaboration.

Matt has been collaborating with Scientist, engineers and other artist over the years to build a print portfolio that looks at the similarities between art making, and the scientific method. So when Matt approached me and explained what he was doing, it was immediately apparent there was plenty I could learn from such a project, so I happily agreed to see where a joint project might lead.

We took our time and experimented with a wide range of ideas over the course of a few months. We hit some dead ends, but eventually decided on doing a series of engraved plates that spoke to both the drawing style I use in my technical prints, and also the iconic nature of the sculptural objects themselves.

You can read more about the project and some of Matts other artist collaborations on his Blog, linked below 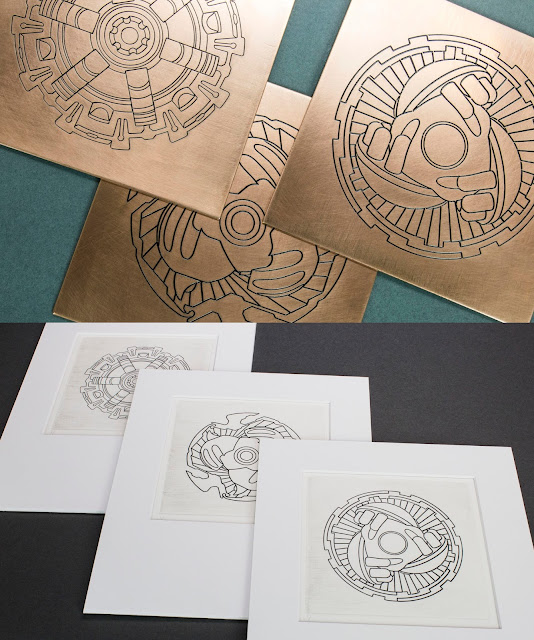 The drawings for this project were adapted from existing works, I borrowed pieces that could be produced exactly to scale, and sort of built on them to create something reminiscent of a logo, but without the need for text or branding. As with most of my work, I like to strip away everything that is unnecessary in a design.

With a little modification, the copper printing plates were engraved right on my CNC mill. We did some proof printing, refined the plates further, and then I handed them off to Matt to run the full print edition. The prints turned out great and are currently in the process of being individually numbered, titled, and signed. I am also quite happy to have the copper plates as an artifact of the print process.

A very limited amount of signed and numbered prints will be available to those who are interested, so do get in touch if this is a project that appeals to you. 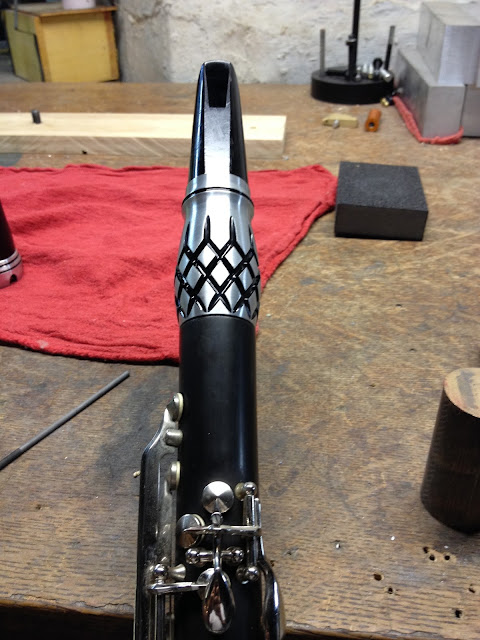 My Second Side Project Is One Of A Musical Nature.

Earlier this year, I met up with Clarinet maker and machinist Wesley Rice. He is the owner and operator of a specialty Clarinet repair business out near Maryland's eastern shore
(see here).

Wes came to visit me at my studio a few months ago and we soon got to talking about the similarities (and differences) in what we do for a living. He asked if I might be interested in helping him work out some designs for custom barrels for his clarinets, he was curious if some of my visual ideas might translate into parts for a musical instrument. 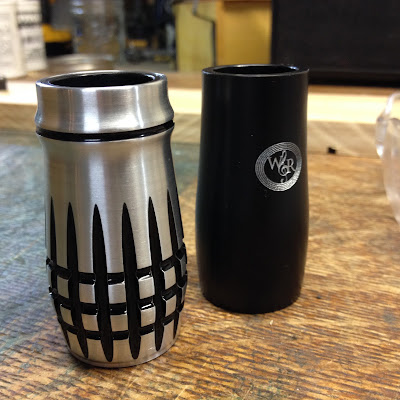 While not my usual cup of tea, making parts for musical instruments seemed appealing to me. I usually shy away from straight forward utilitarian objects, but much like the chess set, there seemed to be something visually compatible with what I was doing, not to mention that I am much more receptive when I think there is domain knowledge to be gained from a particular project. I knew next to nothing about instrument design, so I thought there was a great opportunity to learn something new.

I got a great crash course in the different materials used for building clarinets, obviously wood, but also some crazy hard rubber I had never heard of before, as well as more modern plastics which were fun to try and machine. I learned a little about how geometry can effect the sound of an instrument. I also found within this project, an opportunity to dovetail what I was doing with powder coating and apply it in a new context.

I had to be a little more restrained than usual as far as design choices, but the first results turned out quite nice and are pictured above and below. 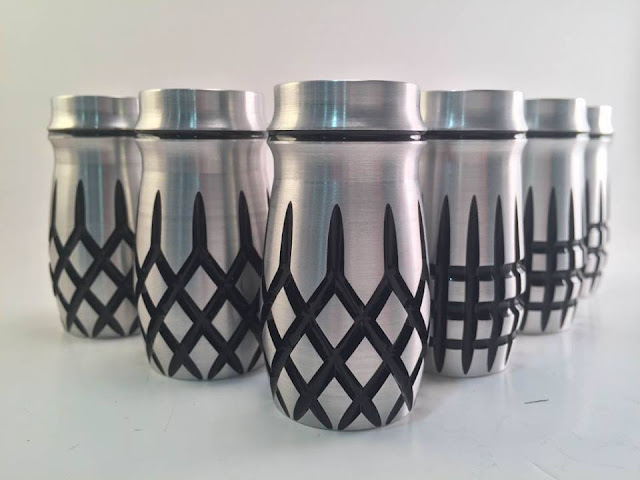 The work I did on this project directly influenced my newest edition, as may be apparent.

The inlays on these and some of my more recent works is suggestive of pin-striping, and though very ornamental in nature, has me thinking on new ways of experimenting with texture, even if in a very minimal way.

Anyway, a very exciting project that Wes and I may yet expand on in the future. 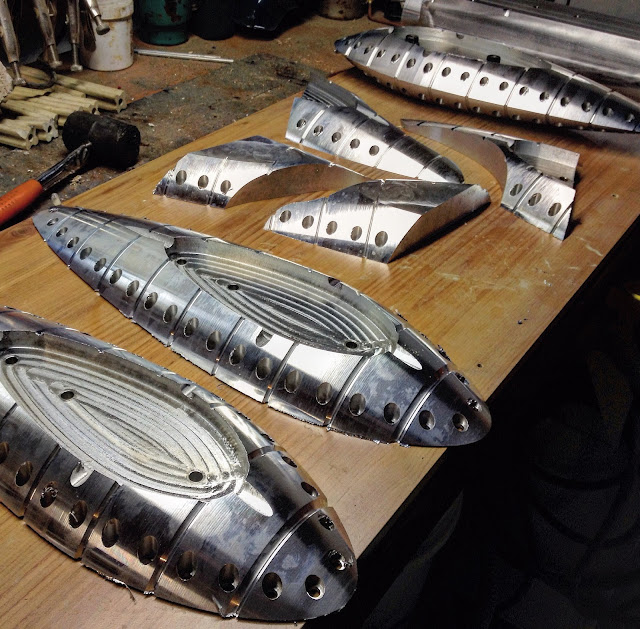 Back to work on the bigger projects

Now with all of my little projects complete, I am back to work on my larger sculptures that have been patiently waiting for my interest to return. I do plan to have them complete before the year is out, but in the mean time, here is a sneak peak at the parts pile that is forming on my bench.

I started this project with over 300 lbs of metal, I expect that weight to be cut to 1/3rd by the time all of the machining is complete. 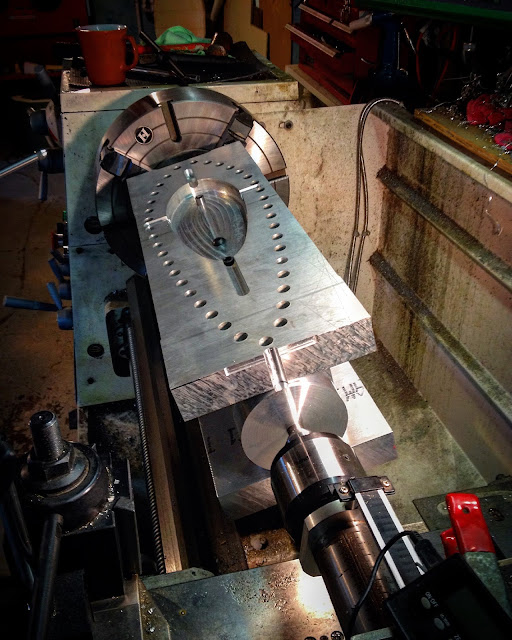 Another peak at one of the more unusual setups from this project. This was a bit intimidating for me, 150 lbs of whirling death is how I described it. The large plates you see were bolted to a 4" by 24" long square arbor for turning. when initially mounted on the lathe, they had less than .05" of clearance to swing over the cross slide on my rather large 16" lathe. Once turned down, they were a much more comfortable fit, and could then be moved over to the CNC lathe to make the parts you saw above.

I will have video and other process shots once the project is complete, so this is all for now. 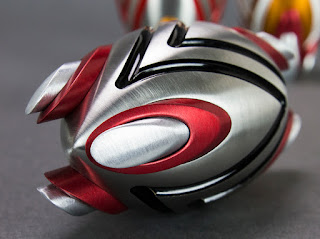