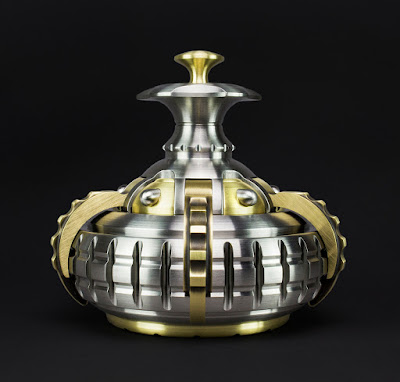 Over the last three years, I have been exploring the ways in which my medium (machine work) intersects with various design and craft traditions.

This work is the third in my series of mechanical vessels, all of which stem from a collection of sketches I made back in 2016. At that time, I began thinking more seriously about how utility plays a key role in various aesthetics within the industrial arts.

Since then a have become involved in a full blown inquiry of how various industrial processes find their way into artistic use, and it has blossomed into a separate thread within my sculpture practice.

This work builds directly on visual and design elements developed during both the NHVB and NV2 projects. A bit larger than both of those pieces, it functions much better as a container without sacrificing what made its predecessors mechanically and visually compelling.

The mechanical action of this work is one that (for better or worse) gives the impression of a claw or a simple grabber. Which is why despite the familiar nomenclature in its formal title ("SMV3") it has already garnered a second semi-official nickname as “The Snatch Vessel”

The origins of this work shed a light on how my own abilities as a sculptor continue to grow. Of the handful of concept sketches I made for mechanical vessels, the early draft of this work was one in which I was least confidant.

While it was an interesting concept, it was one I felt I might not actually be able to build. I knew what the mechanics needed to do, but how to implement them in a way that was elegant and did not interfere visually with the rest of the object seemed quite impossible at the time. Like so many ideas, I set it aside to let it mature. 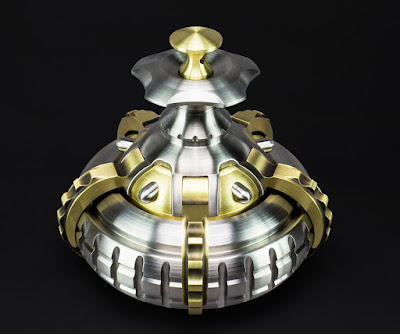 Experience and time have a way of bringing fresh solutions to old problems. Having now worked on quite a few kinetic art objects since 2016, I was now able to revisit this design and draw on a much larger pool of domain knowledge to finally realize this unique piece.

The mechanics for SMV3 may seem straightforward, but they are deceptively complicated. 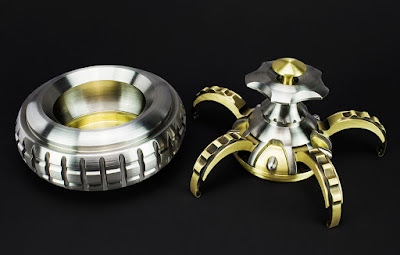 On first impression, it looks as though depressing the plunger on the top would simply rotate the locking arms out to the side and allow the lid to be lifted off. But in order for the arms to properly release, they need to be able to swing down under the gripping edge of the container. Also, for the container to have a firm lock, the arms need to be able to swing back down under, and then lift up against that same gripping edge and keep tension, engaging like a hook.

To do that, the pivot point of the five arms needs to be able to shift up and down at the appropriate time. 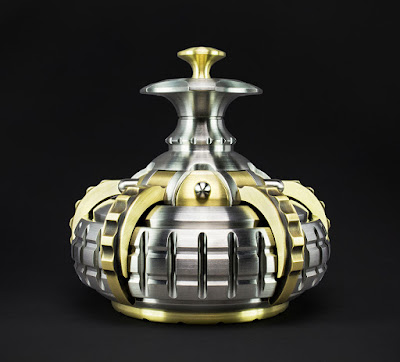 Three years ago, this was something I just couldn’t work out. My early attempts were too complex, required multiple steps to operate, and generally made it impossible to design an object that wasn’t a mechanical monstrosity.

But again, time and experience can sometimes bring clarity, and now the solution seems deceptively simple. 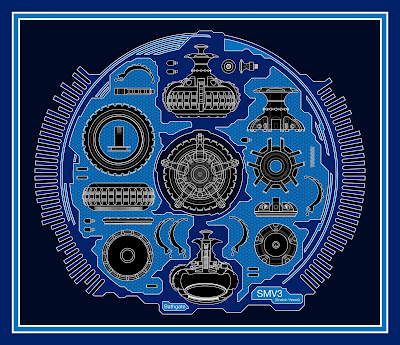 To achieve this, the lid was made in two parts, an upper and lower half. These halves can slide up and down independent of each other. The lower half of the lid serves three roles. It is what seats onto the lower vessel, sealing it shut. Its geometry also conceals the hinge pin openings on the upper half, preventing their removal. And lastly, it holds a spring that acts against the upper half of the lid, keeping it in tension. 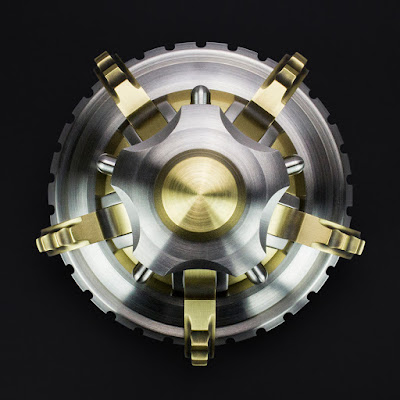 The top half of the lid houses the hinges for the plunger-actuated arms and floats on top of the spring in the lower half. When the plunger on the top is depressed to rotate the arms, it creates enough additional force to also compress the float spring. This allows the upper lid and hinges to drop just a fraction of an inch, allowing the hook-shaped ends of the arms to clear and swing free of the lower vessel so the lid can be removed.

This all works without any extra steps or motion on the part of the operator, and the same goes when replacing the lid while depressing the plunger.

Interestingly, this arrangement also prevents operating the lid (and dropping the vessel) while being held in mid air by the knob alone. The mechanism only works when there is a counter pressure on the bottom of the container, be it a table, your hand, or another resting surface.

It all works too well really. It is one of those “it is so simple no one will believe it was hard to design” situations. But I don’t care, the piece works great and it looks even better. It fits beautifully into the family of vessels I have made to date and I count it among one of my most elegant technical achievements. 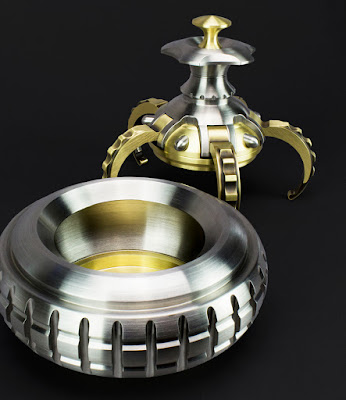 So as has become routine, I am eager to see what insights I can glean from developing and refining the process for making a small run of these works. So a limited edition seems in order.

Unlike the first two vessels, which were collaborations with my good friends over at RevolveMakers, I am going to bring this particular project back in-house and build them in my shop.

Because I will be building these alongside a couple of other projects I am developing, and because they are quite complex, this edition is going to be pretty limited. Probably around 10-15 works total.

Although I only have a prototype in brass and stainless steel at the moment, I will also offer a version in all Stainless steel. I am working on an example of that combination as we speak. But below is an approximation.

I will open a pre-order sign up on Tuesday of next week (July 2nd at 12 Noon EST).

For the die-hard collectors out there, I will take the first 10 people who get their names on the list.

From there I will make an additional 5 (or so) spots available to the rest of the people who add their names to the sign up, and assign them by doing a random number drawing once the list closes.

I expect the first ten slots to disappear almost immediately so you will have to be very quick if you want to get a guaranteed spot.

I will leave the sign up open all the way through Friday (July 5th). So anyone who feels lucky and wants to throw their name in the hat will have plenty of time to make an informed decision about whether to try and bring one of these beauties into their collection.

So look for a sign up link here (as well as IG and my newsletter) on Tuesday July 2nd, or sign up to my newsletter to have it emailed to you at the proper time.

As always, comments and questions are welcome, and good luck. 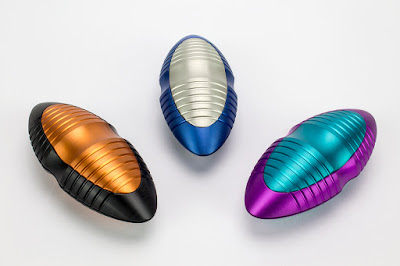 Everyone knows I love doing extra credit projects. Well, I wrapped on my MG-2 sculpture project much earlier than I expected, so I couldn't help experimenting with a thought that occurred to me during its production.

Originally, I was using ceramic bearings for both the MG-1 and the MG-2. These bearings are very hard, which is what makes them such good bearings. However, this is not good for some applications and I found that they were not friendly to some of the softer metals I was using. This led me to think there was no way I could use aluminum in conjunction with this mechanical arrangement.

But during development of MG-2, I also started experimenting with Delrin bearings, which are a hard plastic. Turns out, they are just hard enough to work as a bearing, but much softer then ceramic, and to my surprise, much gentler on the races of my MG pieces. 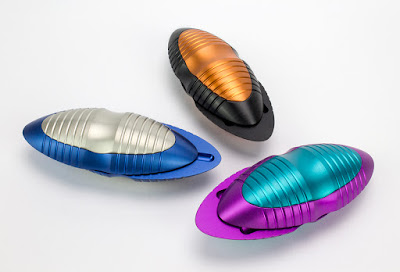 At some point during fabrication of MG-2, I realized that this might open the door to doing a completely anodized aluminum version of the piece, as the Delrin is soft enough not to damage an anodized bearing race, which is something the ceramic bearings would surely do. This would allow a much wider range of colors and all but eliminate the other weight issue I had with the MG-2.

Unfortunately the ship had sailed on MG-2 to try it, but I just couldn’t resist and so here we are with a prototype for what I am calling MG-3.

Functionally it is very close to MG-2 but with a new profile and as you might imagine, the color variations are limited only by the number of dye tanks I have. I like doing things in three’s anyway, so I am going to make this an official release and call it the last of the MG series. 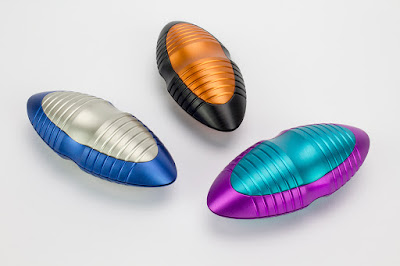 Sounds fancy right!
Basically, I want to limit the number of pieces I am going to make. Rather than a raffle or something like that, I want to try something new. I am going to severely limit the sign up window.  I will open a pre-order sign up similar to past sign ups, but the form will only be live for exactly ten minutes.  YEP…ONLY TEN MINUTES!


I will open the form at 12Noon EST this Thursday, June the 6th. I will close the form at 12:10 PM. No exceptions and only one work per person.


I am going to open up the color choice completely (something I never do) and allow you to choose any color combination you like, so long as it is a color that I already have set up. Here is the list.


Those are the colors I am working with currently, so you will be able to choose what ever you want for both the bodies and the inlays. I will work this out on the form.  Examples of each of these colors can be seen by looking through my catalogues of work on my website.
OK, that’s all for now. I will email the link to my mailing list at 12Noon on Thursday and post it to this blog and Instagram as well. I will close the form AFTER ONLY TEN MINUTES. This is only for the most dedicated collectors among you, so this should be fun.
Good luck.
Posted by Chris Bathgate at 9:09 AM