Hello again everyone. Today I have three colorful additions to my portfolio I'd like to share with all of you.

A bit of a long write up this time, I am allowing myself the luxury of a ramble as this is my space, but feel free to just look at the pictures if that is what you came for. 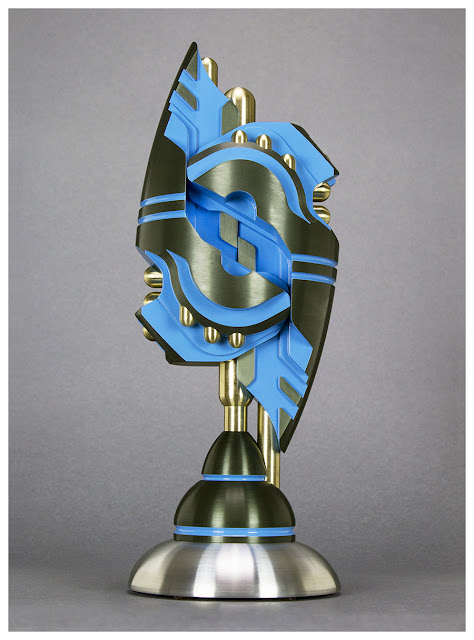 This tryptic has its origins in two distinct interests of mine.

On the technical side, I had been working for a while to design geometric elements that work in a modular way to create multiple compositions. After many attempts, I hit on something that seemed to have promise.

Aesthetically, I have been looking for influences from various machinist craft traditions. I have been researching an array of online groups and forums to see how others approach my medium to see if I could build on some of the common visual languages present in our shared work. 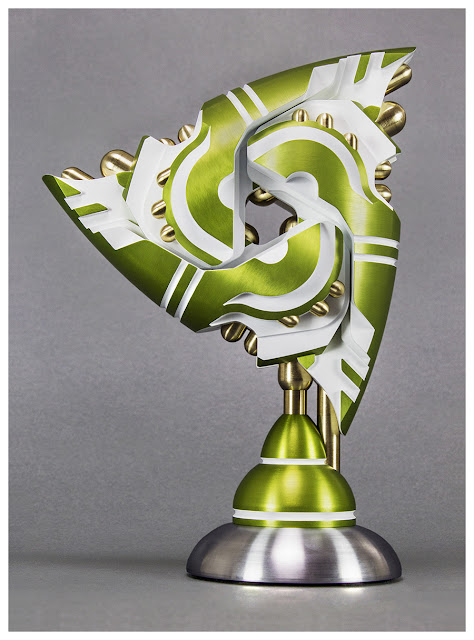 Engineering a single element that could be assembled in multiple ways has been something I have been chasing for several years. Although these compositions seem relatively straight forward, finding a geometric form that worked structurally without out negatively impacting the visual composition took a lot of careful planning. 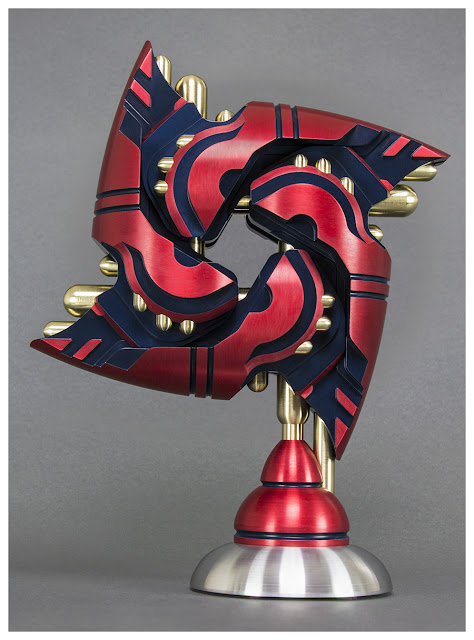 Coming up with a clamping system that would translate across the three works as well was also a challenge. 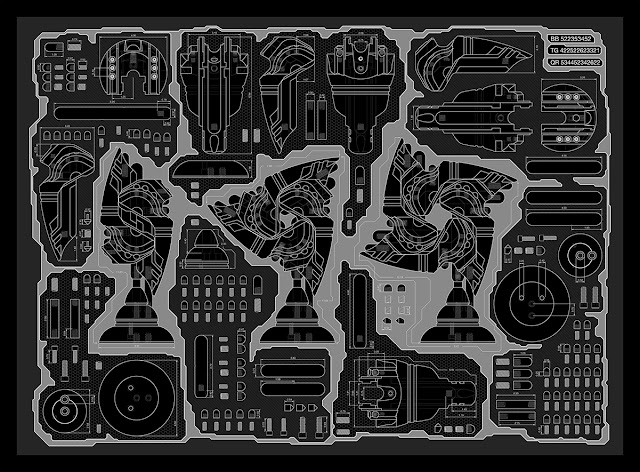 As I said, the main compositional element for this work is geometrically the same in all three works with the exception of the applied color pallet and the angle of the T slot that is cut through each of them. This slot is shifted for each work to accommodate the varying angles of intersection for the elements from sculpture to sculpture. 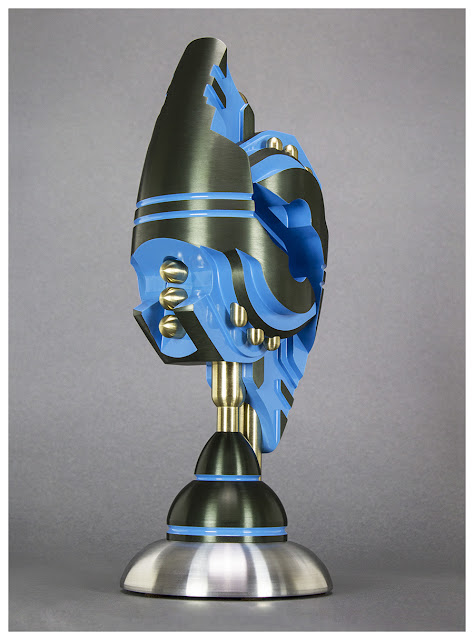 Aesthetically, I decided to try something just a little different.

I have been thinking a lot lately about how various vocations and craft traditions find their way into the arts. Being self-trained as a machinist, I have often looked for other sculptors who work like I do. Admittedly I have not found very many contemporaries. 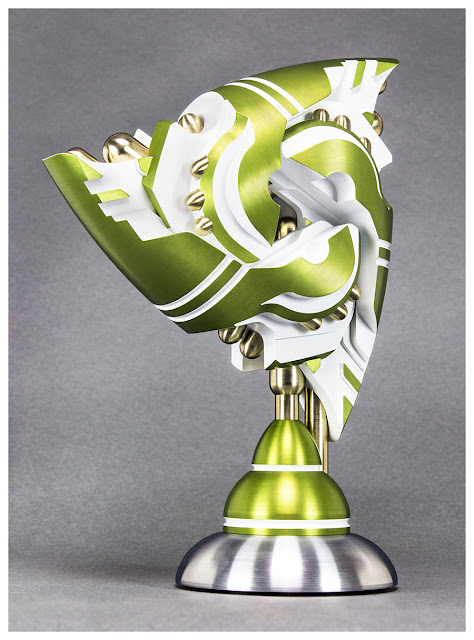 From an arts perspective, machining has been a bit of a holdout in terms of sculptors and artist putting machine tools to use in formalistic explorations like happened with the advent of other historical technologies such as ceramics, photography, glasswork and so forth. Some of this is likely due to equipment cost and the skills gap in getting started, but this probably is not the whole story. 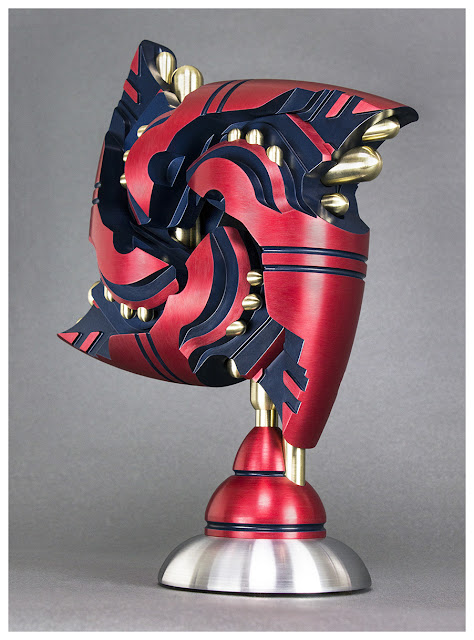 It is evident that it is not very economical to put together a machine shop full of production equipment simply to make “one of a kind” pieces of experimental art, but making work that may not be commercially viable has not stopped artist before. Machine work is over 100 years old, so then where are the other machinist sculptors? Where are the David Smith's of machine work?

I have found a few examples here and there, but In my quest for sculptural peers, I have mostly stumbled upon a multitude of machinist communities that each occupy their own little niche outside of the arts. They are groups who share my appreciation for the beauty in engineering and machining objects, but don’t necessarily express it in terms of the pursuit of sculpture.

I have found groups of artisan knife makers (see here), non precious metal ring makers (here), gun modification enthusiasts, Spinning top enthusiasts (see here), makers of tactical gear, key chains, bottle openers, and too many others to list. They each work on an array of utilitarian objects that function as their canvas and they diligently mix machine craft with aesthetics in a very considered way. These makers occupy a space between industrial commodities and what resembles more traditional fine art crafts. 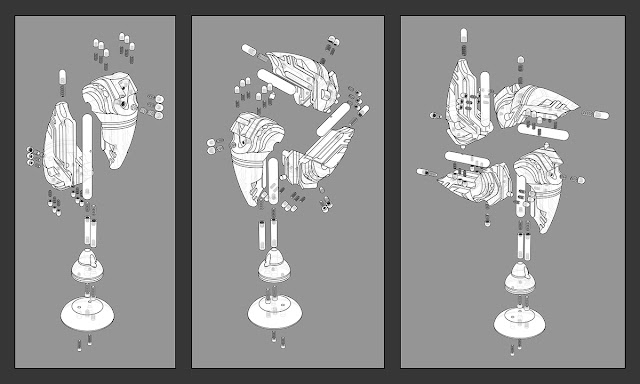 It is far more nuanced than I can do it justice, and the origins of many of the craftsmen I have found may be far more interesting than my own story, but it has been my observation that those who practice creative machine work themselves, tend to gravitate toward objects with known and viable markets or represent an augmentation of other long running traditions such as blade making. 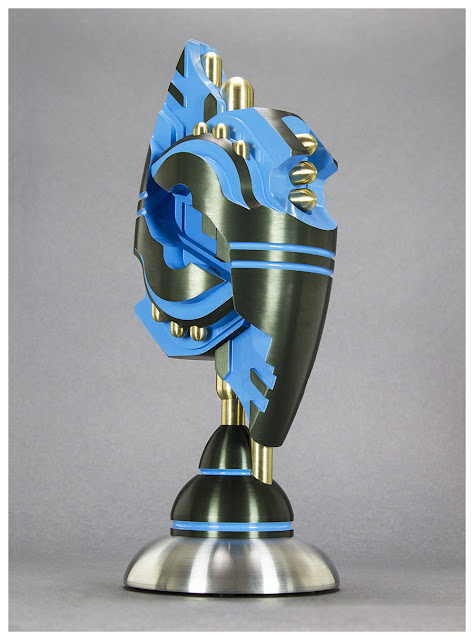 I could go on about any one of them all day, but the important part is that they are inspiring to me as an artist, and I wonder what, if anything is stopping some of them from pursuing sculpture as I have come to know it. Am I missing something fundamental about my relationship with my craft? Is utility inextricably tied up into doing this kind of work? I must admit I am not sure, but these are some of the themes I visit as I continue to dig into the aesthetics of what it means to be a machinist. 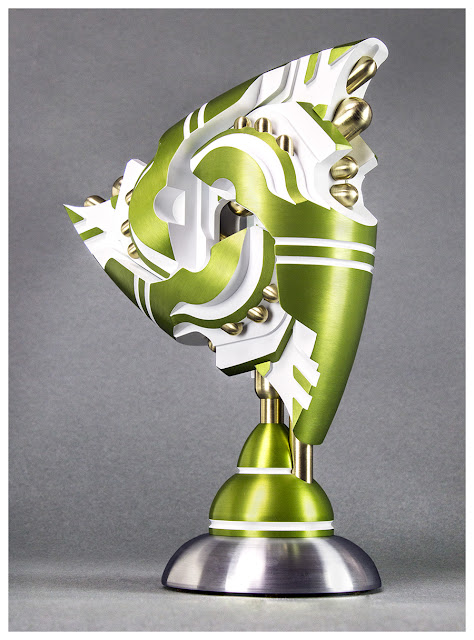 So while I am not particularly interested in joining or becoming a practitioner in any one of these wonderful communities, that does not mean there is not room for dialogue. I have a great appreciation for the work they do, and as a whole they represent a creative community with a visual language that I share. In some ways, it is the closest thing to a peer group that I have found, because while I still have much in common with more traditional sculptors, it can be difficult to talk nuts and bolts when what you do is so technically daunting to those who are unfamiliar. 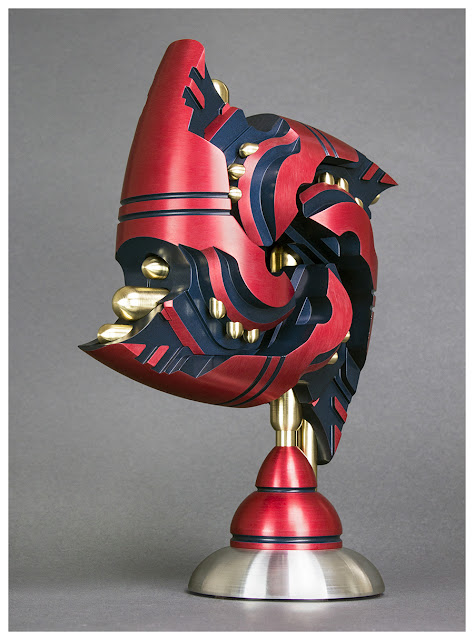 I also think that machining as a more recognizable fine art form is on the horizon. The Maker Movement has increased the visibility of digital fabrication technologies, and to me, these machinist groups look a lot like fine wood turning communities or ceramics communities. It is my hope that more of these machinists will turn toward making purely aesthetic sculptures and machined works in metal. 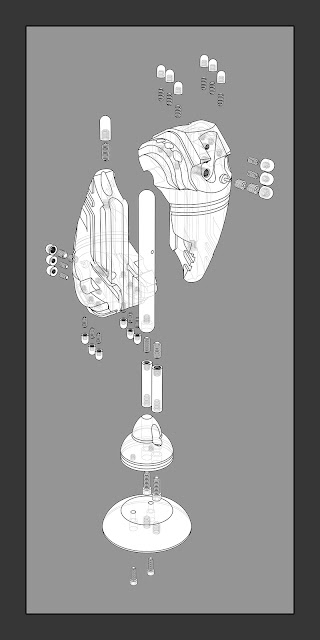 Since I personally don't draw much of a distinction between what is craft and what is art to begin with, I thought it interesting to try and start a visual dialogue with some of these other makers. I want to see if I can synthesize visual elements from other machinist who have turned there talents to making stylized, if not expressly artistic, objects of their own. 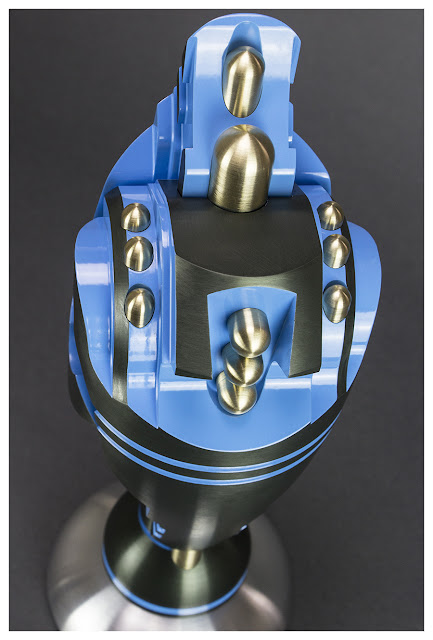 So, to say it in a short way, I have been captivated by some of these makers and have struck up correspondence with many of them to trade stories and talk shop. I have found that they are expressing a similar instinct to employ machine tools for an aesthetic purpose with sensitivity to what the tools do best, and are working to create a visual language around that within their area of expertise. 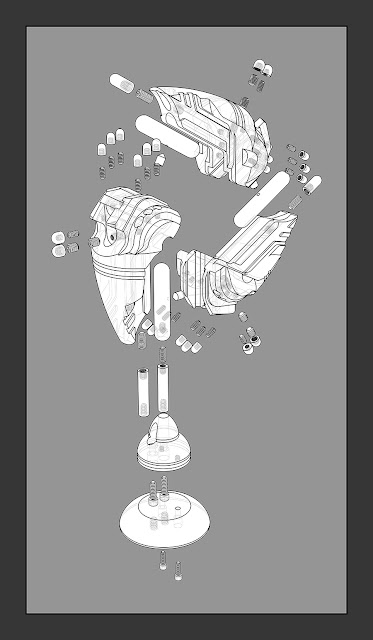 From those conversations and just looking at a range of work, I have attempted to design something that spoke to some of the line work, color and design queues I have been picking up from some of my fellow Makers. This triptych is the first installment in that visual conversation. 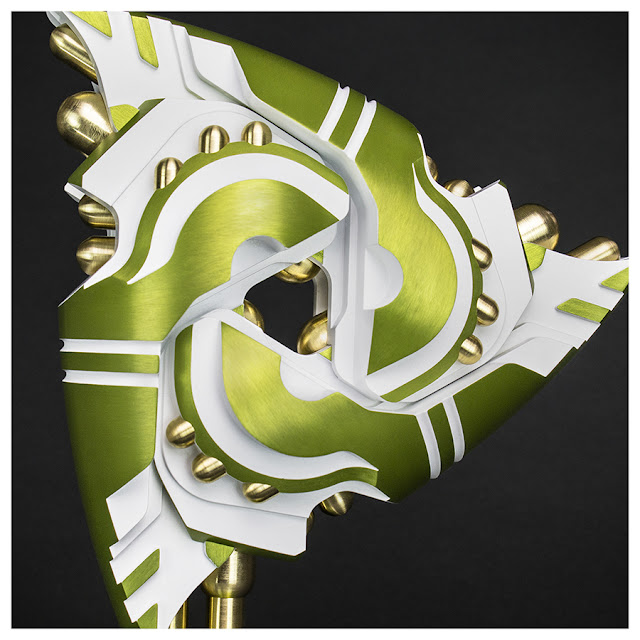 Build Notes: The green anodizing is a new addition to my shop, I found some of my fellow craftsmen go to much greater lengths than I do to apply patinas and other colorings to there work. Color seems to be an end in itself with some of them. 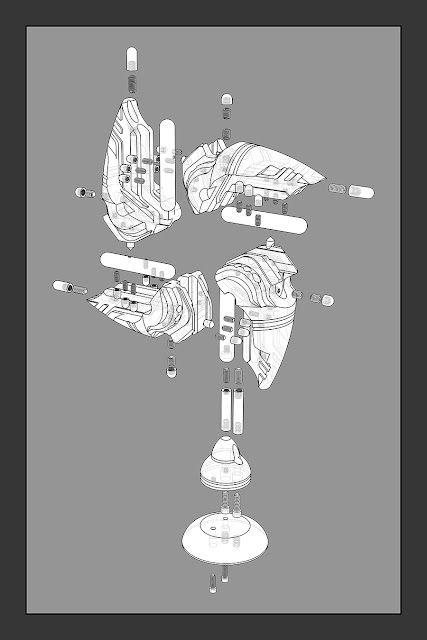 Each of the three work is just about 12 inches tall with a little variability between them. the base is 5" Diameter with varying widths from work to work. 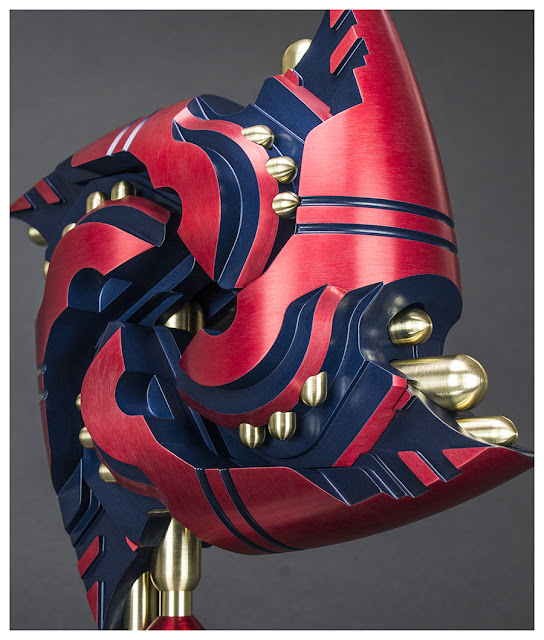 At first glance some might think this is black and red, but it is actually a deep, nearly black blue. 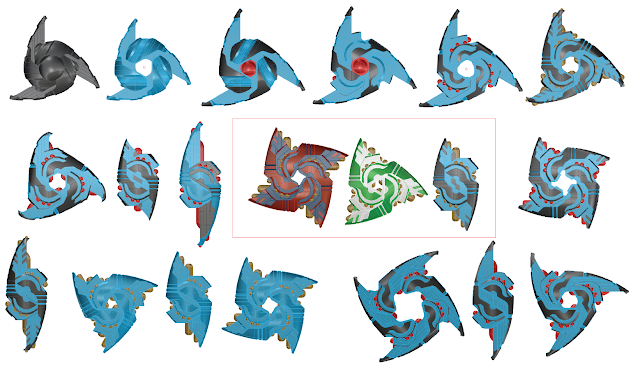 Thought I would include this image to illustrate the tedious iterative process that lead me to my final design. I counted and I have at least 35 different drawings of various versions of this work. This is a collection of some of them.

Lastly, some postcards from the build. I scrapped 3 parts along the way as well as made one extra as a spare to ensure I could successfully put together all three pieces with flawless parts. Anyway, it was quite a journey.

Posted by Chris Bathgate at 1:27 PM