It isn’t exactly mud and metal but let me explain: A collaboration with ceramicist Eric Moss 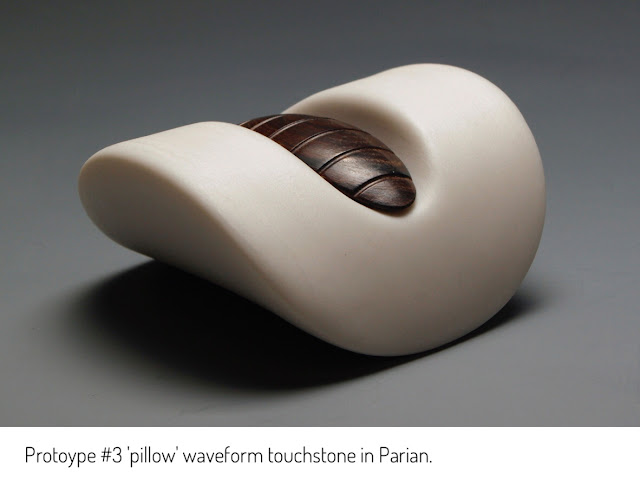 Today I wanted to share something that you might not know about me. I have been a metal sculptor for over two decades, but strangely enough, a very large proportion of the artists I follow happen to be people who primarily work in ceramics and clay (one of them, is Eric Moss). I can’t say why exactly, but while I live my creative life among metal, I am disproportionately drawn to pottery and ceramic sculpture.
Maybe it's because I found I am allergic to dusty environments that my path took me into metal instead of clay. Either way, despite my vocation of choice, I have developed a great appreciation for the muddy arts. Given that knowledge, one might assume that a mud and metal collaboration with another artist was inevitable, and you would be right...sort of 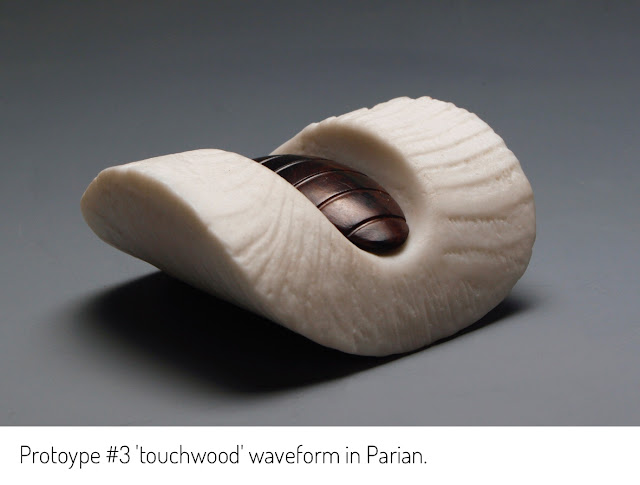 So while I would like to announce a collaboration between myself and fellow ceramic artist Eric Moss, the funny twist is that my contribution to this project will not actually be made of metal, it will be wood? Who would have thought?
I should really let Eric speak for himself as he is the one doing the heavy lifting for this project. Below are his thoughts on the project. 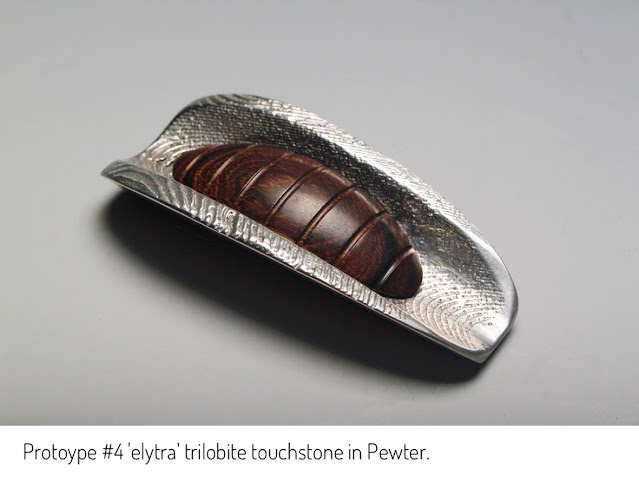 “I first encountered Chris’ extraordinary art in 2018 in the Instagram posts of one of his collectors, who also happened to be following my channel. He remarked on our similarity of appreciation in forms (and even then dreamed of a collaboration). The core of my practice then was raku firing ceramics, a low-tech, fast and brutal process with the end result left very much to the whim of the kiln gods rather than the artist – in my early years much of my output was lost to thermal shock breakages in the final moments after firing. Raku, I thought, might be too far removed from Chris’ precise, controlled and tight-tolerance work to consider a combined artwork?

Early in 2020, as Chris was preparing for release of his ‘worry stone’ meld of metal and wood, and in mutual appreciation of each other’s work, we agreed an artswap. Chris sent me a prototype worry stone in exchange for one of my two-part, wheel-thrown raku-fired ‘squid’. By 2020 I had already branched out into slipcasting my ‘waveform’ sculptures in porcelain tile form, driven by the need economically to make identical pieces for tessellating wall arrays. So, when Chris posted an image of a small collection of ‘overrun’ machined exotic wood ‘jewels’ from his project, and I mused how they might look presented in a ceramic mount, Chris sent a dozen over to me in the UK to “have a play”! 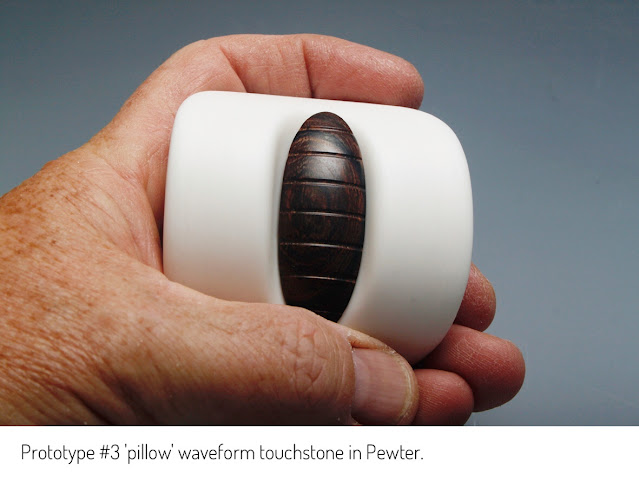 The initial impression of Chris’ worry stone was chrysalis-like with the grooved wood jewel appearing like the segmented underside of a beetle. So, I decided my ceramic mount might echo a beetle’s upper side ‘elytra’ (or wing cases). But, still occupied in ‘oloid’ and ‘waveform’ production, I first tried the jewels in both modified oloids and waveforms, each given a new recess to accommodate the jewel. These Prototypes #1, #2 and #3 had the feel of seeds with the jewel forming the germ part and Instagram posts of them were sparking interest and requests to acquire. Prototype #3 ‘waveforms’ in Parian have the added appeal of translucency as well as tactility.

My early experiments prompted Chris to offer to promote a possible collaborative edition, although he was still keen to see a prototype #4 of the ‘elytra’ that I’d first suggested. I set out to try to make these and to make the means to batch produce all four prototype themes should each/any garner enough interest for production? The modified oloids (Prototypes #1 & #2), with my primitive making methods, entailed so many hours of finessing that I elected to make them only for special commission. I am still investigating the technicalities of making the elytra in ceramic (developing a ‘slip injection process’ using plaster casts and kitchenalia) but present instead a divergence into pewter casting of the carved cuttlefish variant ‘elytra’ which I think works beautifully. I rediscovered cuttlefish casting in 2019 and was keen to incorporate it into my practice both in metal and ceramic. Lead-free Pewter is a pleasantly heavy (and easily cast) metal and it well defines the expressed laminae of carved cuttlefish in a sensuous, tactile form.“
E.M. 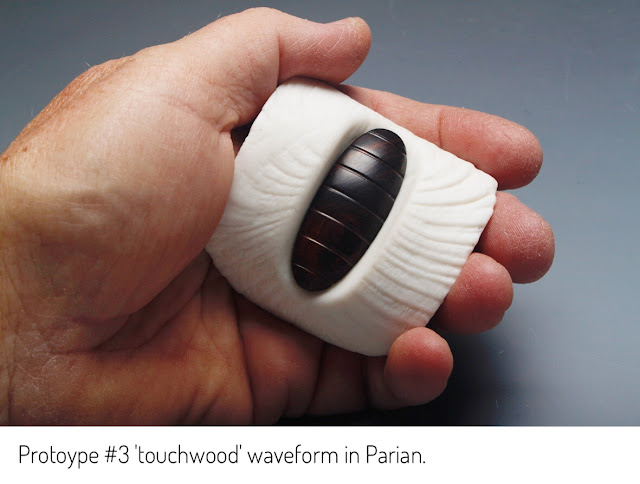 As you can read, Eric went in quite a few directions with this project, and really used it as an opportunity to explore and grow into a range of processes. I have enjoyed exchanging messages with him over the last couple months as developments unfolded.
The more I have learned about Eric's work, the more I see myself in it. His aesthetic instincts are quite complementary to my own, so it is fascinating to see my small wooden gems serve as a powerful catalyst for his work. To have something I designed and machined juxtaposed with such a diametrically different medium is an invaluable way to reflect on my own process and contrast the two. 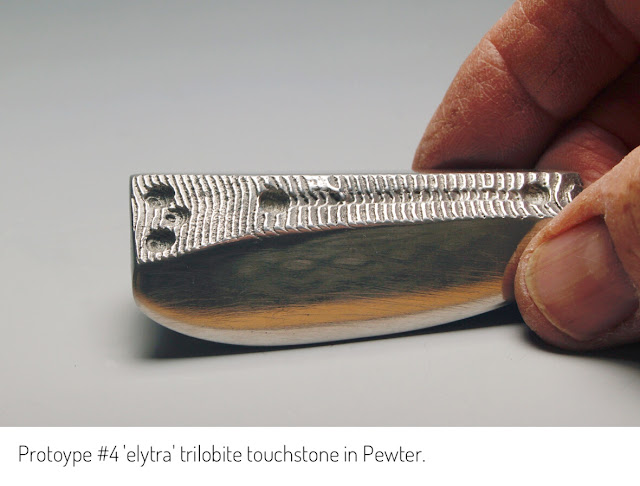 My craft is inherently precise, and Erics is much more squishy, but they have more in common than one might think. Ceramic work actually fits perfectly into one of the themes I talk about quite often here on this blog.
Ceramics is one of the oldest industrial processes, And while it has taken many forms throughout history in many cultures, its transition to a distinct contemporary fine art studio medium exhibits similarities with others crafts that share a utilitarian and decorative tradition. 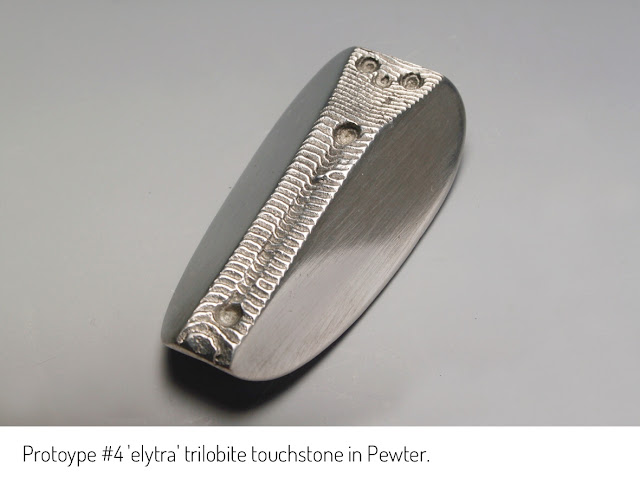 Like wood turning, glass making, and various kinds of metal work, it is a process whose primary function has (very slowly in this case) shifted from the utilitarian to artistic as technology has changed. While I am wholly unclear on the timeline, one might point to the transition away from manual ceramics production to industrial slip casting as the point where the modern studio ceramics movement was really able to take shape.
Again and again, when we see industry turn away from skilled labor and toward technology, those cast off skills often find a new niche within the fine arts. As a sculptor working with technology, that story has always captivated me and it is a great point of intersection between what I do, and what Eric does.
I think this project embodies all of that perfectly. 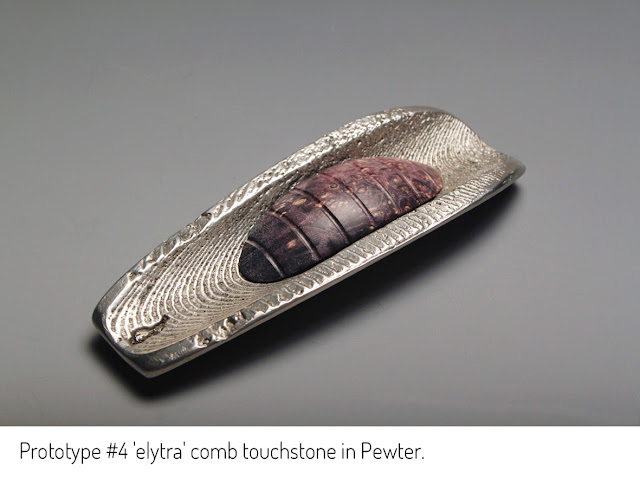 So the next question might be "Can I own one?"
Of course. As you might have guessed, we are going to offer up this project as an edition. I will be making a range of hardwood inserts for Eric, and he will be lovingly crafting a home for each of them.
If you are a collector of my work, or Erics, and are interested in adding one of these wonderful artifacts to your collection, simply click the link below and everything you need to know should be there.
Sign up form Link
Thank you. 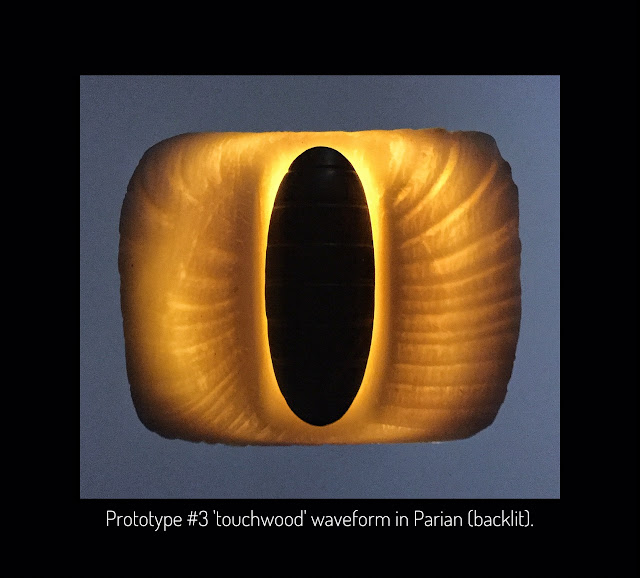 I hope you enjoy this project as much as I do, and as always, comments and questions are always welcome.
Posted by Chris Bathgate at 8:59 AM