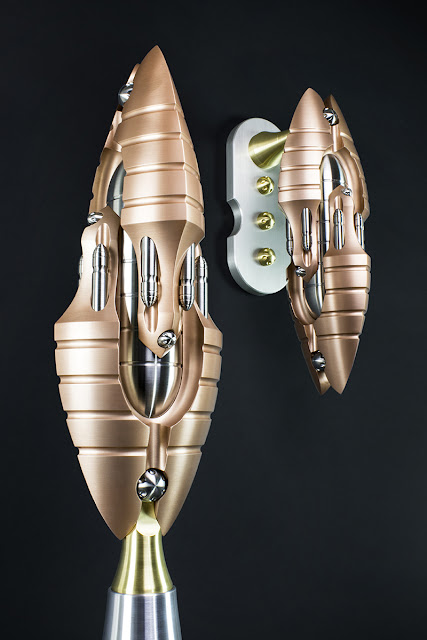 Having dedicated a lot of energy over the last year to making a series of small kinetic sculptures, I thought the time had come to turn some of the accumulated visual capital from those projects into a more substantial sculptural endeavor. So today’s post marks the culmination of many months of experimentation. 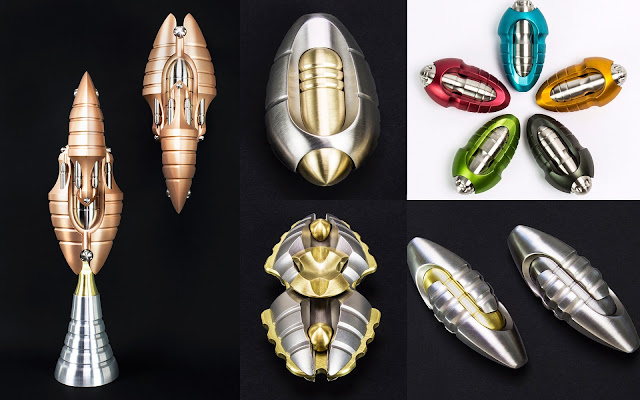 For those of you who are new to my work. this project is based off of a series of pocket sized Slider Sculptures, as well as my Artifact spinner collaboration (links for all of my design projects). These pieces were the creative framework for this design, and served as an excuse to attempt a rather ambitious technical challenge involving a method of turning metal usually reserved for much smaller parts. 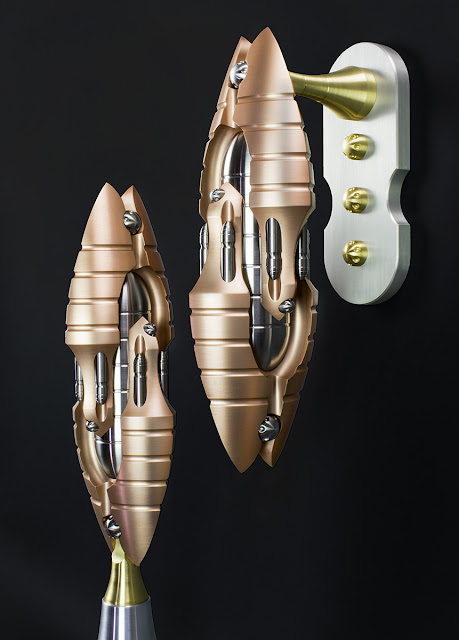 It was built around a turning process known as "offset turning" which is exactly what it sounds like; turning a piece of metal that is offset from the center axis of the machine. Think of how a jump rope swings around as apposed to a spinning top. 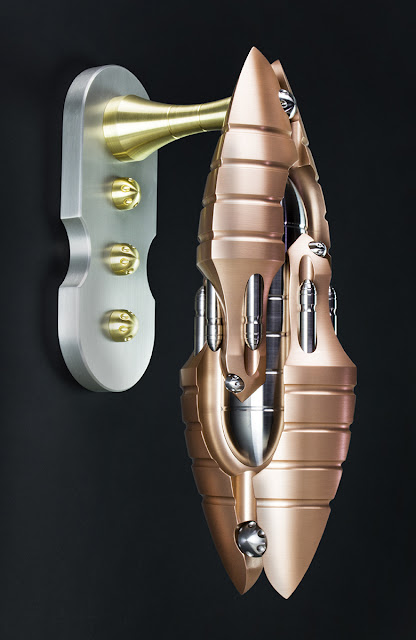 In metal, this process is usually reserved for smaller parts such as my slider sculptures, or with parts that are conducive to balancing and support like crank shafts. In smaller works, vibration is not much of an issue as the weight of the machine is more than sufficient to compensate for the wobble produced in the cut. With larger works however, you are swinging much heavier pieces in such a fashion that vibration must be accounted for, lest the machine shake itself apart or even fall over.

In order to attempt this process on larger work pieces, the entire assembly must be balanced in some way, usually by adding counter weights to the assembly, or in some cases, taking the cut so painfully slow that the wobble is mitigated.

To balance the weight in my case, I simply designed the parts so I could cut two of them at the same time. Having two parts diametrically apposed on the assembly, they would always counter balance each other throughout the entire cutting process, even after a significant amount of metal had been removed. 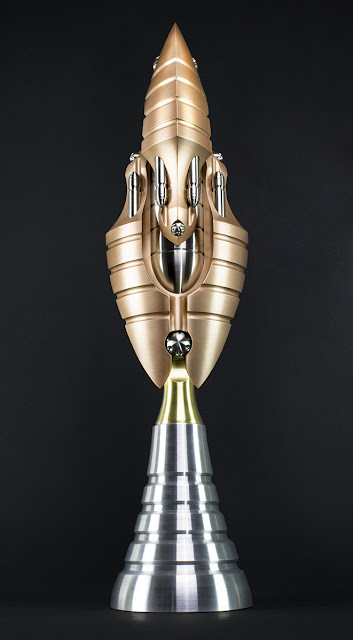 Some machinist would say there was likely an easier way to make these parts, and you are correct. Most modern machine shops would likely have attempted to realize these forms through a process that completely avoided the trouble of balancing the assembly. They likely would have used some form of 4 or 5 axis milling operation, essentially carving them using ball end mills on very advanced machines.

But where is the fun in that I ask?  I felt a milling approach was just too perfunctory a step, showing no relationship between the end result and the process used to achieve it. I liked the idea of using only 2 axis of motion and a clever set up over something much more advanced. The relationship between shape and process is how I get many of my ideas, so this felt like a way forward that might yield further inspiration.

Offset turning is also a process that would have been more commonly used for this purpose 30-50 years ago (probably much more), which is interesting in its own way. 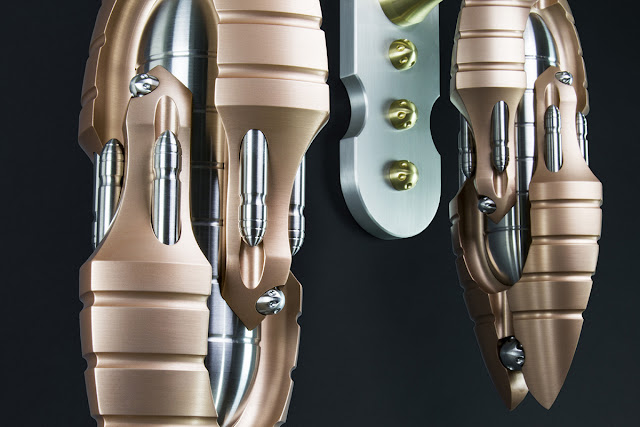 I had originally intended to only make one version of this sculpture, but a compositional split occurred at some point while finalizing my plan. The design seemed to suggest multiple ways of mounting the work (on the wall, or free standing) and rather than abandon one version over the other, I thought they worked far better as a set, complimenting one another in a way I had not anticipated. 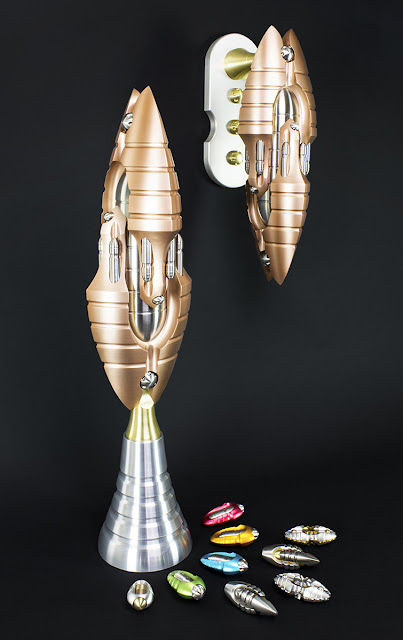 Above, you can see the difference in scale between the new works, and the many small projects that inspired them. The dimension are 23" tall for the freestanding work, and 16" tall for the wall mounted piece.

The copper colored anodizing was also something that I tested during my S1V2 series run. Materials are anodized aluminum, stainless steel, and brass. 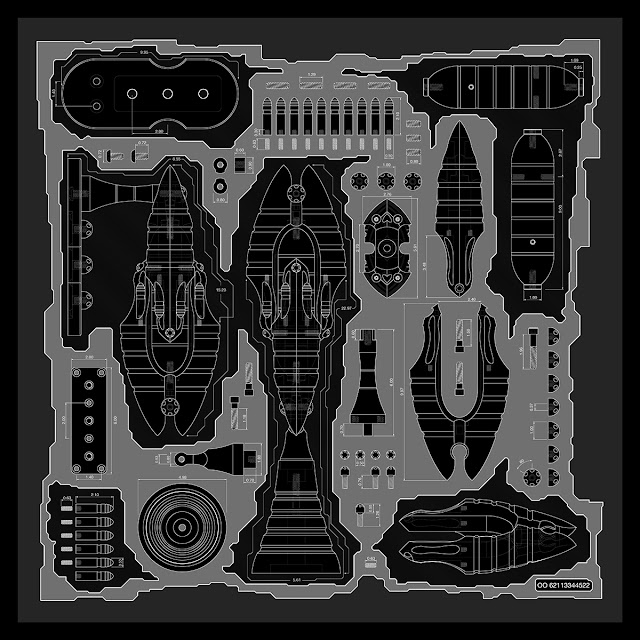 The technical drawing is 36"x36" square

Process notes: In order to attempt my offset turning operation,  there were dozens of preparatory milling, drilling and turning steps that had to occur to prepare the pieces. Additionally, I had to build a very special arbor to hold the works in the lathe at just the right offset and to support everything exactly where it needed to be. Above are some images from that long technical journey. It was a lot of fun to have everything building to a process moment that I had no idea if it would even be successful.

Above is the end result.