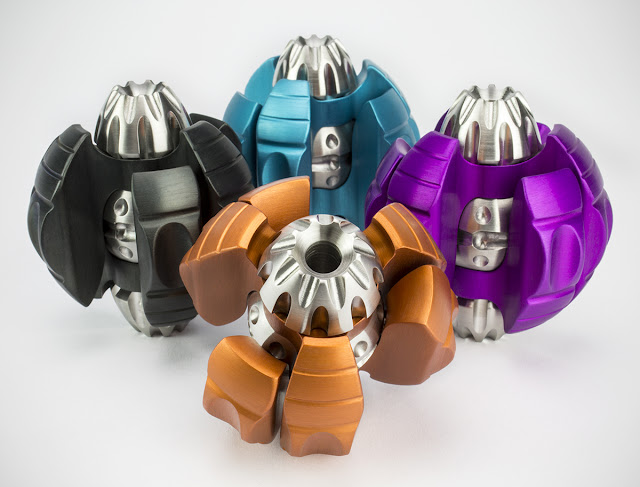 I have something really fun to unveil today. I'm calling this new kinetic work
"The Bathgate Ratchet"

This series is another entry in my growing line of mechanical experiments intended to bridge my sculpture practice with the utilitarian trends I am observing in the machinist community at large.

This one borrows from both my slider work, and my Netsuke project. It is a detent driven art piece that incorporates influences from the machined metal lanyard bead community as well.

This work uses a unique ratcheting mechanism. Basically the center sphere has a stepped bearing guide that only allows the ball bearings and springs that are nested inside to ride around the track in a single direction. This has the effect of revolving the inner geometry in steps when you sort of move the outer parts in a butterfly motion. It is similar to how a socket wrench works.

The design also has a hole running  through the length of the work to enable it to potentially be strung on a lanyard or worn however one might like. However, like the Netsuke project, this is a bit large for an actual bead so that design choice is there as both an homage and a challenge. 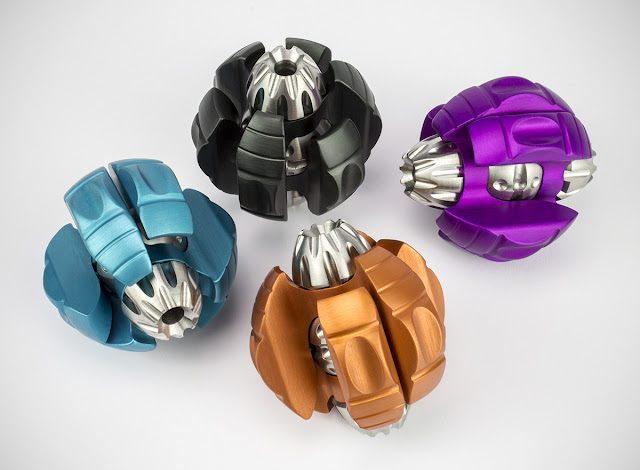 While the design of the sculpture took on many forms during its development, I was ultimately able to come up with something that required zero compromise as far as how I wanted the final artwork to look. Even if this work was non mechanical, I feel quite confident I would have designed a stand alone sculpture that looks just like this.

The sculpture functions perfectly as a static art object, while also performing its intentionally trivial, yet entertaining, function. 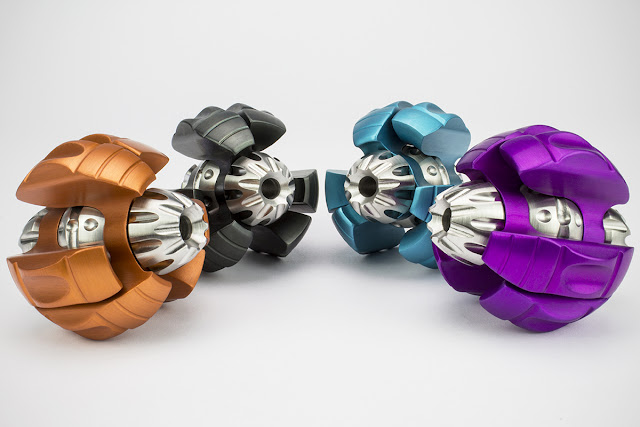 The mechanism was initially inspired when I handed a version of the S2 Slider to a friend of mine and they mistakenly twisted the work rather than sliding it open. Not what you are supposed to do with an S2, but I thought it was a great idea so I immediately got to work sketching something that could operate in a twisting fashion.  Eleven months later and here we are.

The mechanism worked surprisingly well on the very first prototype and makes a great clicking noise that is sure to delight (and annoy others) in equal amounts.

I have settled on four colors, Deep copper Orange, Charcoal Black, Deep Cyan Blue, and the very much requested as of late, purple violet. 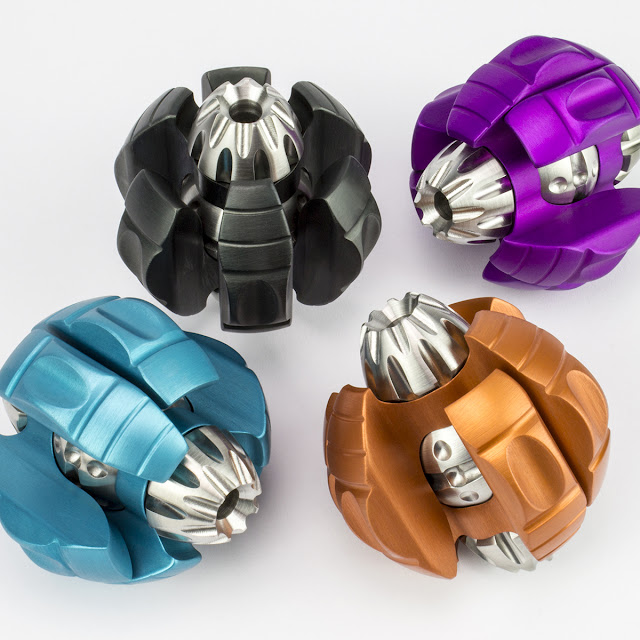 While I could have chosen any number of colors for the anodizing, I think a limited palette is preferable. These are the colors I feel work best for this geometry, so lets save some of the others for the future. 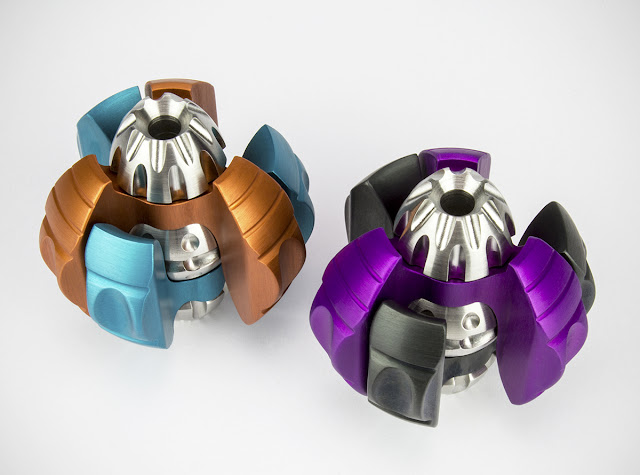 But just because I am limiting colors, it does not mean that I am not open to the idea of doing a two tone combo though!

So as with my other editions, a limited run of these works will be on offer. Because previous projects have been so popular, I am really going to push myself hard to make a larger quantity of these available (though it may kill me...just kidding I'll be fine).

Currently, I plan to make 99 of theses works. I am leaving the door open to add a few additional units if demand gets too out of hand (as frequently happens). So I am reserving the right to add extra units that I will distribute in as fare a way as possible if I see it fitting to do so.

I'd like to leave the sign-up open for a few days (instead of a few minutes) so everyone has a chance to add their name, so if the first 99 units sell out quickly, I will likely add just a few more that I will assign randomly to a some lucky people on the remaining wait list.

So lets set a date for the sign-up sale then..  if you are interested in adding one of these works to your collection....

The pre-order will open this coming Thursday (Nov 2nd) at 4PM (EST). I will send out the link via my email newsletter (mailchimp). I will also link it on my various social media, but the email will go out first for those of you trying to get in early.

The link will go to a google form where you can fill out your contact info and allow you to specify your preference for color. The form will also detail the pricing, shipping, and how payments will be processed. I do not post pricing on publicly facing media so you will have to wait until the link goes up to see the price. (Think more than an S2 and less than the NHVB for those who are familiar)

The first 99 people to sign up will be guaranteed one of the works. Everyone who signs up after the 99 limit is reached will go on to a waiting list.

Any additional units I decide to make, as well as any cancelations will be assigned to the remaining names on the list via random name drawing. I am limiting everyone to just one work as I want to get these into as many different hands as possible.

Do not sign up more than once or I may disqualify you.

If you are not on my mailing list, please sign up here before Thursday morning and white-list the following email address in your mail client to ensure you receive the email: "chris@chrisbathgate.com"

So again, keep an eye out for the Thursday pre-order email. And if you are reading this at some distant point in the future, I am sorry, but the moment has passed.

As always, comments and questions are welcome and thank you again for all of your enthusiastic support.

Posted by Chris Bathgate at 9:39 AM 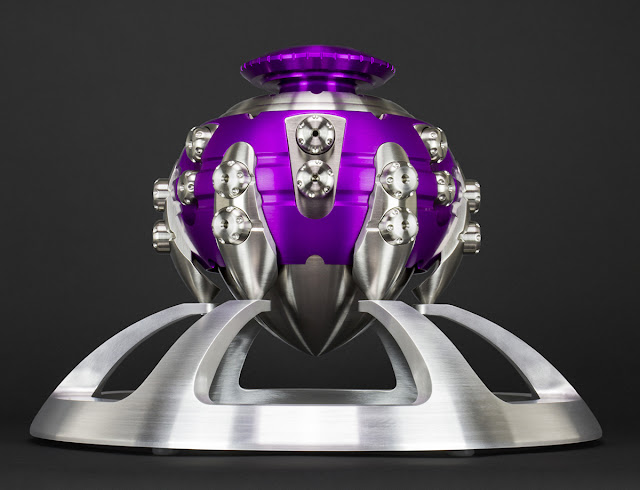 Hello again everyone. Today's post brings a project I have been tinkering with for a very long time, to fruition.

For those of you new to this space, this work is directly inspired by my NHVB pocket sculpture edition, which is a design collaboration I am making with the fine fellows from Nova labs and Revolvemakers (Otherwise known as Mike and Callye)

While my collaborators have been diligently working to put the final touches on the NHVB project, I have been developing this one of a kind piece in parallel.

The design takes most of its cues from its smaller counterpart, but it also more directly addresses the original inspiration for this whole project, a small Urn that I made well over a decade ago.

(the whole story is "Here" if you want to dig deeper)

My intention with previous kinetic editions has been to use the lessons learned developing them as a springboard for more ambitious sculptural works. Works that have, until now, eschewed the utility of the edition it was inspired by in favor of a kind of abstract formalism.

But in this case, I decided to embrace the vessel idea as a traditional craft form, and put my own modern machinist spin on it. I saw it as an opportunity to experiment within a decorative art context (something I have avoided in the past). 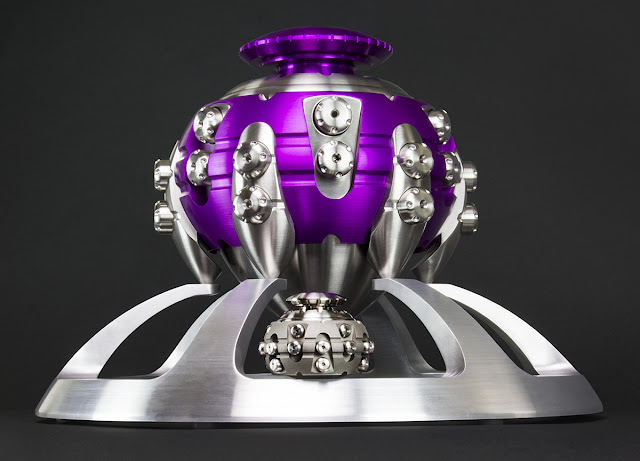 While still very sculptural, this mechanical object retains its utilitarian trappings in a wonderfully exaggerated and impractical way. In scaling the design for a larger object, I left a lot of the chunky-ness (for lack of a better term) of the original while making many refinements to the mechanics that would better suit its increased size.

You can see the size comparison (above) with the rather diminutive NHVB prototype. 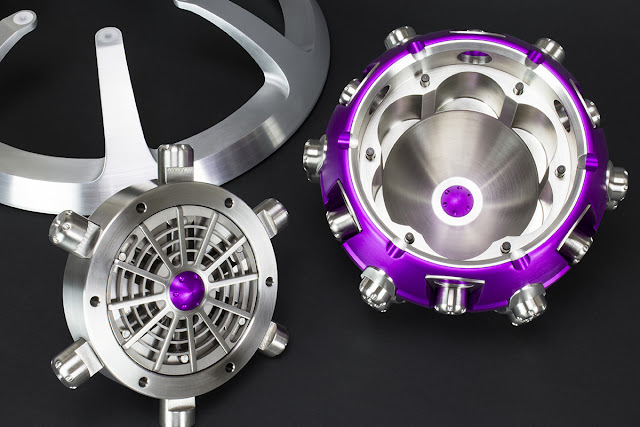 As far as vessels go, this work is quite thick. Rather than make side walls and other elements as thin as possible to create maximum interior volume, I intentionally left a lot of extra meat on the design to give it visual (and physical) weight. I wanted to retain certain qualities that engineered objects often have. Some of the qualities I am looking for come from inefficiencies with material removal in favor of manufacturing simplicity. It is not an easy thing to explain, but it has a certain look to it.

In scaling the work, I was also able to take many of the purely decorative elements in the original NHVB and put them to an actual mechanical use in the expanded design. What were merely decorative pins around the outside of the NHVB are now necessary fasteners to hold and locate various elements, such as the stainless inner liner and the feet.

The lid on this work still operates in a similar manner as its smaller companion. But rather than a 1/3 turn iris mechanism as on the NHVB, this work has a finer scroll that requires over two full turns to actuate the locking pins. The scroll mechanism runs on two roller style thrust-bearings which allows it to operate very smoothly.

It is a very satisfying sensation to open and close this thing, if not a little harrowing to remove and replace such a heavy lid without denting or scratching anything.

The use of the color purple is sort of new as well. There still exists a loose association with the color purple and royalty, and in this particular situation, it felt like an appropriate choice given the extravagant nature of the design. 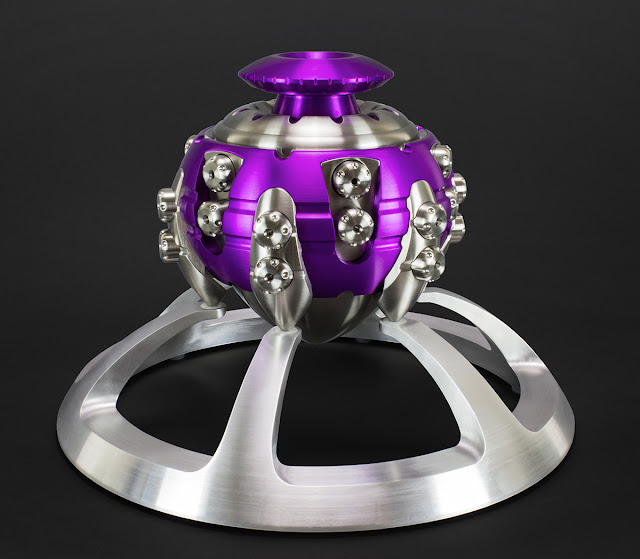 Having decided on purple, I was still unprepared for just how brilliant the purple anodized coating would turn out. Some have already commented how the photos just don't seem real, but I can assure you, this is exactly how it looks when you hit it with studio lights (I promise I did not touch the saturation setting when editing these photos).The color you see is "in camera" as they say.

The piece sits freely atop its base. The feet nest into divots on six small plastic inserts in the stand. I also made threaded plastic feet to protect any surfaces this rather heavy piece might rest upon. This gave me a rare opportunity to machine some Acetal rod, which is something I rarely get an opportunity do. 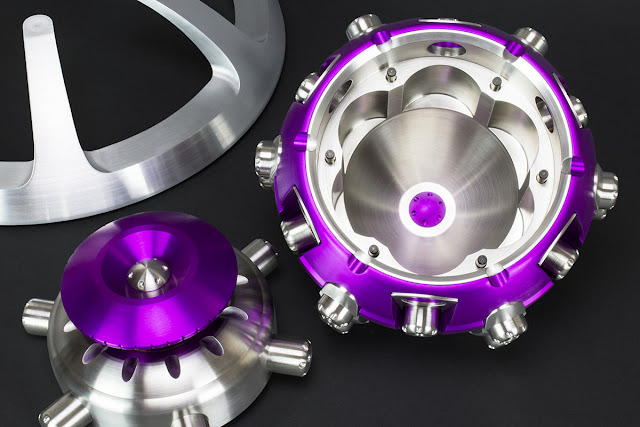 The internal volume of the vessel is just over one pint.  The base is 12" Diameter, while the vessel itself is approximately 7"D x 7" tall. 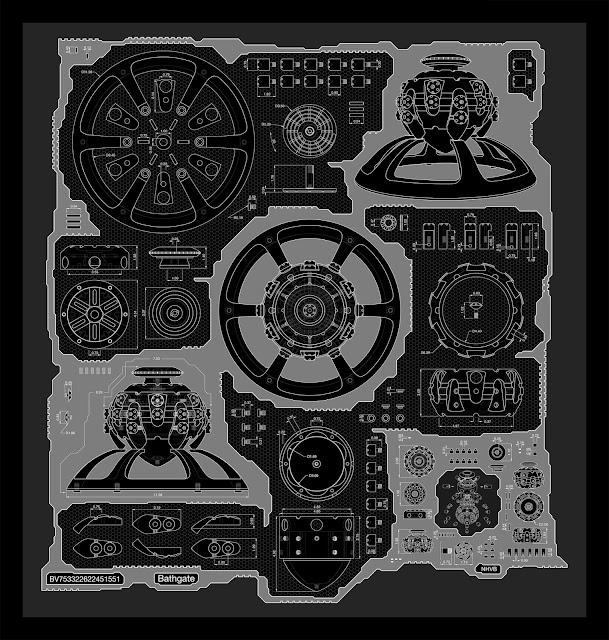 The technical print includes the NHVB technical details as well (lower right corner), How could I not include it when it is such an integral part of the project. 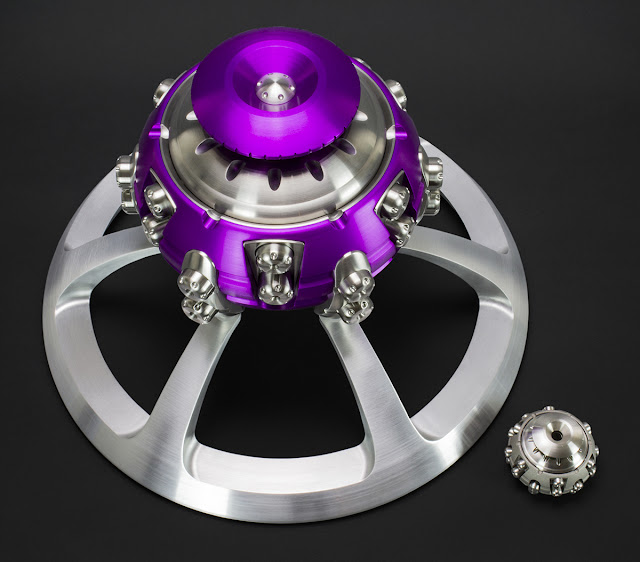 It was loads of fun developing these two projects in parallel, I feel like a vessel series may be in my near future. I still have a bunch of sketches from my original brainstorming session developing various mechanical urns, so there is a good chance I may bring one or two more of these off the drawing board over the next year or so.

While I continue to explore collaborations that expand my conception of my own sculpture work, as well as ideas surrounding craft and fine art, I am also finding a larger community of makers and craftspeople with whom to share a dialogue. It is very exciting to see my work so warmly received in so many different maker and artist communities. It is even more heartening to hear stories about how my work has influenced others to pursue their own art.

So I just want to thank you all for continuing to follow what I do, and for sharing your work  with me. I am doing my very best to keep this adventure interesting for everyone involved.

As always, thoughts and questions are welcome.