I have never been very good at saving the best for last, so it is fortuitous that these special Worry-Stones were an unplanned extension of my project, as they are indeed “the best” and also, the very last of them.

I have two different variations on my Woody project to share today (not to be confused with the larger works I am currently producing). Also, for those of you interested, there is also a chance here to maybe add one of these to your collection. 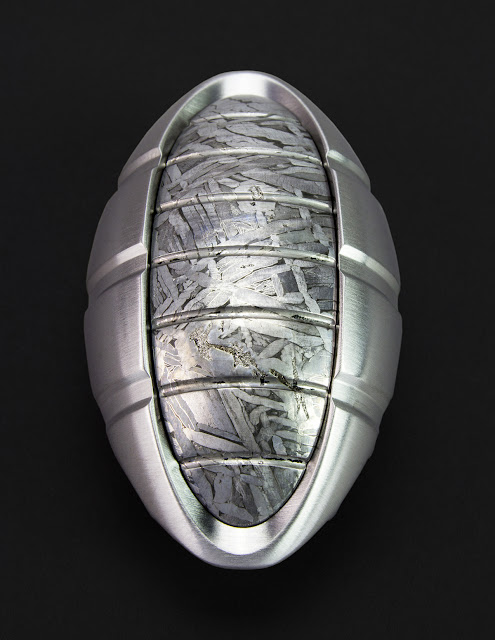 So let's start things off with the work that is by far the most unique of the bunch, the Meteorite Worry-Stone. The insert for this work is made out of a real piece of the Aletai-Armanty meteorite, which is an iron-nickel meteorite that, when etched, exhibits a fascinating crystalline structure that can be found nowhere else on earth. 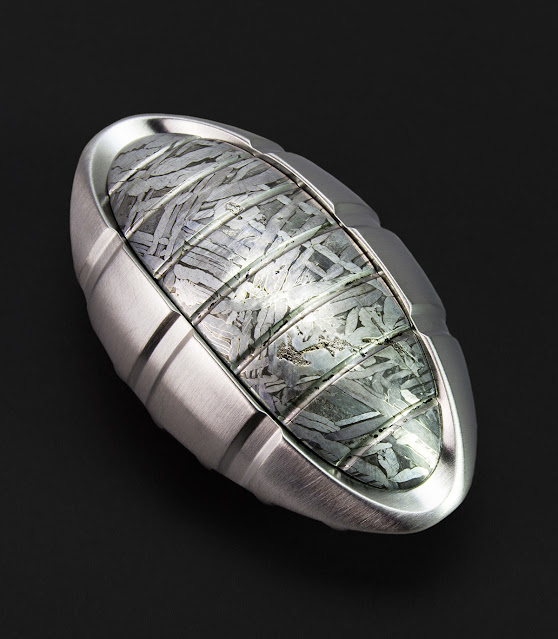 The original edition of Woody Worry-Stones were initially meant as a nod to some of the natural material combinations that knife makers most commonly utilize in their craft. I wanted to utilize those material trends for the purpose of sculpture. It was a fun concept that led to a very interesting edition of works and I learned a lot about a range of different hardwoods. But as it turns out, knife makers use such a wide spectrum of materials that by concentrating only on wood elements, I am barely even scratching the surface.

So to round out the project and further emphasize my thesis, I decided a non-wood material that represents a more extreme example of the materials knife makers utilize was in order.

One of the requirements I set out at the beginning of this project was that the inserts be made of only natural materials, among the more exotic examples that fit that requirement were fossilized mammoth tusk and saber tooth, also slightly more common is Ancient Bog Oak (which is semi petrified wood). But the material that really stuck out was meteorites, and for more than just the sheer novelty of it. 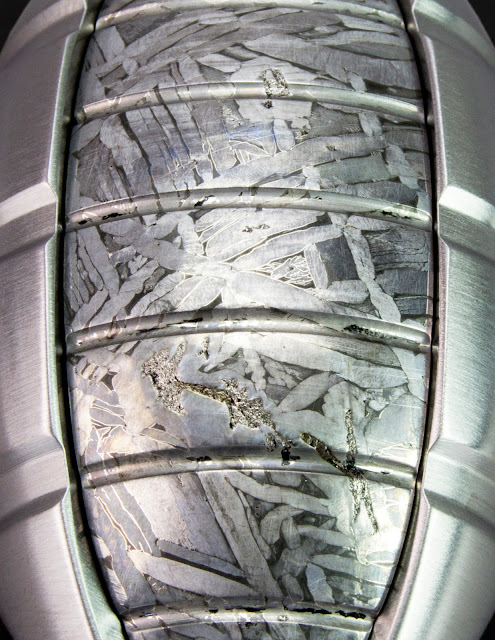 Metal Meteorite is very distinct because it has what is called Widmanstatten pattern . For those unfamiliar, it is a pattern that is formed when alloys within the meteorite cool very slowly over millions of years. This incredibly slow cooling allows crystals of various elements within the meteorite to form over an extended period of time and grow very (very) large. Only rocks of extraterrestrial origin have this pattern and it is not possible to create them artificially. These crystal patterns can be revealed using an etching process, and are quite striking. While this pattern's existence has only been known for two centuries, there are other reasons that meteorites have been a prized material (among knife makers especially) for millennia.
Before humans had the technology to smelt iron ore into usable alloys, they were already making steel objects by finding the stuff lying around on the surface of the earth as rocks. Those rocks were almost certainly meteorites, as it was the only source of refined iron on the planet. Skilled bronze age artisans were some of the first to find ways to craft knives and many other objects with this strange and very strong material. Iron meteorite artifacts can be found as far back as the 14th century BC, most famously, a dagger found in the tomb of King Tutankhamun. 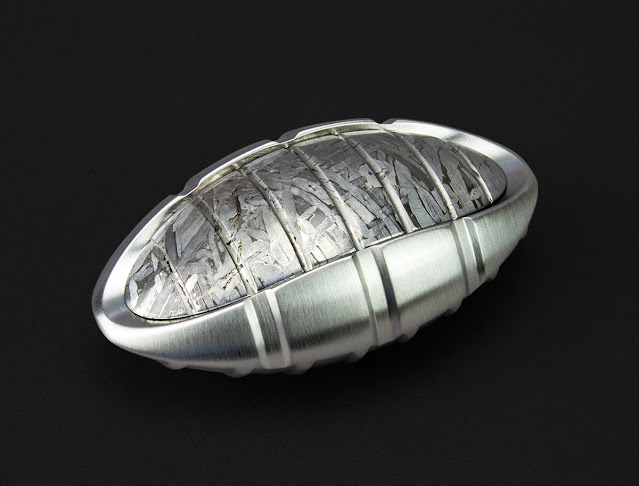 So yes, as a sculptural experiment that pivots around traditional knife making materials, this work certainly fits the bill. But step back a little further, and I think this work also embodies the bigger story I have been trying to tell about material progress and the ways that technologies always seem to trickle down into the arts.

I have spent my entire career making art that demonstrates how industrial processes (ones that are not traditionally thought of as art mediums) can be a primary source of inspiration for the making of fine sculpture. How if we look back far enough, many of the tools and technologies we readily accept as artistic mediums actually got their start on the factory floor rather than in the art studio. And that it is only when we are able to scale these technologies for individual use that they become more accessible to artist. 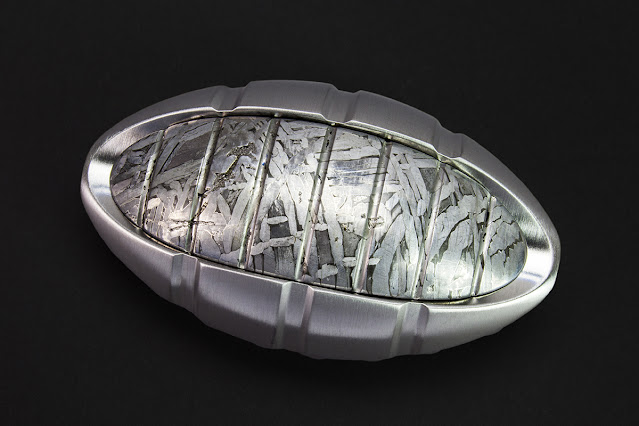 That smelting iron is such a large and unwieldy process, it would almost guarantee that it's early use would not be put to artistic ends. That skilled craftsmen were finding the stuff lying around as meteorites and shaping it into ceremonial art objects long before they could even produce the material themselves is a fascinating chapter in the history of mans material progress. Finding a way to bring that story into my own work was a welcome adventure. 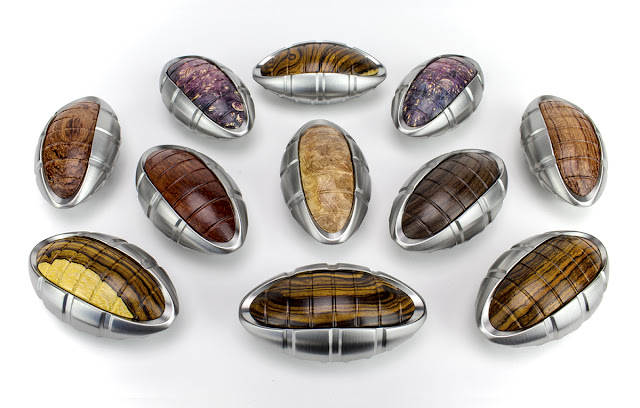 Ok, with the meteorite out of the way, I also wanted to show off these very special Woody Worry-stones, which incorporate the use of a lot of different hardwoods not offered in the initial run.
The list of used materials includes Bacote, Box Elder Burl (dyed purple), Bubinga, Red Malle, Bloodwood, Rosewood, and of course, a couple of very choice pieces of Desert Iron Wood. 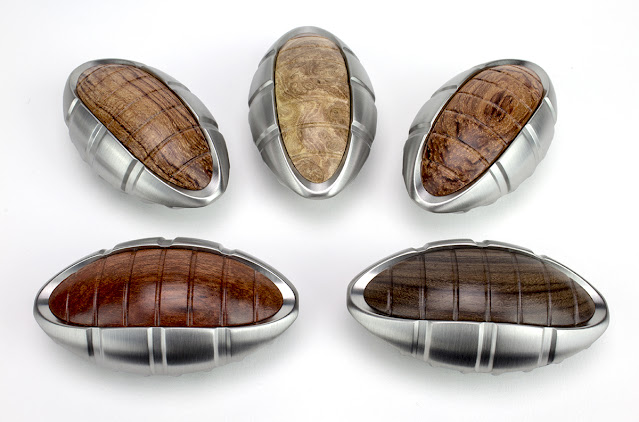 These were made in response to the wonderful outpouring of support I received following the release of the original Woody edition. There was an unprecedented gifting of exotic hardwoods that I just had not expected. It was exciting to get random, unsolicited packages containing blocks of material in the mail. Some came from complete strangers who just wanted to share their enthusiasm (and wood) for the project. Because of this, I just had to make a few extra pieces to show off some of my favorite hand picked pieces from my experiments with those special pieces of gifted wood. 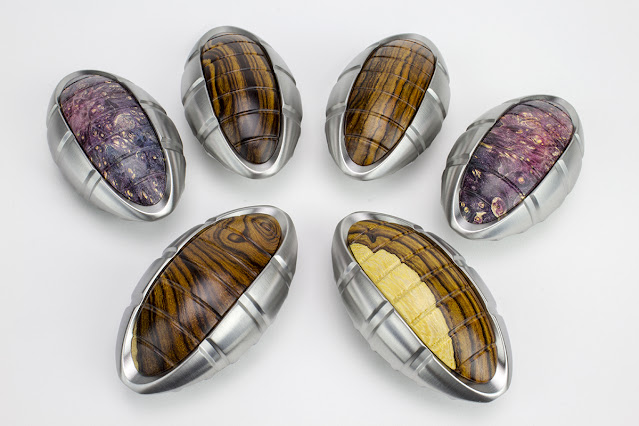 Thank you all again for following along, and the many kind and constructive conversations along the way.

Posted by Chris Bathgate at 8:41 AM