One "Thing" Always Leads To Another "Thing" 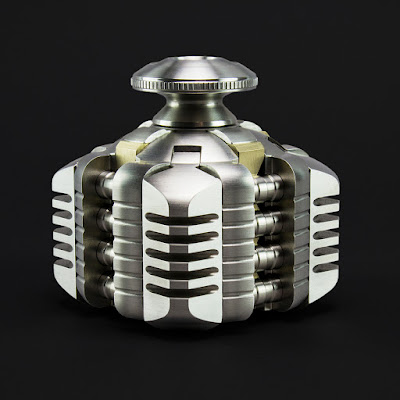 Today, I am pleased to reveal the second installment in what is becoming a "machined vessel" series.

This design project is yet another collaboration with my friends at Revolvemakers, and has been in the works since the release of our original NHVB Vessel. The idea for this series was spawned by my ongoing interest in how other industrial processes have transitioned from the factory floor into various niche and fine art traditions.

As many of you know, I have been thinking a lot about traditional forms within the various studio craft movements. Practices such as glasswork, woodwork, ceramics and stone are interesting to me because I see connections with their history and the journey I am currently on with machining. Essentially, any craft that got its start as a utilitarian industry, was at some point used to make pots, bowels, and cups. So within each craft, there are long standing traditions of making specific objects, and vessel forms dominate nearly all of them.

Strangely enough, this is something that (for now) seems to make machine work as a craft, just a little bit different.

As the name implies, machining is born of machines for the purpose of making (other) machines. As a craft, it has its roots in steam engines, automobiles, and airplanes, not to mention myriad weapons of war. It is a sprawling discipline that encompasses a wide range of processes and specialties. It is the medium of the industrial revolution, which itself spawned many art movements, but sadly machining, as a creative medium, was largely overlooked.

Because it is such a holistic practice, machining lacks a universal body of shapes and projects that its practitioners would use to learn the ropes. There are some basics, but where the majority of wood turners may make bowls and turned boxes to learn the trade, machinists tend to specialize within the wider medium, and make only what their particular pursuit demands. In this way it is both a broad and narrow medium. 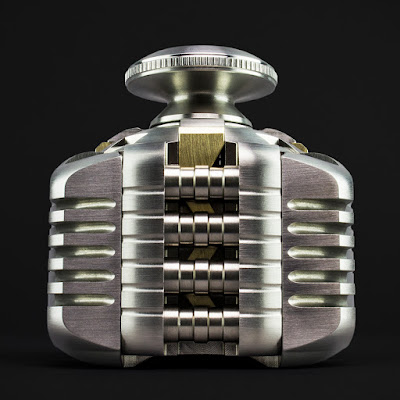 This should come as no surprise to those familiar, as machining was and remains the driver of every conceivable innovation for the last two and a half centuries. At its best, it has put humans on the moon and robots on mars.

So while it may seem counter intuitive to use a technologically complex process to revisit old forms from industrial crafts of yore, it is important to remember that each craft, no matter how old, was cutting edge technology at some point in time. The impulse to formally explore technologies is often very similar regardless of its vintage.

You can see how this dynamic of blending old and new technology has played out in the knife making community.

What started out as a Blacksmith's domain, has now been utterly dominated by the world of machining. It is a perfect example of an artisanal craft being augmented and improved upon by new technology in lots of interesting ways. It has spawned many new niches within the knife making and machining community, as well as insured there is enough interest in knife making as a whole to preserve first hand knowledge of some of the more historical aspects of the craft.

An act of appropriation, is quite often, also an act of preservation.

I think this vessel project is another great way to demonstrate what is similar across disciplines, as well as what is so distinctive about my particular medium of choice.

Subtext now firmly out of the way, to the specifics of this piece. While my first project (The NHVB) was sort of a multi layered journey into urns, beads, snuff bottles, and Japanese Netsuke/Sagemono, this new work is a bit of a broader stroke as far as the specifics of it being a vessel.

Derived from the same series of small mechanical urns as NHVB, my starting point was to design a sort of snuffbox. But this time I tried not to muddy the water with too many ideas as I wanted to give this thing room to grow organically and just generally work exceedingly well. I wanted a great mechanical piece that could speak to both sides of the sculpture/craft coin that is a growing theme in all of my work. 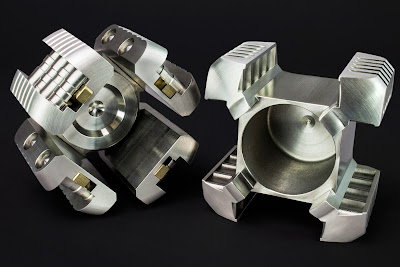 This work is good deal larger than NHVB, which makes it a more versatile container. However, the mechanics of the object are quite intricate, if maybe a little less showy than its predecessor. This makes the build a much more intensive undertaking. 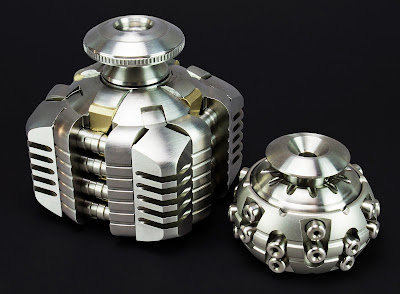 It takes good deal of force to move that many spring loaded pins, so while the action is sort of a slow moving screw action, it is an elegant mechanism and provides a robust locking action. It really is a visually and mechanically fascinating piece.

We have also worked in an optional O ring seal for a perfect air tight fit. This makes the lid extra snug (which is why it is optional), but it is, after all, a Snuff Box. 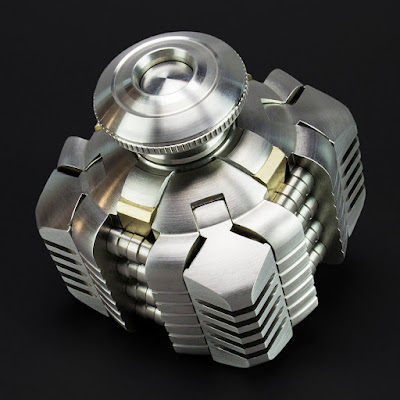 How can I get one?

This work, like the NHVB, is being produced in a limited edition as part of my ongoing collaboration with my friends at Revolvemakers in Virginia.

Unlike previous projects however, a fair number of these works are already nearly complete and will be ready to ship within a week or so! We did this because we had a number of unexpected delays on last years projects. This time, in order to account for any unforeseen bumps in the road, we decided to be extra careful and make sure everything was perfect and ready to go before even announcing these works.

All of the parts for the first few dozen of these are already machined and are being polished and assembled as we speak.

We will be posting a sign up sale on Tuesday (February 5th) of next week to place the first two dozen of these. I will post details as soon as they are finalized.

Until then please enjoy the pictures, and comments and questions are always welcome.

Posted by Chris Bathgate at 3:41 PM