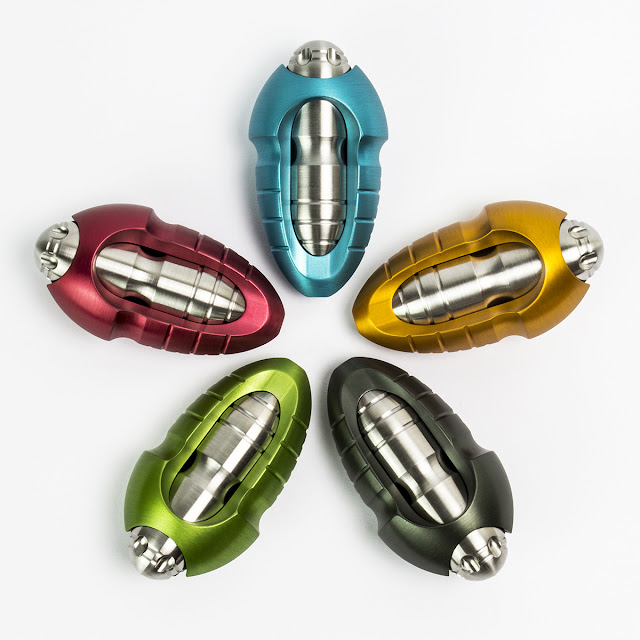 And now for some color.

As promised, a return to some smaller work with a new edition of "Slider" style pocket sculptures. Although similar in composition to the original S1, this is a complete redesign with a lot of carefully considered changes. I am going to call this the "S1V2".

I was originally going to go with S3 for simplicity, but I have a concept that is still incubating that reflects a more proper evolution, and so is more deserving of that moniker. I will get to it one day I promise.

There are a number of reasons I wanted to return to this form from last fall. For starters, over the many weeks I worked on S1, I kept coming up with small but meaningful changes I would have liked to try. Eventually, this list of changes became long enough that I started drafting some of them just to see how they would have looked.

These sketches became a complete redesign of the work. But having too many commitments at the time, I shelved the drawings, not knowing if I would ever get back to them. 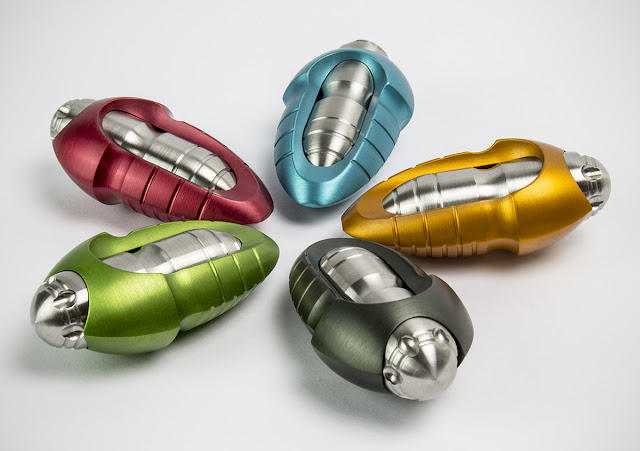 Another reason I decided to pull the trigger on this edition was that even though I have released a number of other small works in the last few months, I still get near daily emails from people who are primarily interested in my original slider design.

This is of course, very flattering, and as focused as I might be on "new" new work, eventually the steady drum beat of people wanting works of this nature must have had an effect. Not usually one to cave to peer pressure, I suspect I was already looking for an excuse to dust off my V2 design and see where it might lead. Given how great they turned out, and how excited I am to start this project has helped to confirm that suspicion.

Besides. I think I was able to cover enough new ground with this refinement to justify the indulgence. 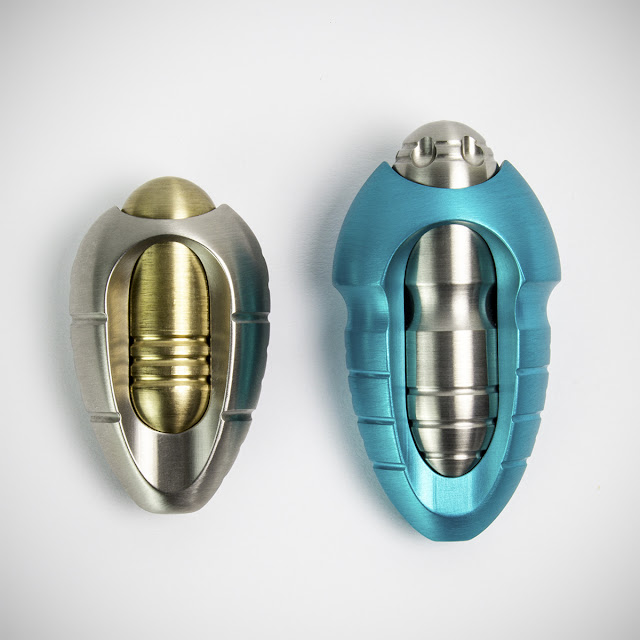 Aside form the new profiles and insert details, there are quite a few noteworthy changes in this new design. For starters, these are about 30% bigger than my original slider (but not heavier), I always thought that the originals might be a bit small for some hands so I went for something a little meatier.

This larger size was just enough to allow me to do some internal profiling on the bore that receives the insert. The radius on the tail end of the insert is an elongated profile, which requires a very small boring bar to turn the inside dimensions. The original S1 was simply drilled out using a 5/8" ball mill, which was limiting. 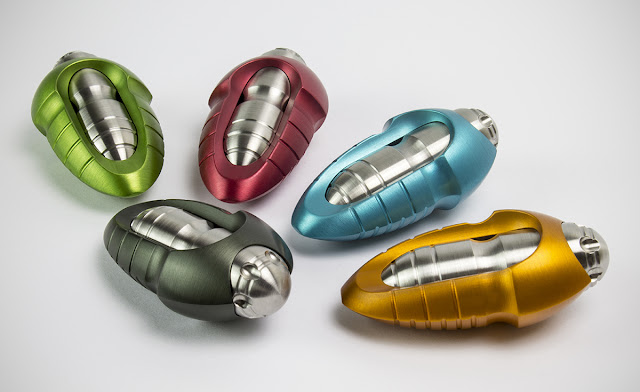 I had very briefly experimented with anodized aluminum inserts on the S1. What I initially found was that the friction inside the bore was too much for the exposed sharp edges of the inserts, which caused some chipping of the colored coating.

But on reflection, I realized I had it backwards all along. I started to wonder, what if I swapped the anodizing to the body? I reasoned that doing so would mean that the smooth and reasonably protected inner bore of the body would be the only portion of the coating that would be exposed to sliding friction. I wondered if that would be enough to prevent any chipping? A test was going to be the only way to find out.

So I made a prototype (the orange one) and have been putting it through it's paces all weekend. I am happy to report that it is holding up beautifully, even to some brutal accelerated aging. so I am now reasonably confident that this combination is going to work perfectly fine.

The reason for all of this trouble was so that I could produce the gorgeous array of colors you see above. Anodized aluminum is really the only way to produce such colors on a metallic finish, and it was something I thought was lacking in my other works. Plus it is quite fitting for a spring edition.

The aluminum is noticeably lighter, but the larger insert makes the total weight close to the S1. The sound of the sliding action is different from the S1 as well, which is a rare look at the acoustic properties of different metals. (there is always something new to be learned in with this craft).

So, as I have done with other small editions, If you are interested in adding one of these works to your collection, I will be opening these to pre-order only.

I expect demand will likely outstrip my ability to produce enough of these, so I have come up with a system that is as fare as possible, if not a little clunky and complicated. (all of this will be detailed on the pre-order form once I settle on the number of works I think I can make)

Pre-order will open this coming Thursday (April 20th) at 11AM (EST). I will send out a follow up to this newsletter at exactly that time with a link to a google form. This form is how you will reserve your place in line to purchase one of these sculptures. The form will also detail the pricing, shipping, and how payments will be processed.

This will likely be the only run of these I will make, as I have lots of other exciting things in the works.

So keep an eye out for the Thursday pre-order email.  And if you are reading this at some distant point in the future, I am sorry, but the moment has passed.

Posted by Chris Bathgate at 9:07 AM