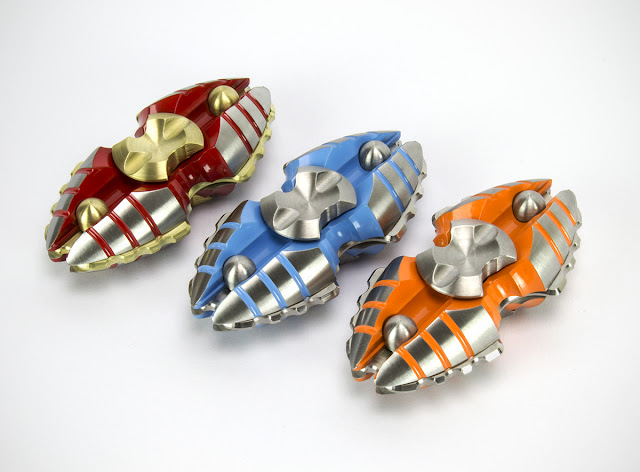 When Mike, Callye, and I started this project, spinners were a little known object that was relegated to a small niche of collectors and enthusiasts within the maker community. Now that we are wrapping up the project and shipping the last Artifacts to their collectors, much has changed. Including the addition of these three very special "one of a kind" pieces to close out the project.

Within just the few months it took to complete our project, the "spinner" as an object, has gone from something machinist and makers made for their own amusement, to a cultural and commercial phenomenon. Cheap plastic versions can now be bought in toy stores and even in the checkout lines at malls and pharmacies. News stories about them are everywhere. It is quite a lot to take in as the narrative I was writing to above has certainly changed a lot.

With anything that reaches a mass audience, there is praise and criticism, some people think they are the next pet rock, others express bewilderment as to why anyone would want such a trivial object, some think they are just kids toys.

But I stand by my original reason for wanting to make one.  No matter how spinners may eventually come to be perceived in the world at large, that the spinner represents an object that can be made in a limitless variety of shapes, materials, and designs, creates an excellent opportunity to experiment and talk about the intersections between fine art, commercial products, craft, and design.

It was a great project and that the spinner has attracted world wide attention (for better or worse) just helps to reinforce that belief. 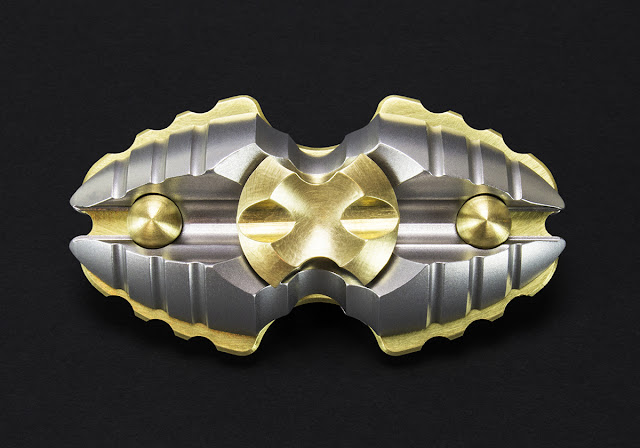 This piece is the second installment in a series of design collaborations I am doing with various machinist makers I have come to know. Like my previous joint project with Rich Stadler, the goal is to find projects that pose interesting new design constraints that may lead to sculptural insights I might not have otherwise considered.

This time, I teamed up with Mike Hogarty and Callye Keen from Revolvemakers to design what is known as a spinner. So first things first, a little bit about the two of them.

Mike Hogarty is a Master Mechanic and founder of Hotrods 2 Hybrids. He is a designer of custom motorcycle and automobile parts, and is a member at Nova-labs in Reston VA.

Callye Keen is a product designer and comes from a family background in low-volume, high-precision manufacturing, Callye now runs Red Blue Collective, a group that aims to help hardware startups get off the ground. Callye is also a member at Nova-labs in Reston VA. 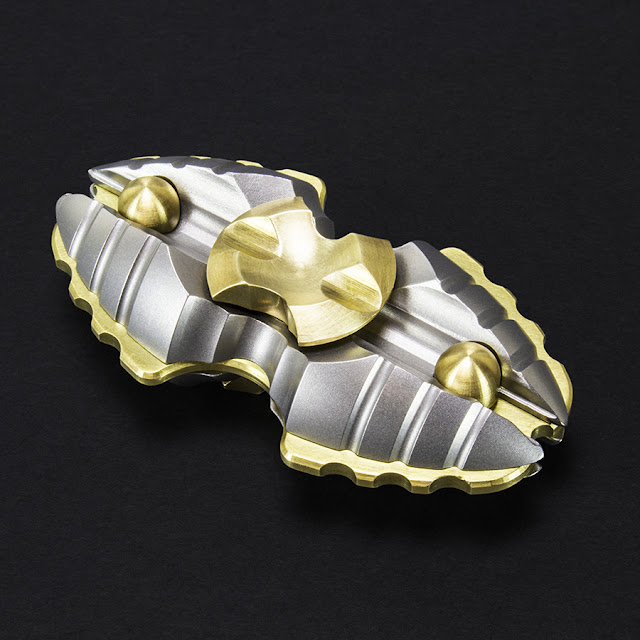 So now then, why this project?

It has been my observation that there are a number of aesthetic object making trends emerging within the machinist community. A small cottage industry has sprung up around making and selling things that are first and foremost, interesting to look at, but also serve some other utilitarian function as well. Some of these objects are becoming common enough that they are starting to represent tradition forms within the craft.

One of the most common aesthetic objects is something known as a "spinner". For those who may be unfamiliar, a spinner is an object with a ball-bearing in the center of it, that a person can sort of meditatively spin between the index finger and thumb. Most often referred to as a fidget toy, I much prefer looking at them as a type of kinetic sculpture ( I just can't get on board with the "toy" thing).

spinners are extremely popular, both to make, and also as collectors items. 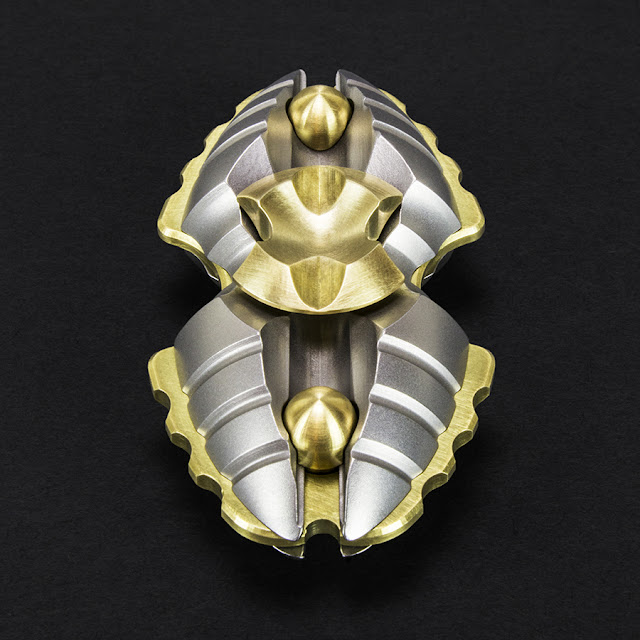 A very basic spinner is easy to build, and the design allows a lot of flexibility as far as what one can look like. The bearings used in them are affordable and readily available. The main design constraint is that they must fit in the hand, and be balanced enough to spin without wobbling. I have seen immaculately machined versions, as well as 3D printed plastic ones, and even intentionally crude looking spinners made from rough cut wood.

The machinist community has exploded with likely hundreds of spinner designs. Their ubiquity is why I was initially reluctant to make one. But after a few conversations with my collaborators, I came to feel that if the spinner is going to become a traditional form within the machinist art community, it may likely become a sort of "rite of passage" to design and make one - and so I was in, and now here we are. 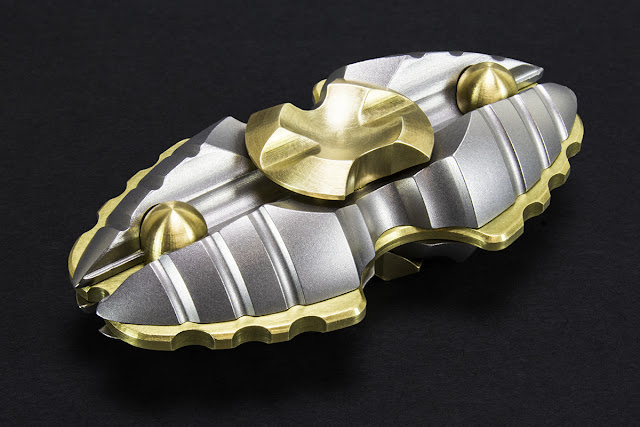 So down to brass tacks and design notes. While there have been many interesting spinner designs made already, one of the biggest criticisms (and it is a loving criticism) I could level at most of the work I have seen, is that many spinner designs do not transcend their medium very well.

So that was sort of my charge with this design, to break from this flat-bar mold and push the geometry into something that was not reflective of the starting stock. I wanted to find complexity within the relatively simple design that is the spinner.

But as an aside, I rather intentionally included the brass plate in the middle of this design, as a sort of reference to the flat stock criticism I was working against. As maybe a contrast, or some intentional dissonance, maybe even affection for those who came before, I think it is likely a little of each. 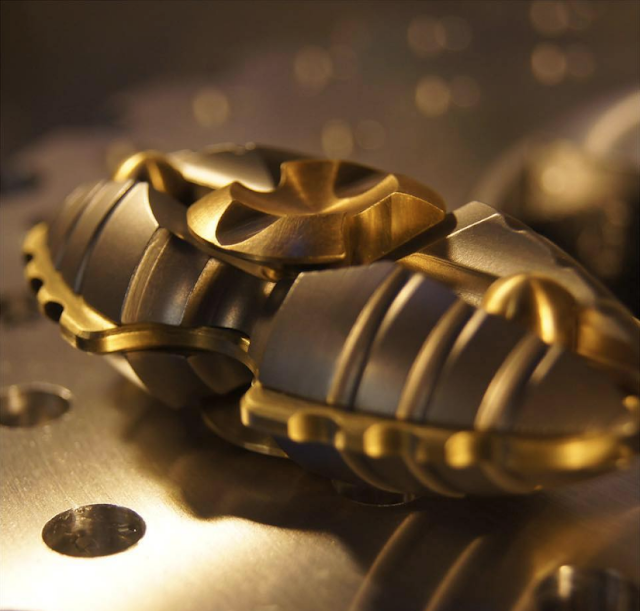 Having now designed and made a spinner, I certainly think it is a worthwhile exercise from a domain knowledge standpoint. I think younger machinist and people beginning to experiment in the metal arts can get a lot out of a project of this nature. Making a spinner addresses fundamentals of both machine work and visual composition, so in a lot of ways it is ideal.

Anyhow, I find the end result of my experiment to be such a nice little object to look at, I am not even sure it would matter to me if it spun or not..Im joking..mostly 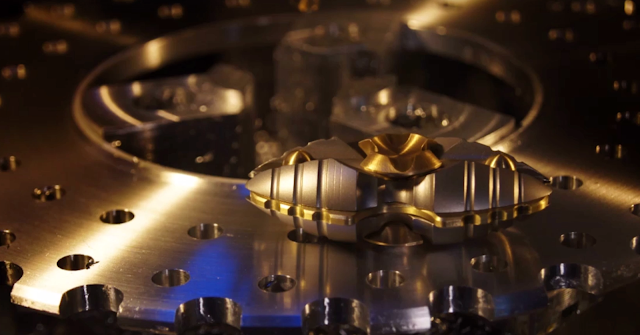