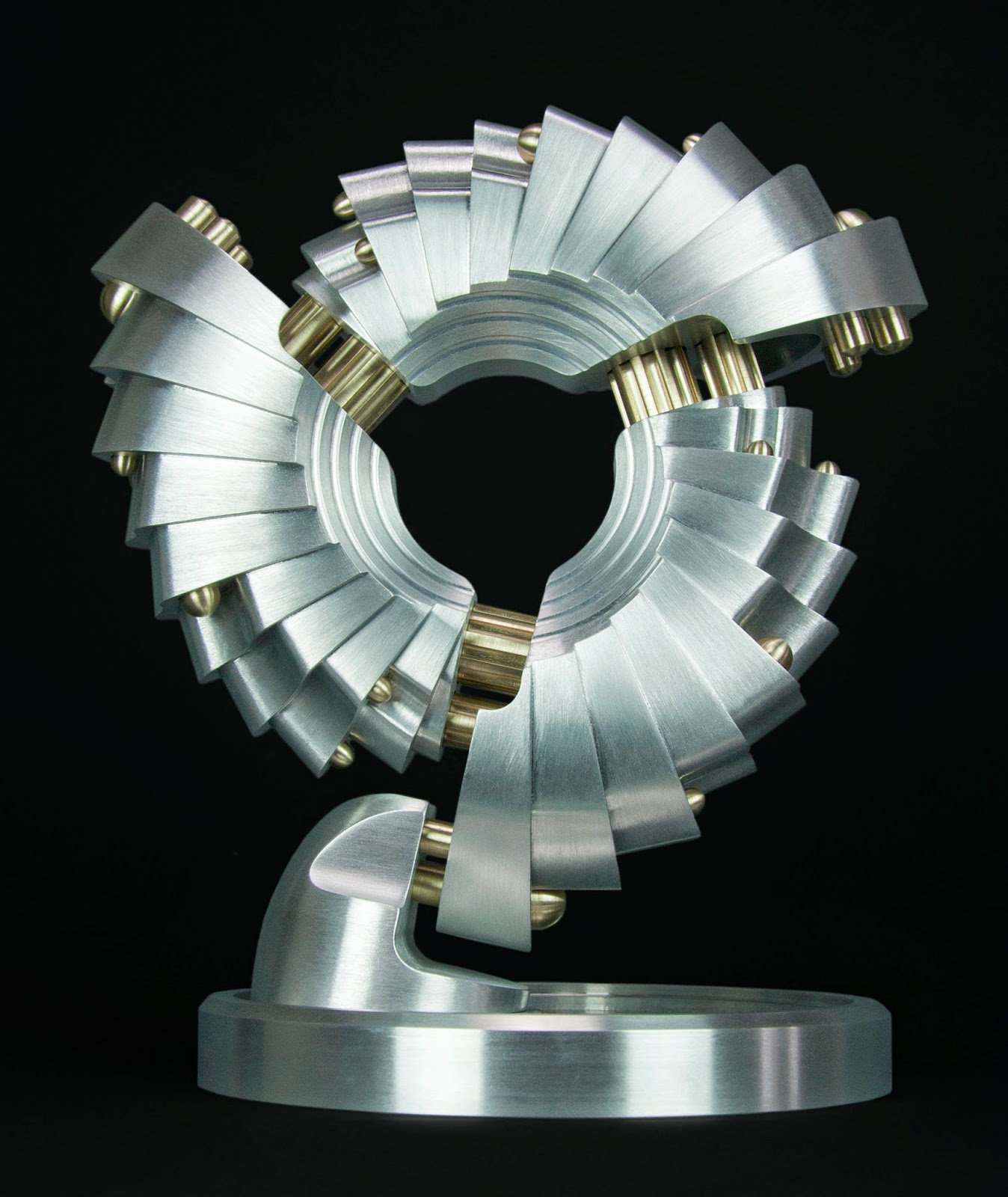 Hello everyone, Some news and new work. Here is my effort for April. It is a nice medium sized work made of Aluminum and bronze, it stands 8.75" tall by 7.625" wide and 6" deep at the base. 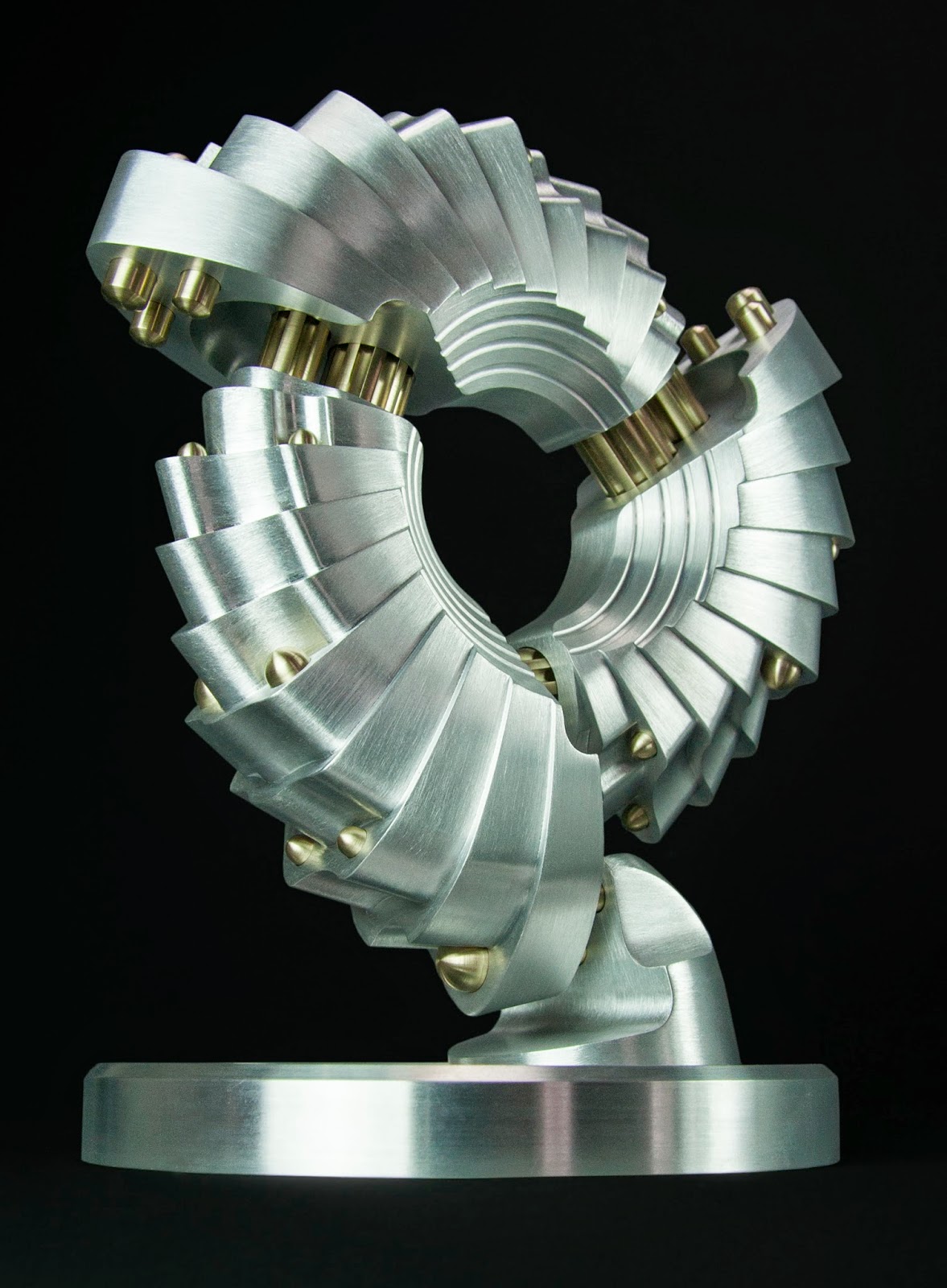 The main element for this piece was borrowed from a much older design that was giving me a lot of trouble. It just wasn't going anywhere, so I salvaged the useful elements and reworked it until I arrived at this rather unexpected ( for me anyway ) form. 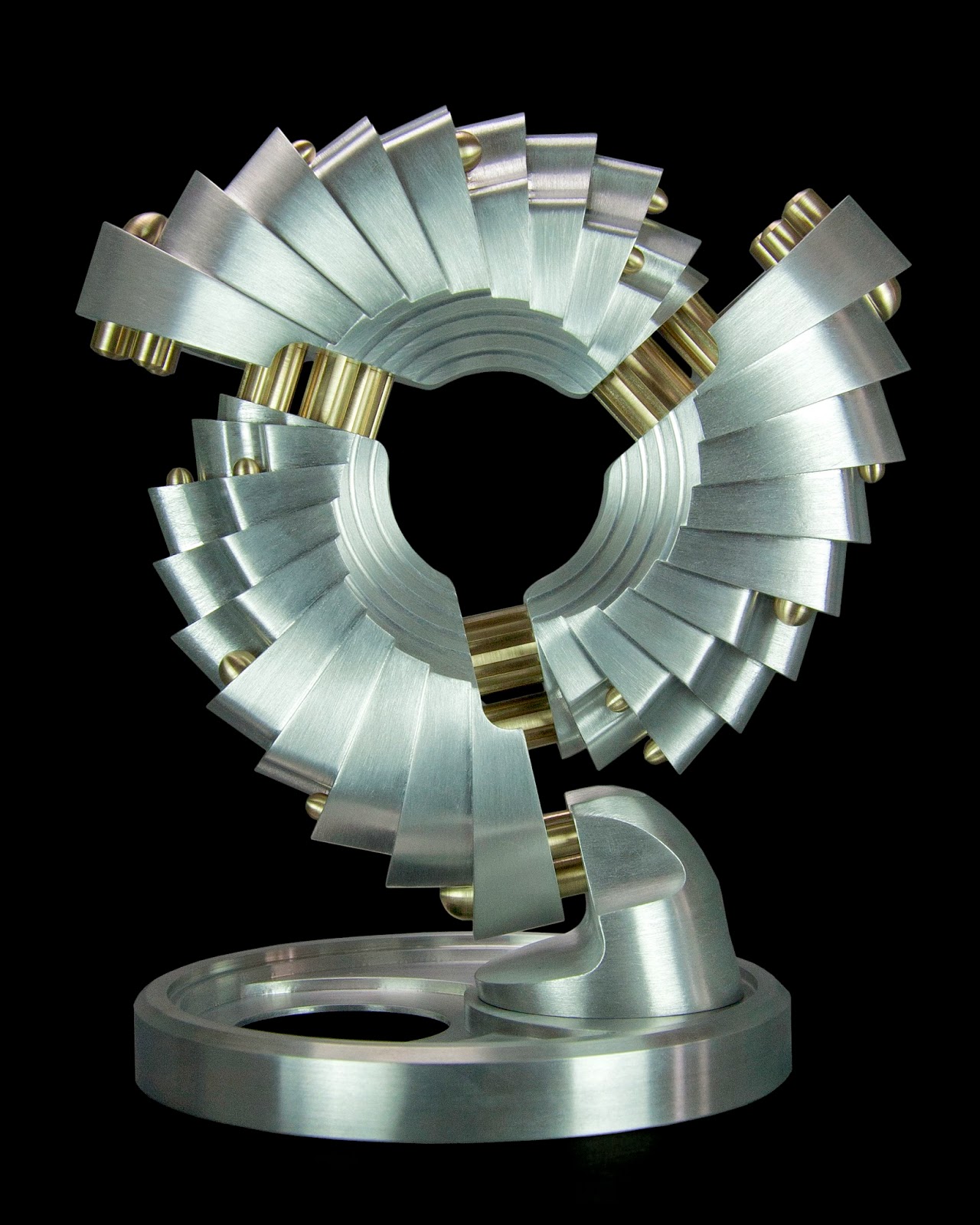 Drawing a design is always one thing, but building it is another thing entirely. This was a technically very complicated shape to create, I spent nearly as much time planning the process I would use to create the parts as I did actually making the parts themselves. 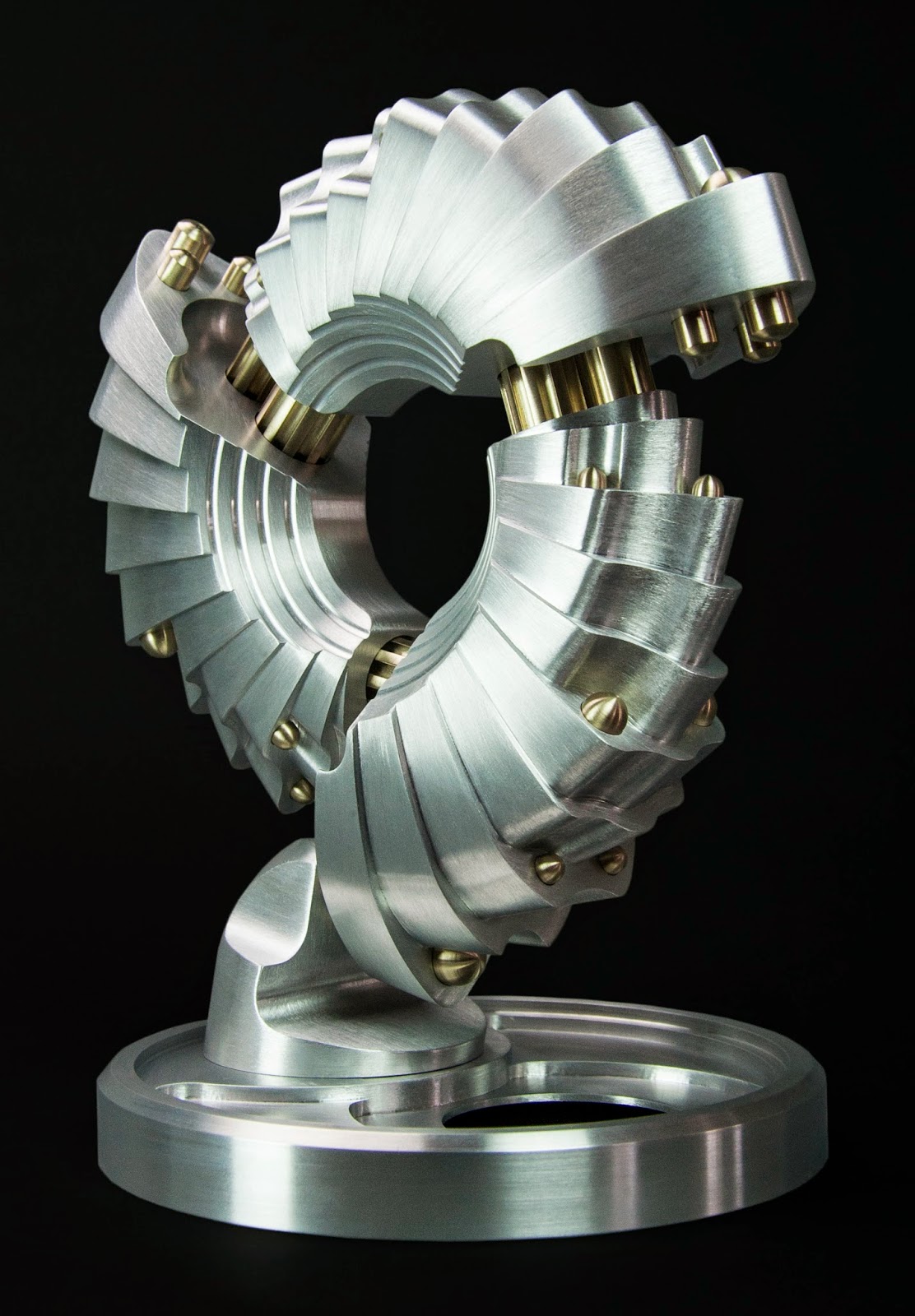 People often ask me if CNC tools make complicated shapes easier to produce. I always answer "yes and no" and this piece is a great example of why I give that answer. The three main Aluminum elements in this design were complex to the point that there was no reasonable way to cut them without using a CNC machine. On the other hand, because they were geometrically complicated and at the same time, one of a kind, I could not trust any of my usual automated processes for generating the tool paths for the milling machine.
The CADCAM programs I have work well for simpler parts, but because the work had to be rotated many times and had multiple overlapping facets, I had to create the tool paths the old fashioned way. And so I ended up spending two days checking geometry, plotting coordinates, and writing the entire G code program line by line, all by hand. It was a tedious task, and it was certainly by no means easy. 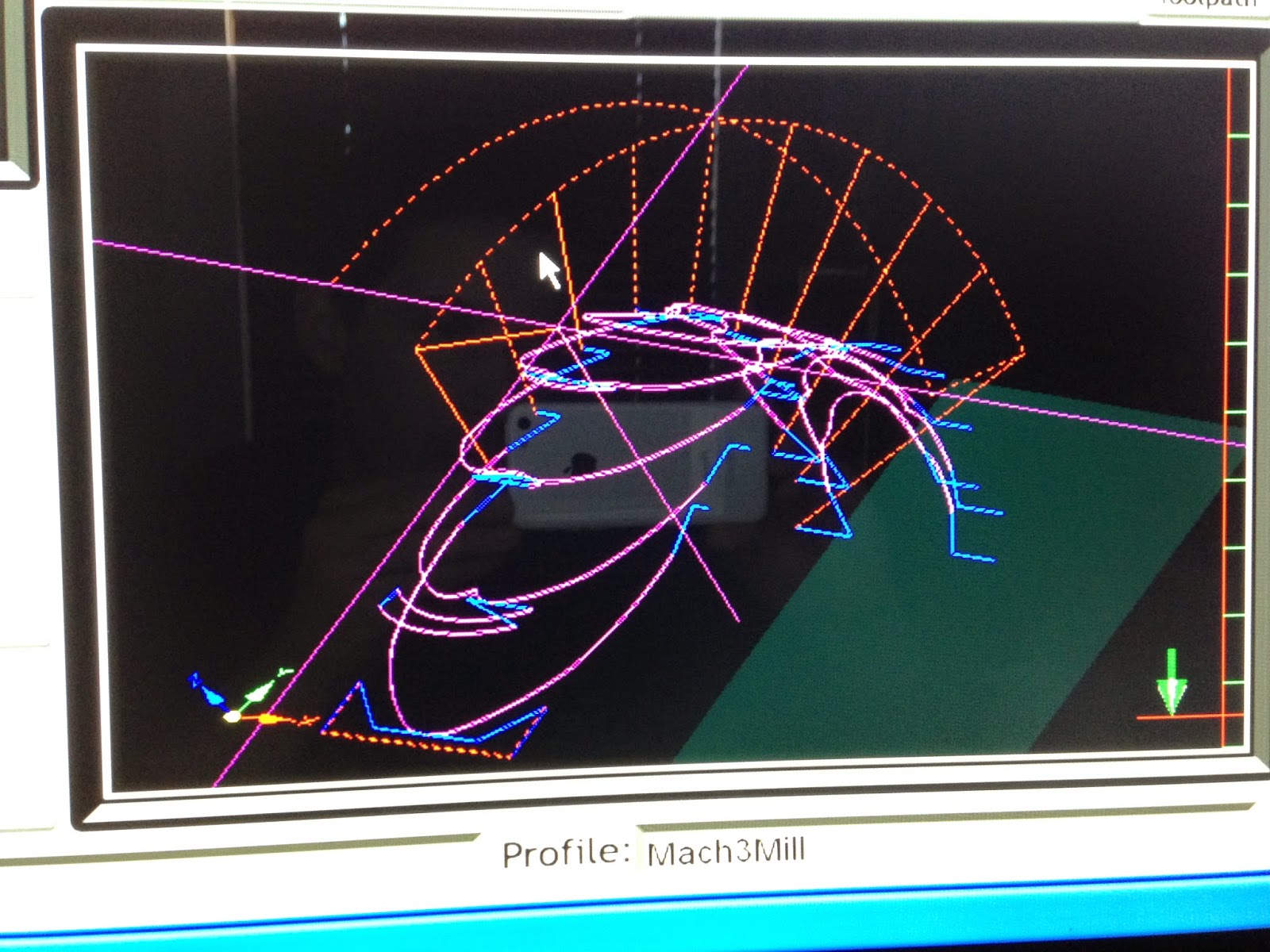 Here is a visualization of the main profiles of that program. This was just checking the initial tool perimeters and did not take into account the depth of cut, number of passes, starting Z, or Arbor clearances. There are a lot of things to account for, but perimeters are the first basic step. 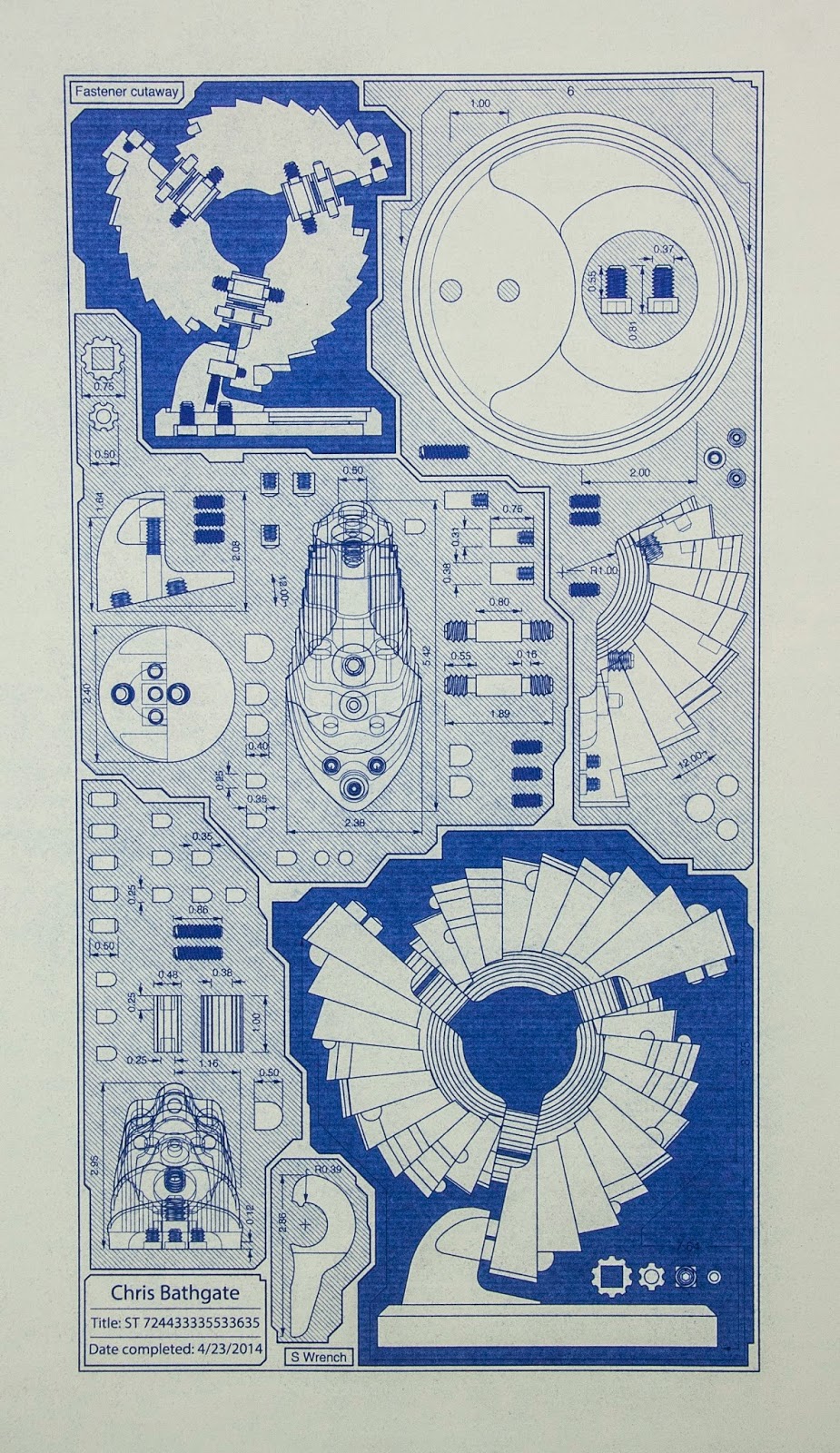 To assemble the finished work, I fell back on a previous fastening method involving custom made turn buckle style bolts and driving gears, which are the bronze bits connected each of the three segments.
The detail in the upper left corner of the blue print depicts the general fastening arrangement. 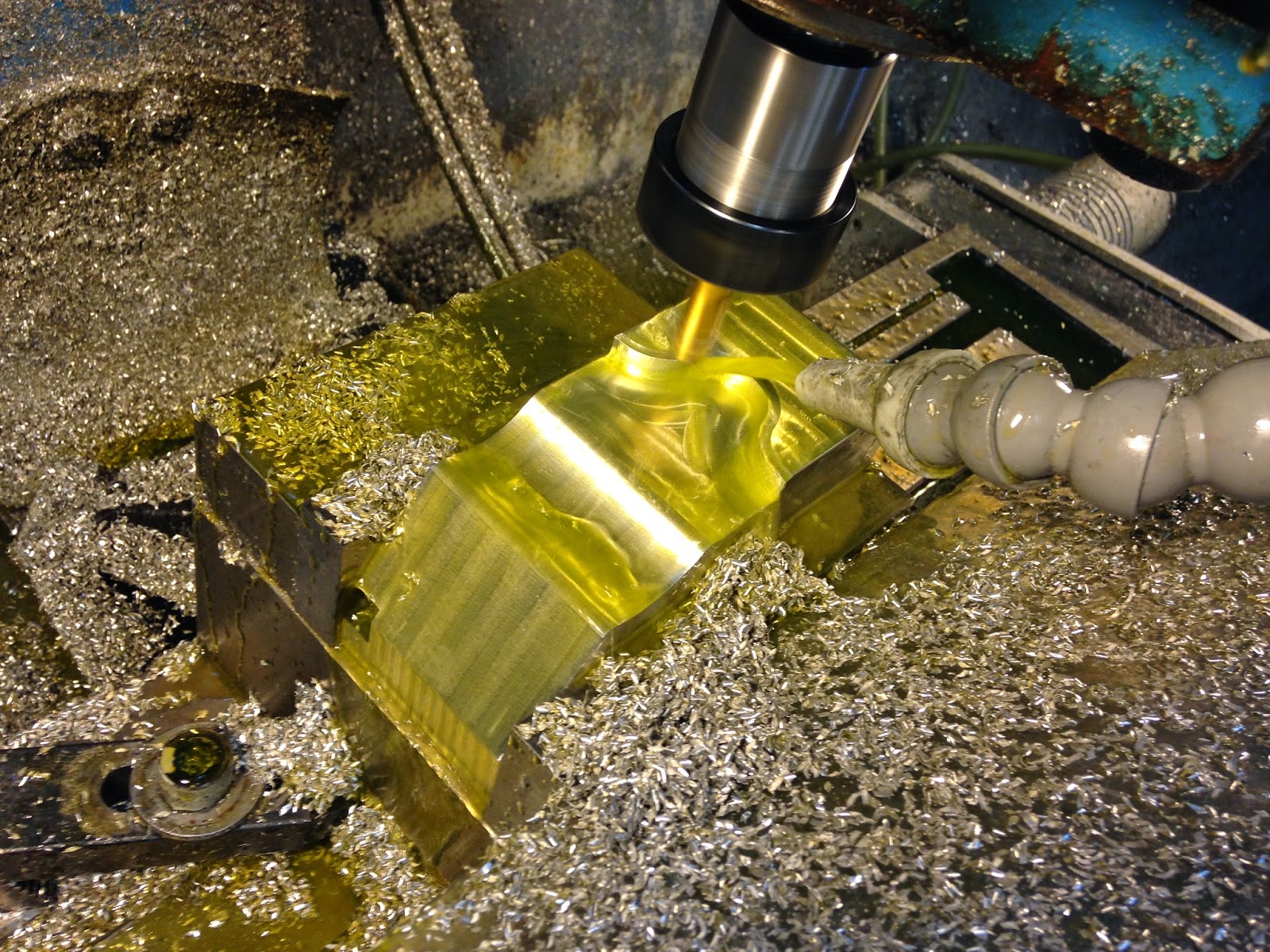 One complicating factor for producing this piece was that the finished shapes have very few surfaces that can be reliably indexed off of for set up and measurements. The solution was to machine the blanks with a few extra temporary grooves that I could use to locate the tooling off of for the subsequent steps and then those grooves would be machined away in later steps. 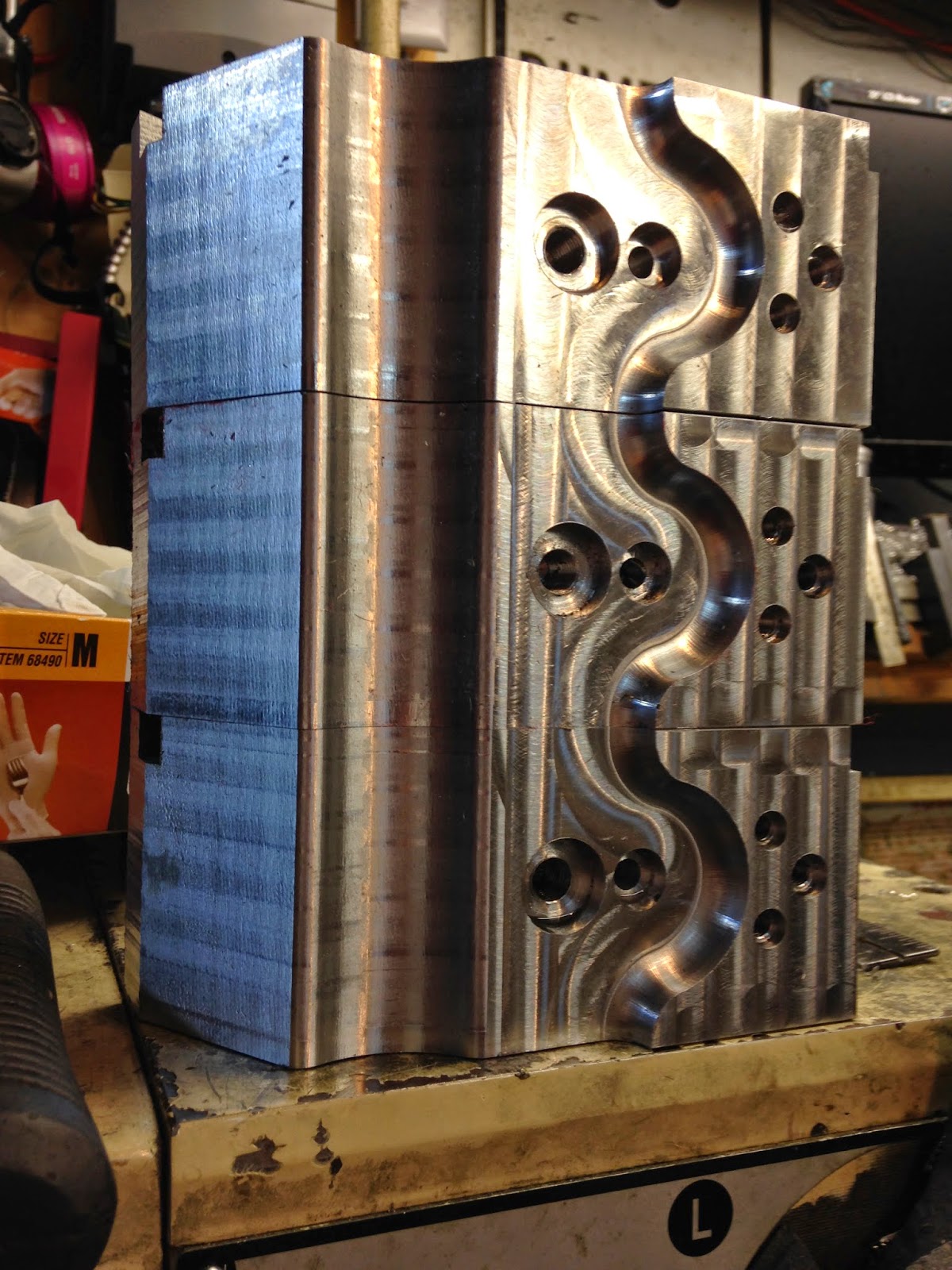 Here are the three main blocks almost ready for the big cutting program (described above) that would define their final shape. All of the drilling and other detail operations basically had to be cut in advance before all of the good measuring and gripping surfaces were machined away. 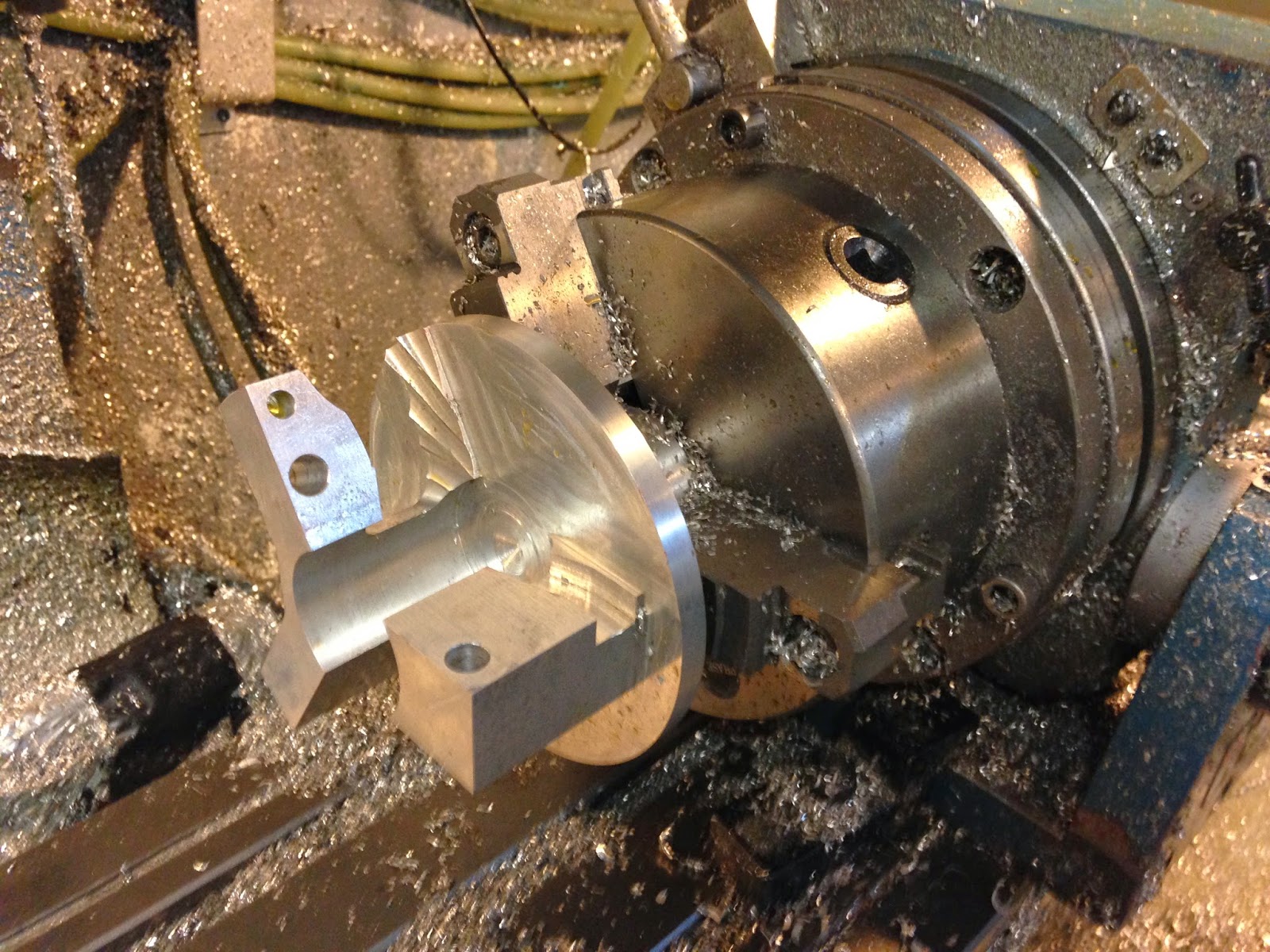 A very special arbor that could hold the parts securely while providing all of the necessary clearances for the tool cutter also had to be fabricated.

Above is a time lapse of the main milling operation I have been describing, this was originally a 10 hour program, but after some refining and tweaking, I was able to streamline it down to about an 8 hour cycle for each of the four parts I cut (I always make an extra). 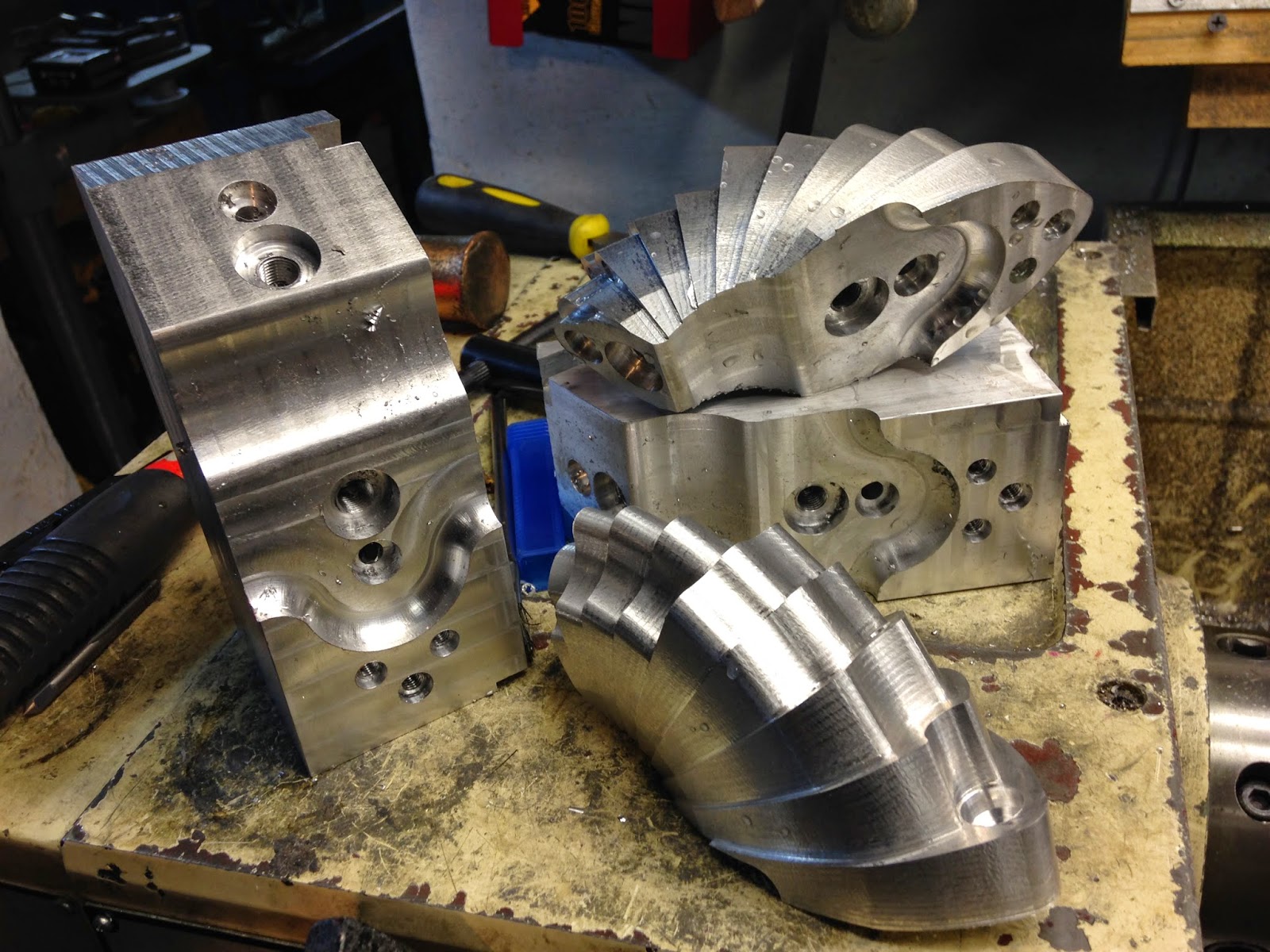 Some before and after shots for that operation.

And finally to finish these, there is one, or rather two (two sides to cut) more turning operations.  It is a rather harrowingly unbalanced turning operation on the lathe as depicted in the above video. This was to cut the inner taper with the ringed grooves for the final shape. (It is best probably to just watch these on youtube, they display a little small on blogger for some reason). It all looked rather dangerous to me, but it all came out quite well once I found the spindle speed that produced the least amount of vibration. 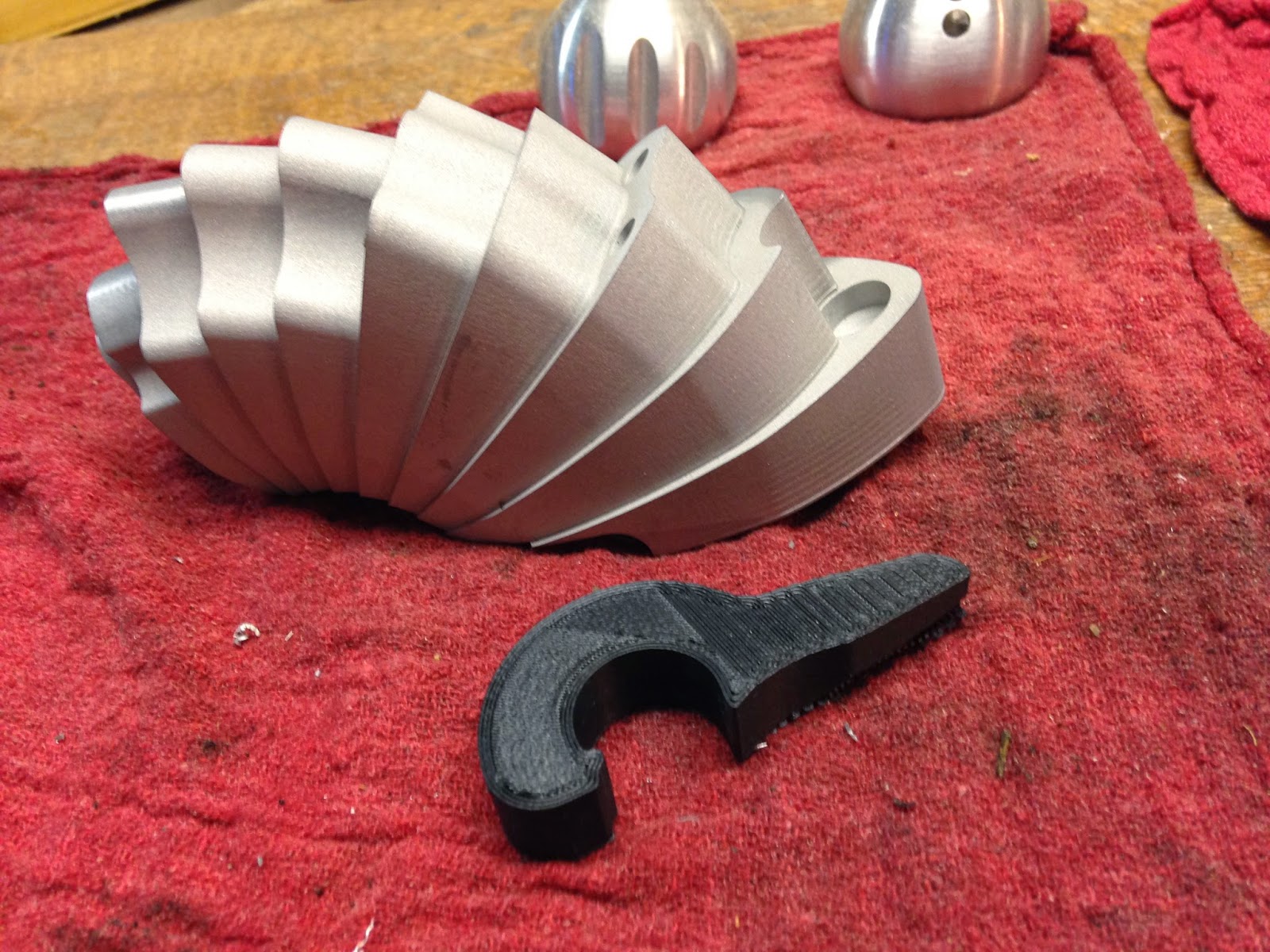 Lastly, I keep talking about custom tools in my posts as of late and it continues to be something I think about. This project's special tool is not quite as glamorous as some of the previous ones because it is just a 3D printed spanner wrench, but it was needed to tighten the turnbuckles and was quite functional, but not much of a challenging feat and certainly not much to look at.

On the other hand, I did make an extra part for the body of the piece. Due to its complexity I wanted to have a spare should anything go wrong. Fortunately everything went smoothly and now I have a rather interesting spare part.
For a change, I think I am going to try and adapt this into another new work. I do not usually like starting with such a defined shape, but I think I have a lot to work with here so I am looking forward to that as my next challenge.

Lastly Still,  I am having a solo show in Martinsburg, WV starting next week at the ek-sə-ˈbi-shəns Art Gallery. I will be sending out a separate email notification once I have the full show announcement. But this is a heads up if you live in the area. Lots of works and Drawings going on display this weekend.

As always comments and questions welcome.