Incorporated knife tech into the world of Machined Metal Sculpture. 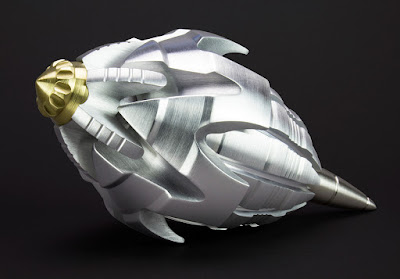 Over the last few years, I have undertaken a much more serious examination of how my process fits into a wider conversation about art, craft, and design. I have been searching for potential connections between other industrial craft heritages and my approach to machine work as a medium for sculpture. I am curious to learn how other previously industrial processes, such as glass work and ceramics, have transitioned into the fine and decorative arts in order to better understand the arc of my own journey.

As part of that research I find myself looking more and more at the knife community, both for inspiration in my own work, and also as an example of how machining can influence and be transformed when it is appropriated by an existing craft or decorative arts community.

I have come to discover that knife making is that rare craft that continues to embody both medieval and modern practices. Where it was once dominated by forges and blacksmiths, it is now as high tech as you want it to be. Knife makers use every modern machine tool you can imagine, but you can also find practitioners still putting hammer to anvil and engaged in processes from every stage of its long and storied history. Knife making is a craft that precedes the invention of machine tools by millennia, however it has been utterly revolutionized by them and it has created a foothold for the decorative arts within the machining community.

If you look around the knife world, you will see that most knives are not the utilitarian work-a day objects you first think of, but instead are some of the most intricately detailed and aesthetically thought provoking machined objects you will find anywhere. Even if knives are not your thing, any serious examination of machining as it pertains to the arts warrants a close look at what is happening in this field. I myself have been itching to find ways to build bridges between what I do, and what the knife makers I have come to admire do. I humbly submit this work as my first attempt. 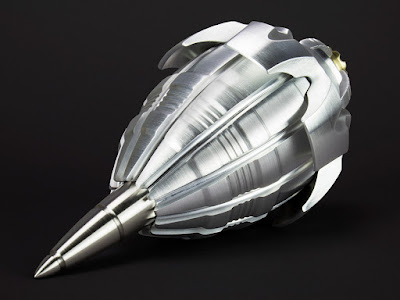 So, lets get started then.

First off, as you can see, this work does not very much resemble a knife (sorry to disappoint). However, it does in fact share many aspects, including its guts, (or rather mechanics) with an object familiar to any knife enthusiast.

This work is loosely based on a very common type of automatic knife called an "OTF" or "Out The Front" knife. Sort of like the much more popular switchblade, it is characterized by a spring loaded assembly that extends and retracts the blade through the top of the knife by means of actuating a small lever.

In the case of my work, the center object moves both "Out the Front" and "Out the Back". Surely some crazy knife designer has made a knife like this somewhere at some time, but in any case, I am calling this work the "OTFB". The B stands for more than one thing, but I have given you the most obvious one.

In all honesty, an OTF knife is more for fun than it is useful as a practical tool, and that is exactly the sort of extravagance that made it an easy target for something a bit more sculptural.

Before I started this project, I didn't have a good conception of how this type of assembly worked. Luckily a collector friend kindly lent me one of his prized OTF knives to take apart and play with (I can't believe he let me take it apart!!!). Upon doing so, I found the mechanism simple enough to modify, elegant, and irresistibly fascinating.


After digesting what I had learned for a few weeks, I set about designing my own version of the assembly . I redesigned the mechanism into something much more tubular, so that rather than a flat blade, it could move an object that was decidedly larger and more complex. It also needed to be something that could be incorporated into a range of possible sculptural objects. I had my work cut out for me, but after building three prototypes, I had come up with something quite functional. 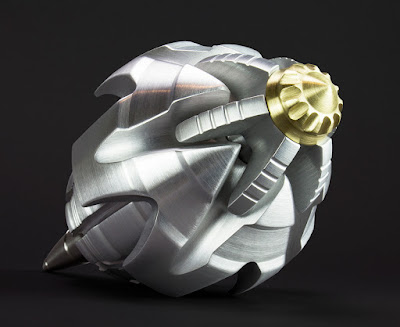 From there it was a very long and tedious process of arriving at a composition that complimented the functionality while also concealing it as much as possible. As with all of these kinetic endeavors, I am very careful to ensure that what I create presents as a sculpture first. In this case it meant limiting obvious visual indicators like the tell tale switch that accompanies most OTF knives.

To solve this issue, I ended up translating the simple sliding thumb switch into a rotating action. This allowed the body itself to become the actuator rather than relying on any knobs or buttons. It was a clever solution that made it easier to concentrate on the overall look of the object.

For those technically savvy,  it also has the added benefit of creating a small amount of mechanical advantage, lessening the effort on the part of the user needed to load the spring in the assembly. 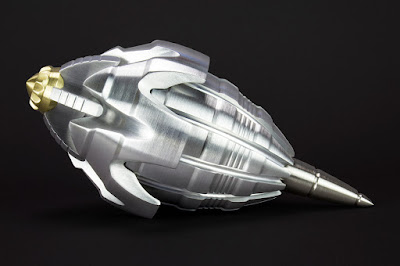 So where does this project go from here?

Well, I consider this first piece to be just the working prototype. There is still much more refinement ahead of me in terms of tightening up the mechanics and tweaking the looks. I think the best way to facilitate this is to do a series.

I have in mind a very small edition of these, maybe 6-12 total objects. For a project as mechanically complicated as this, I think it is the right way to go. I want to be able to take my time improving and experimenting with each one, but I also want to be able to move on to something new in a reasonable amount of time (you know me, always moving forward).

I made this first one in raw unfinished aluminum to keep it as kind of a blank slate, as I envision doing each consecutive one in a different finish and color scheme in addition to making many compositional modifications and changes along the way.

While I will keep the overall format similar, I expect each one to have a look and character all its own. 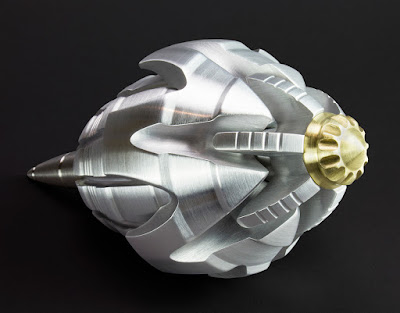 So in the short term, I wanted to share this first iteration with all of you. I imagine some of you might be interested in adding one of these to your collections.

I will open my books to orders for only a few of these, but it will be a one time event like all the other editions, and it will be extremely limited.

I will make an announcement as soon as I figure out the right way forward on this. I suspect the number of people who might want to collect one of these may far outstrip the supply, so I need to figure out a fair system, as well as get a better handle on the total costs.


In the mean time,  I hope you find this all as interesting as I do and, as always, questions and comments are welcome.

Posted by Chris Bathgate at 9:10 AM