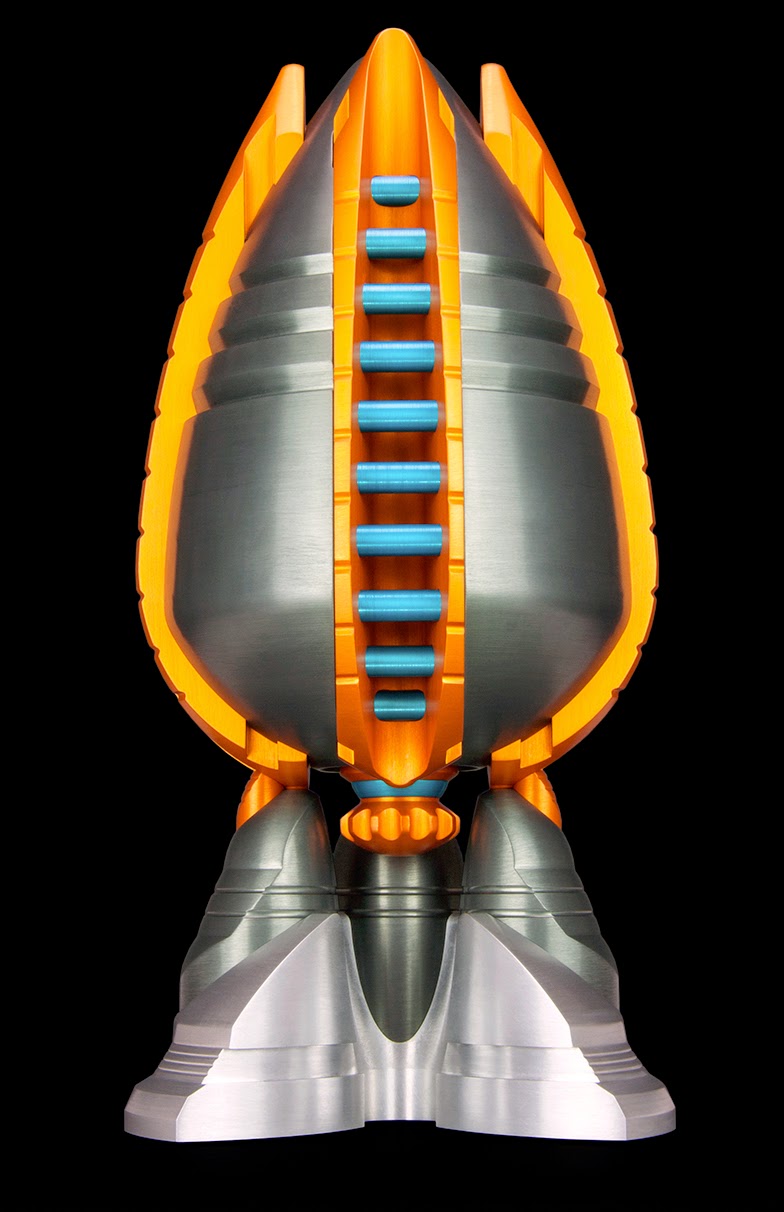 Introducing my newest machined metal sculpture, (#102 since we are now keeping count) 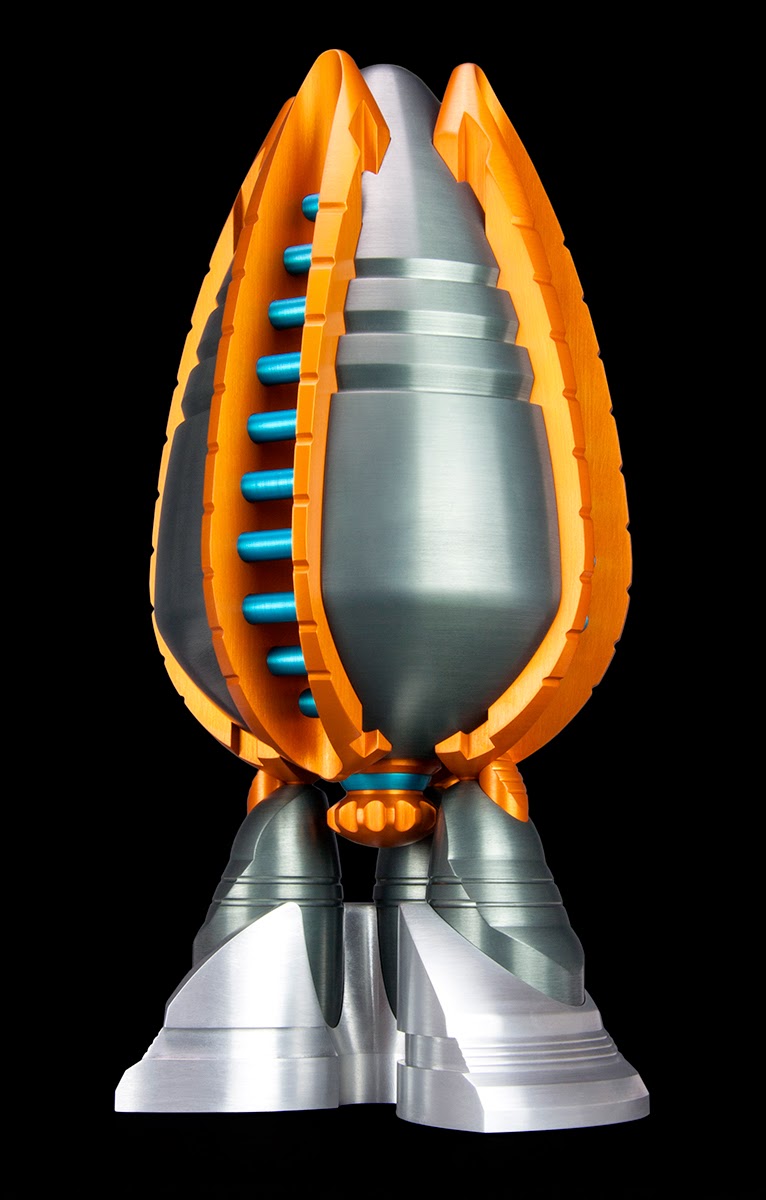 This newest work stands approximately 14" tall by 7"Diameter. It is my first major experiment using grey anodizing (I did do a small study first). I was pleased to see just how much the grey works to bring up the other colors in the work, more than I had expected it to.

This work is also made entirely out of aluminum (mostly Anodized) which is also a little uncommon, as I usually rely on different metals for my variety of colors. 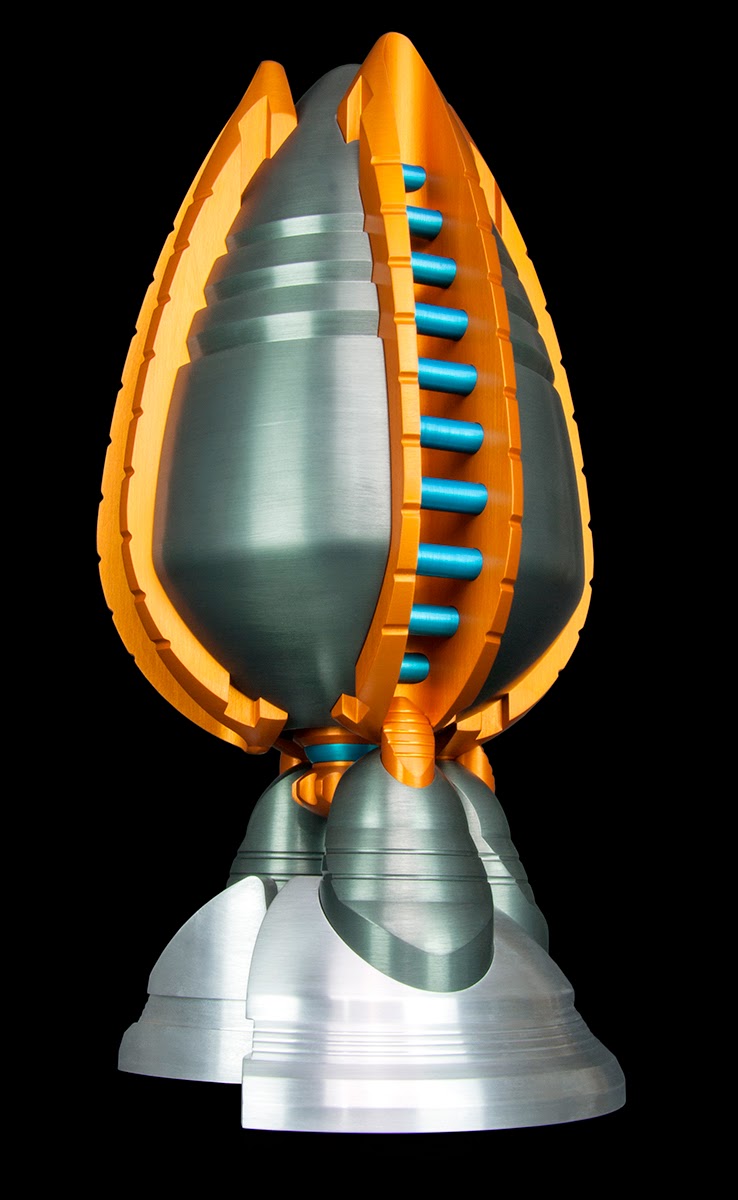 The first conception of this work was actually as a hanging piece. I had done a hand full of sketches around the idea of using different process concepts, but applying them all to the same standardized shape. this design element was the only one that really stuck with me out of the whole bunch, but below is one of the sketches I worked from. (you can see a few more examples of some of the other ideas I was playing with). 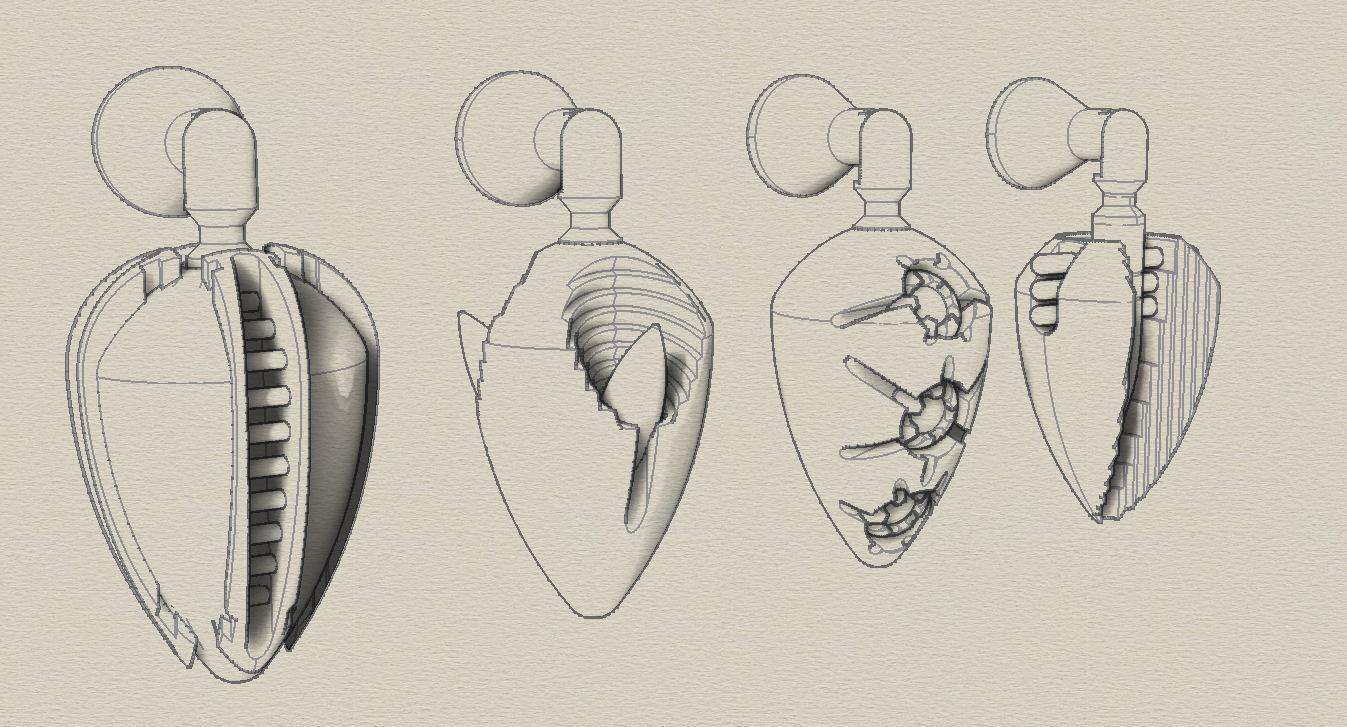 For this particular piece, I was thinking about ways to incorporate T slot grooving into a design, and to see what complexity would emerge from that relatively simple requirement. The others were also based off of unique design requirements of their own, but none of them were as promising in my eyes.

As is always the case, an idea tends to get flipped around and reimagined as it progresses. The vessel shape eventually came off the wall, and was turned on its head and fleshed out from there.

The personality the piece took on once I had worked out the lower half really grabbed me. To my mind, the design alludes to a number of popular visual references (which I will abstain from listing), without really committing to any of them (I wish I knew a better way to say that). 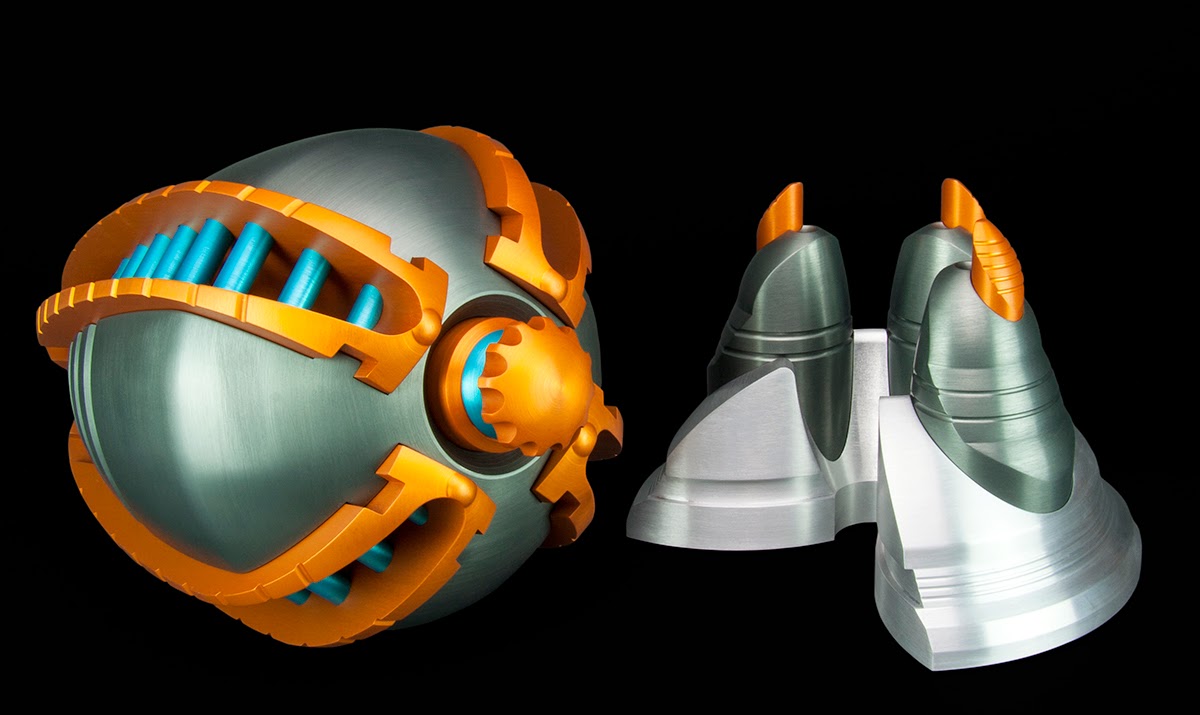 while rather large for a detachable base design, I went ahead with it anyway. It is rather heavy to be perched atop just 3 little divots in the base, but I think it sort of adds a little daring to the work. 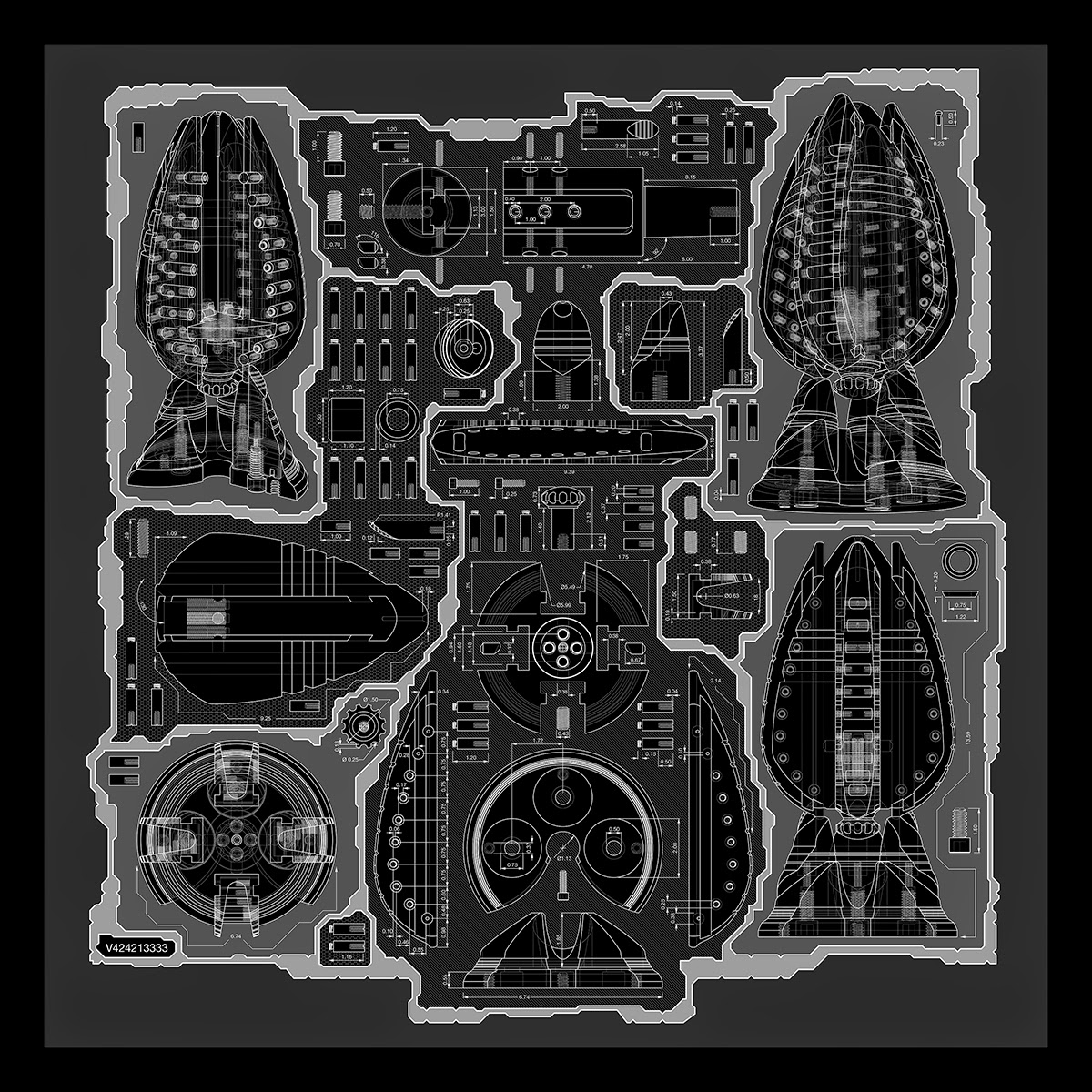 The drawings are starting to click more as well. I find things are coming out more intuitively, as I am becoming more comfortable with the language that is emerging.

I am also working on a way to present these in their purely digital form. I feel like I have taken the blue-line prints about as far as they can go, and so am considering retiring that format. I am looking into new options for these grey scale versions. So stay tuned for news on that front in the near future.

Process Notes:
turning larger work, always requires a little extra support. This piece barely fit in the custom steady rest I had modified for this lathe, but I was able to get the part cut as I needed. 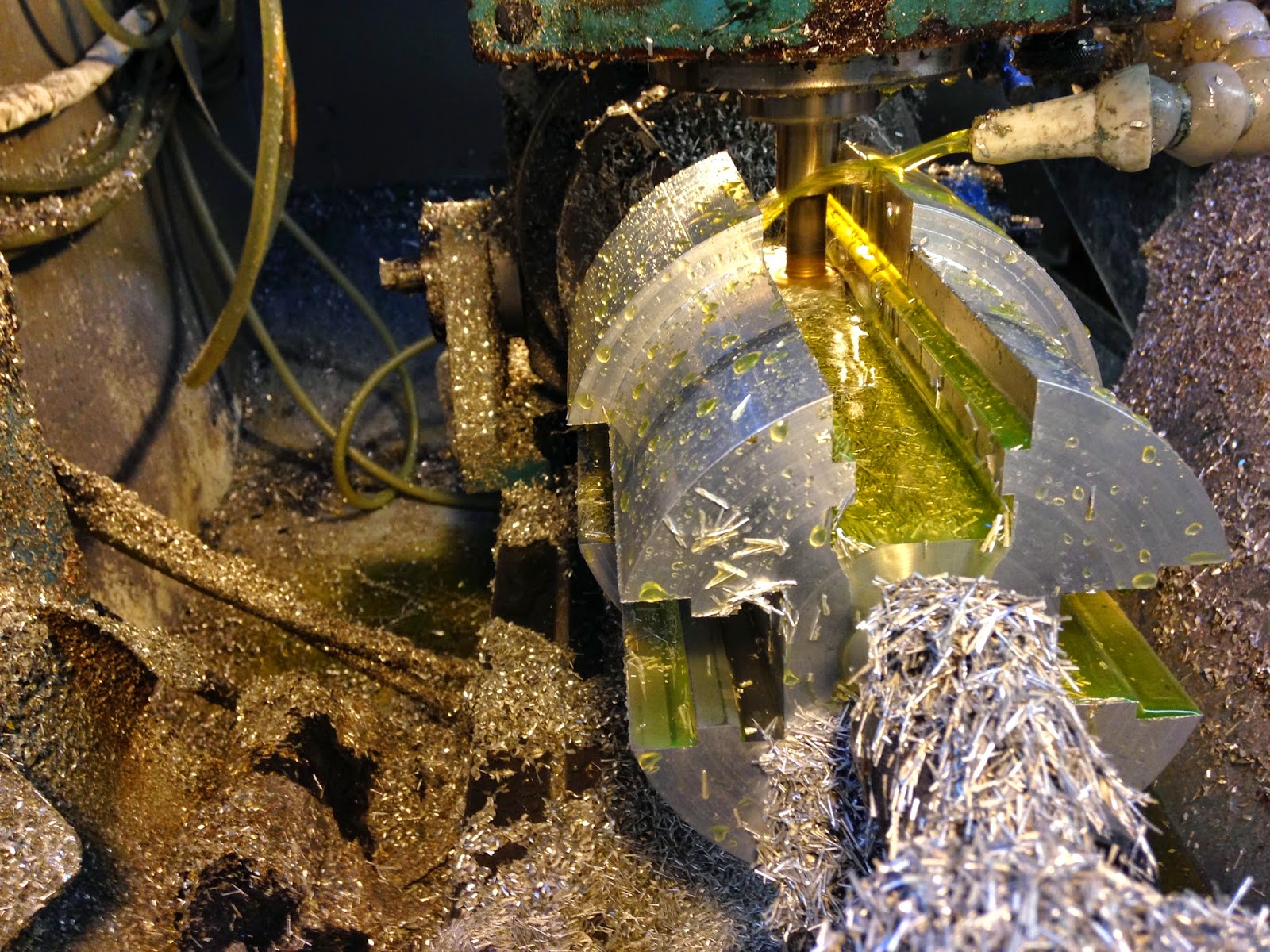 Even though they are a main stay of tool room work, I really had never cut T slots before. Primarily used for clamping fixtures, they require a specially shaped cutter to make, but they seemed to me to be ripe for aesthetic consideration so here we are. 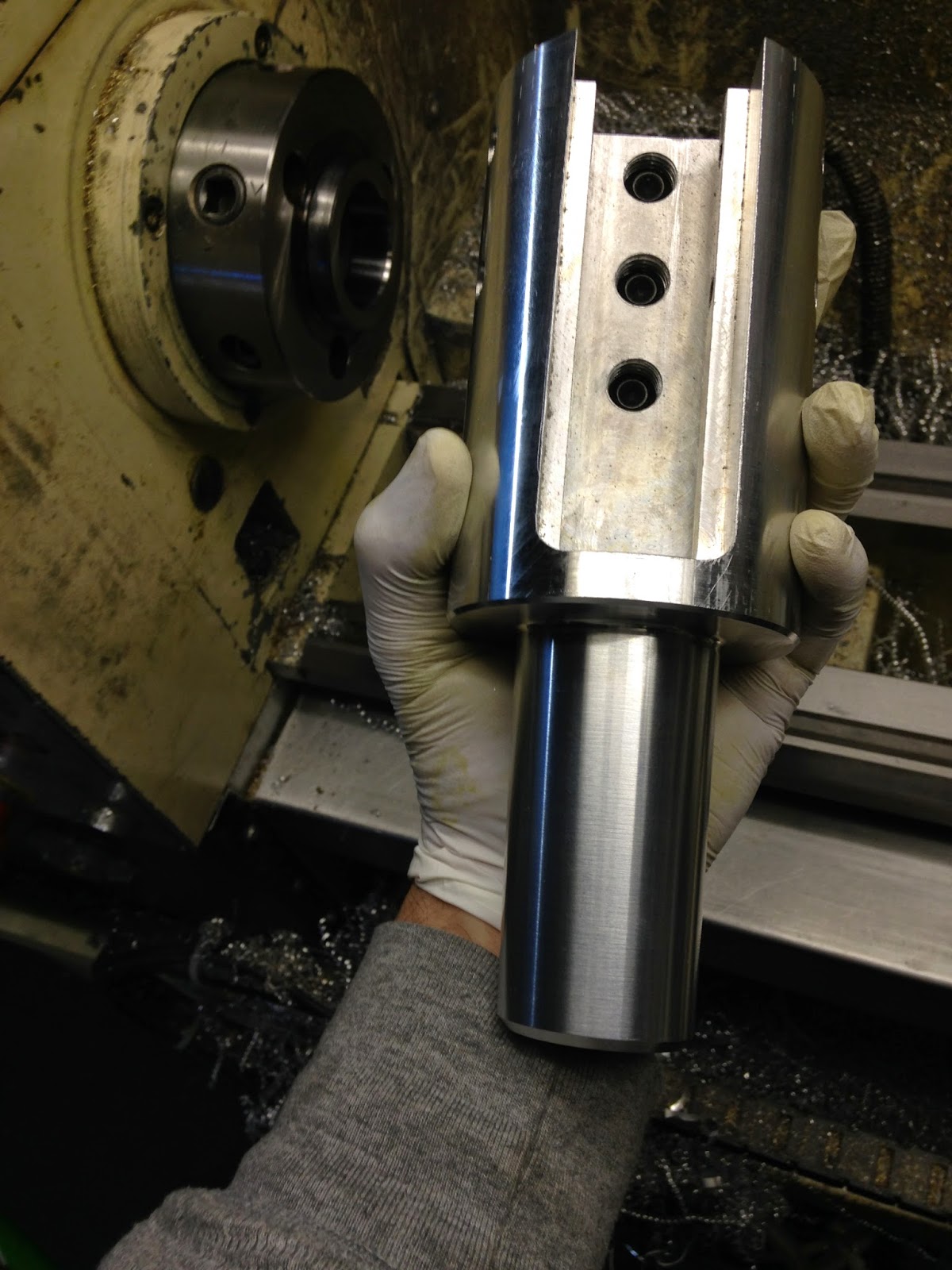 This piece also presented a new work holding problem for me. Turning the Four "T shaped" bars that would eventually fit into the slots on the the body of the work required some outside of the box (or chuck) thinking. They needed to be held at a specific offset to be turned, but the parts did not have a geometry that allowed them to be readily held in any kind of chuck or arbor I had ever seen. So a new kind of arbor had to be fabricated especially for these parts. Here was my solution. I have shown this around on some of the machining blogs and forums. No one that I spoke to has ever tried anything like this before. Basically it is a T slotted arbor to match my one of a kind operation. I machined the back taper to fit directly into my lathe spindle so I could remove the chuck and reduce the distance it would stick out of the machine. (which is very important for long unsupported work) 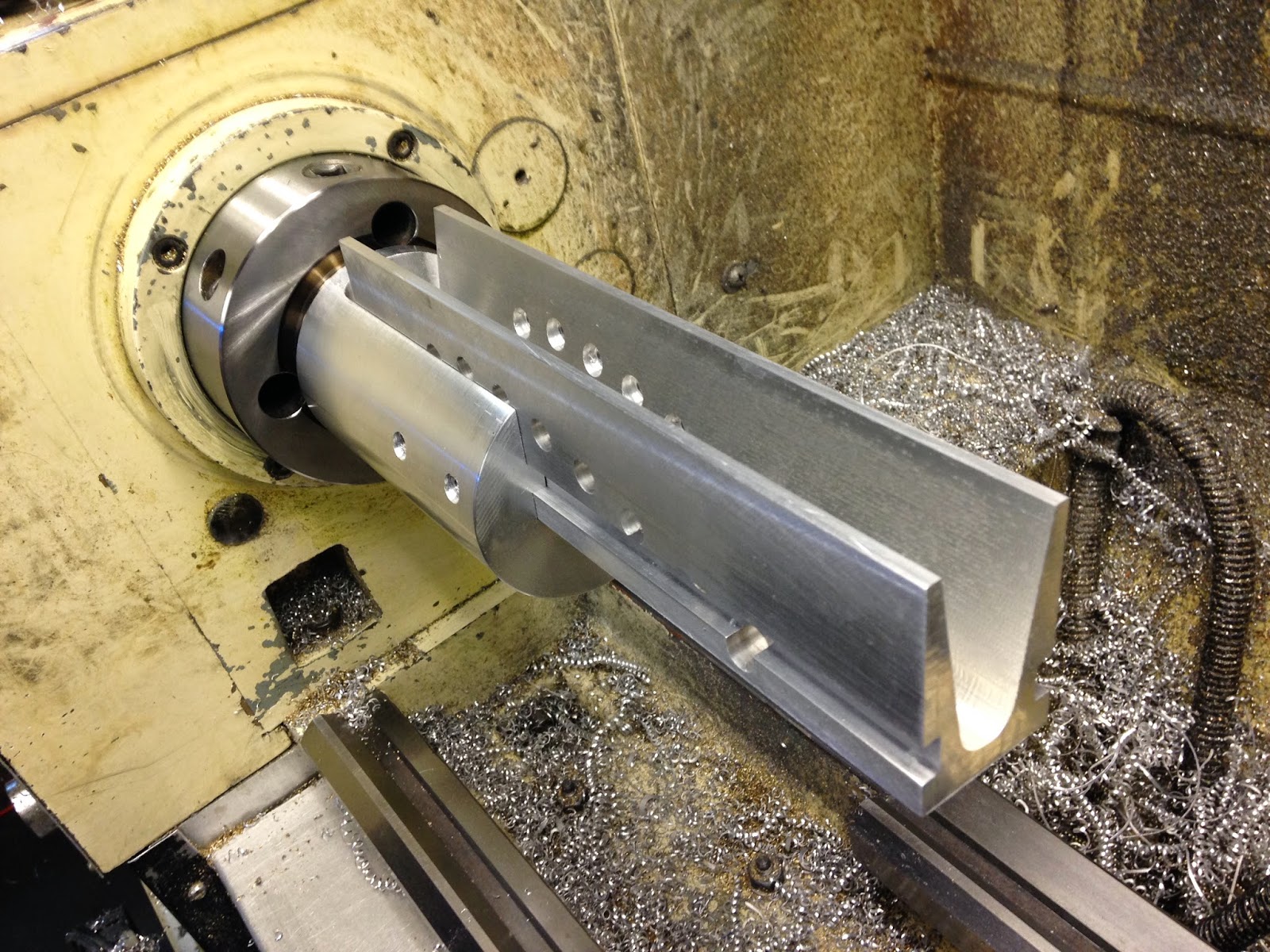 As you can see, the part to be cut slides directly into the slot at exactly the center offset I need. there are two groupings of set screws in the arbor; one set helps align the part, while the second pushes up on it, driving it against the slot and clamping it tight, just like a proper T nut would.

This is also true in the final assembly. there is a brass cylinder that drives against the back side of each of the four T bars, clamping them tightly against the main body. It seemed important to me that if I was going to explore T slotting as a visual design element, that however that idea was implemented should preserve its original design function. 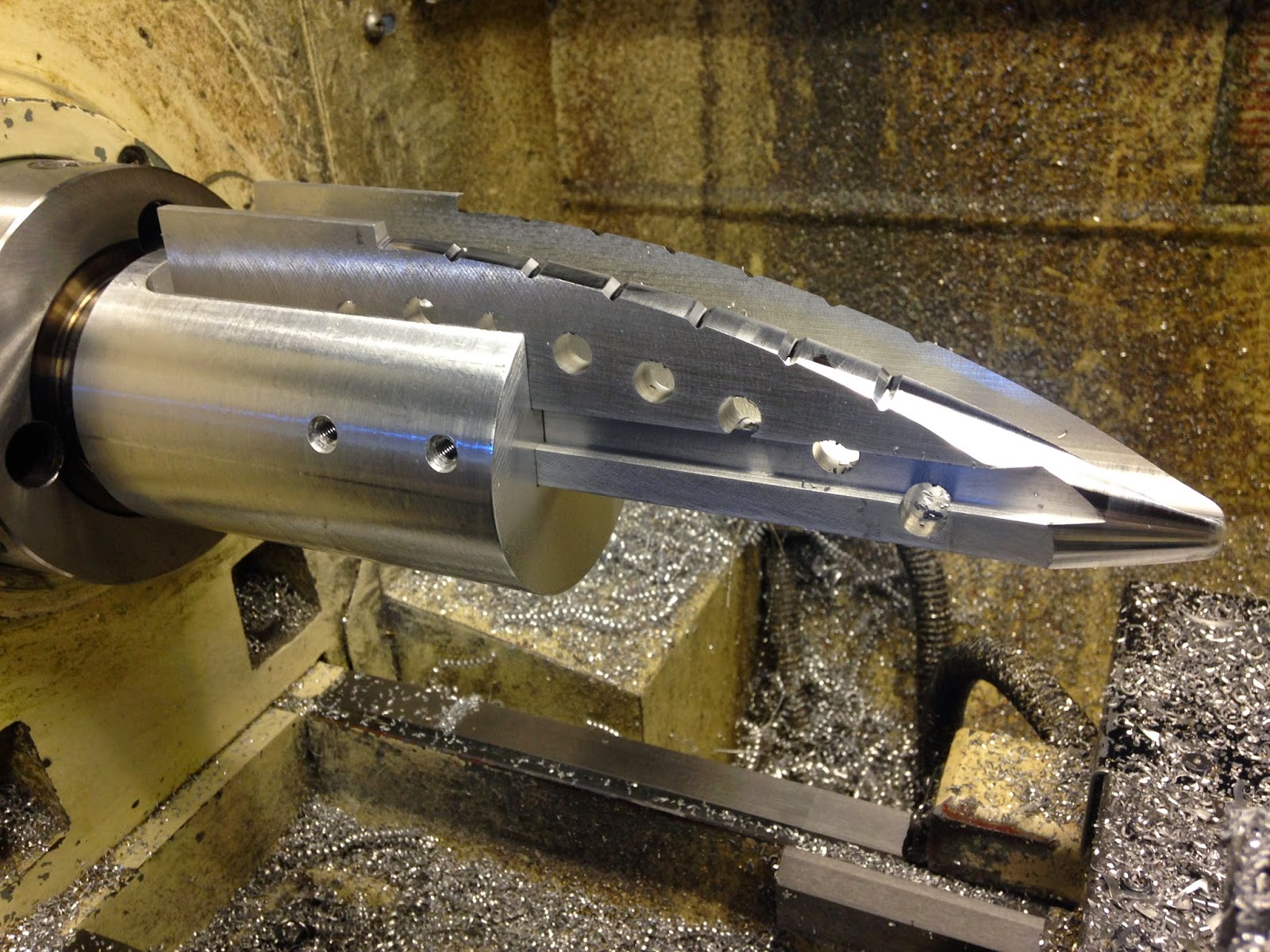 Anyhow, it all went quite smoothly considering the uncharted territory I was in. Here you can see that I was able to turn the front half of the profile in one shot. 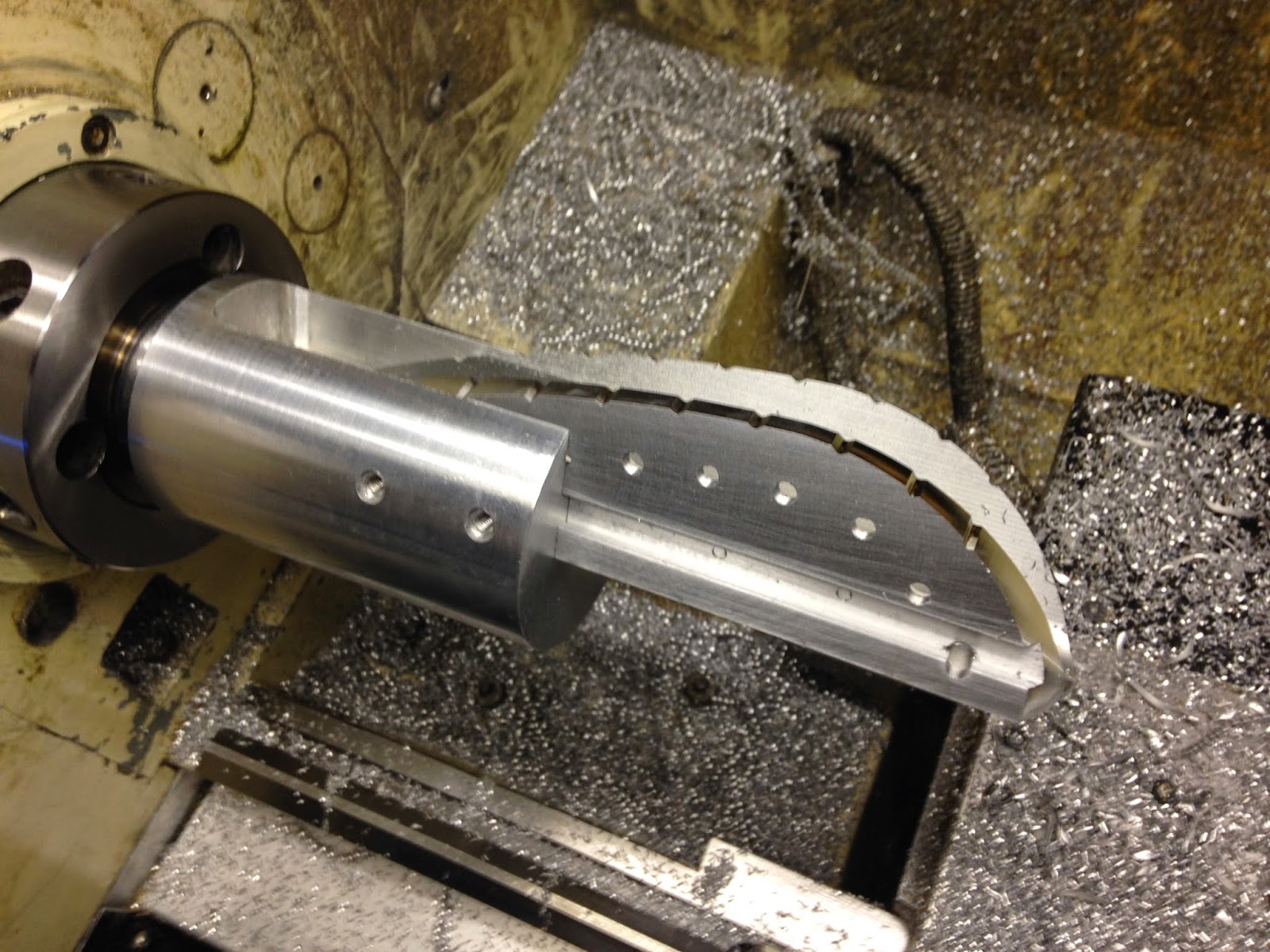 Then I simply flipped the part around, re-clamped it, and machine the back half. 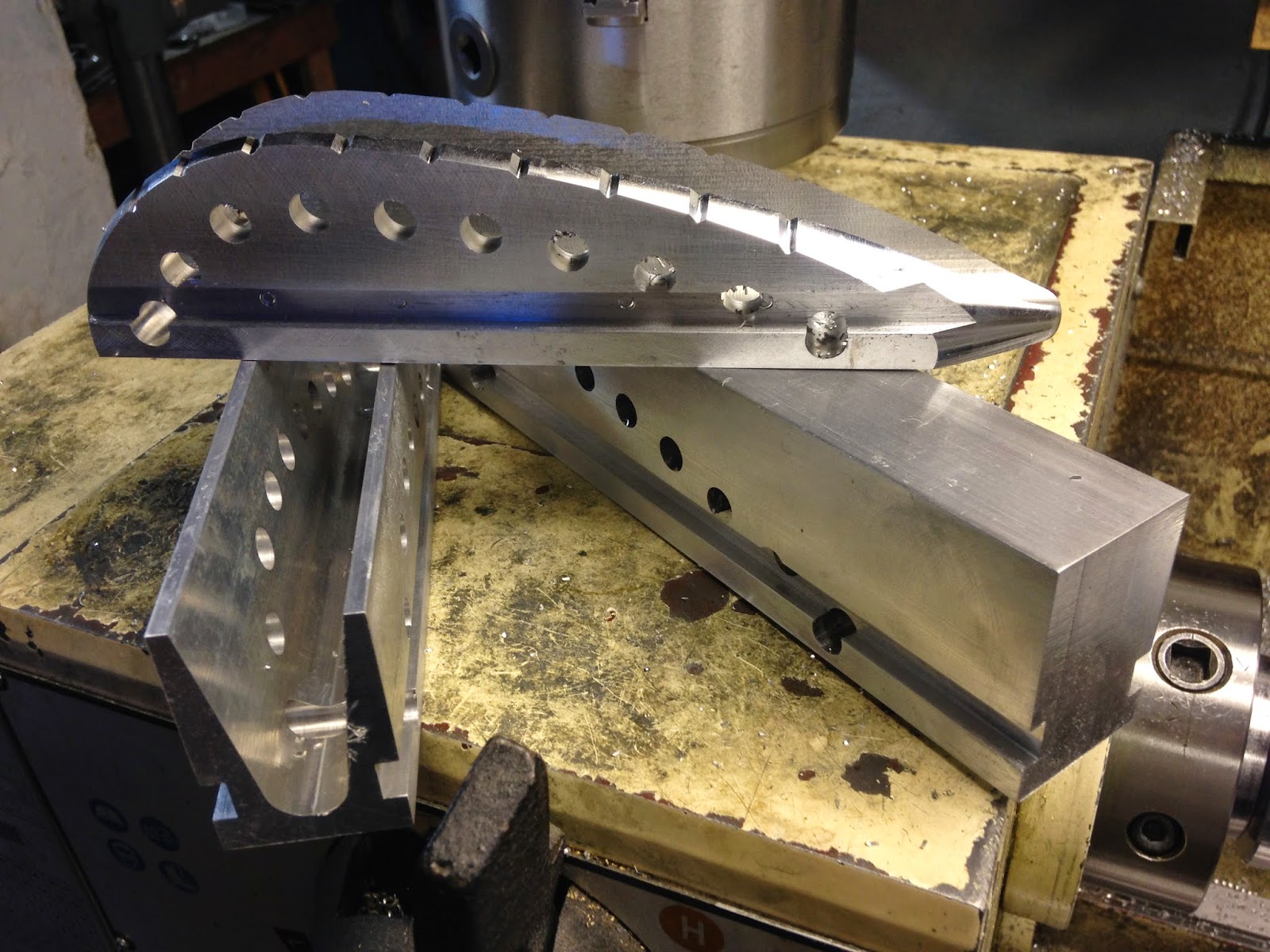 All and all it worked out much better than I had hoped , above you can see three phases of the part. The slotted and drilled blank on the right. Then the center line milled out on the left. Then the finish turning on the top center. Took about a week to get four of these all sorted out but they serve their function very well and have given me a lot of ideas on possible new works.

As always comments and questions are welcome.

Posted by Chris Bathgate at 8:22 AM