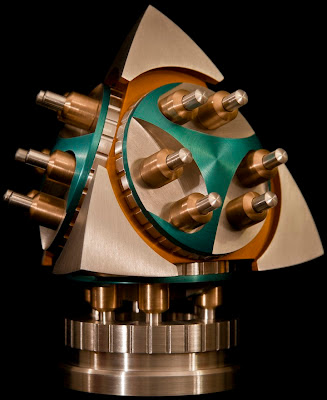 This month, I thought I would try my hand at making a triangular or tetrahedron composition, this simple enough idea proved to be challenging in ways I had not expected. I must admit I didn't even consider this at first, but triangles are a very loaded shape. They are used in more symbols and icons than is possible to count, so when I started doing drawings for this piece I quickly realized how difficult it was going to be to make something that did not unintentionally allude to or reference some other easily recognizable symbol or design. 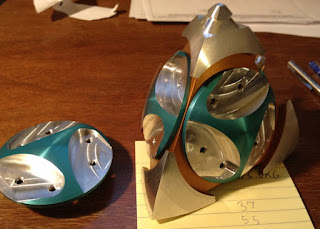 Once, I settled on a design, and began working, I ran into further trouble when I was doing some secondary operations and the work slipped out of the chuck and tore a chunk out of one of the points on the main body. Above you can see where I had machined off the damage on the top point, which was not part of the original design. I was not quite sure how to approach a repair or redesign, so, discouraged I decided to set the piece aside and work on other things while I thought over how to proceed.

To clear my head a bit, I decided to pick up on a shape I had made as a test part, and see where I could go with that, that led to this 6 piece hexaptych. These are quit small, the smallest being just 1" diameter and the largest approximately 2" tall by 3 1/2" across.

The spherical shape that is incorporated into this series was one I used as a test program when setting up my new CNC lathe. It appealed to me as something more than a test shape so I wondered about how I could do a progression of works, that would be a sort of literal evolution of that shape, each more complex than the next. I followed it to what I thought was a logical conclusion and ended up with this six piece set. I designed all of these on the fly with no preplanning so it was a good distraction to clear my head from my problem piece still sitting on my desk.

But with that now finished, I returned to the task of fixing what I had started earlier in the month. I decided it was best to just bore out the damages area and start over.
I faced off the point and drilled a hole I could insert a piece of repair stock. then machined a matching plug
I press fit it into place using a little bit of metal epoxy to make sure it never moved again
and then I set about re machining it to shape. 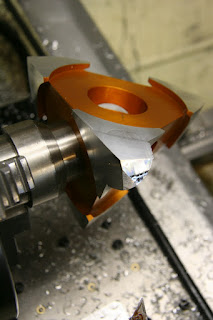 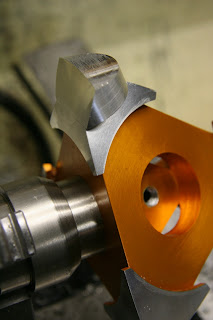 Machining two of the three sides 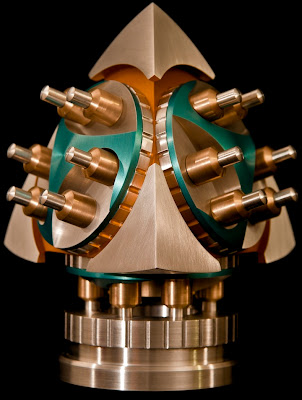 once I had finished the repair a few other modifications occurred to me that really brought the work together, the time I had taken to think had payed off a bit it seems. I added the slotted aluminum rings you see beneath the blue green disks and made the base to help fill out the design a bit. Anyway, I think I pulled it out at the end but it was a challenging piece for sure.
Posted by Chris Bathgate at 8:35 AM